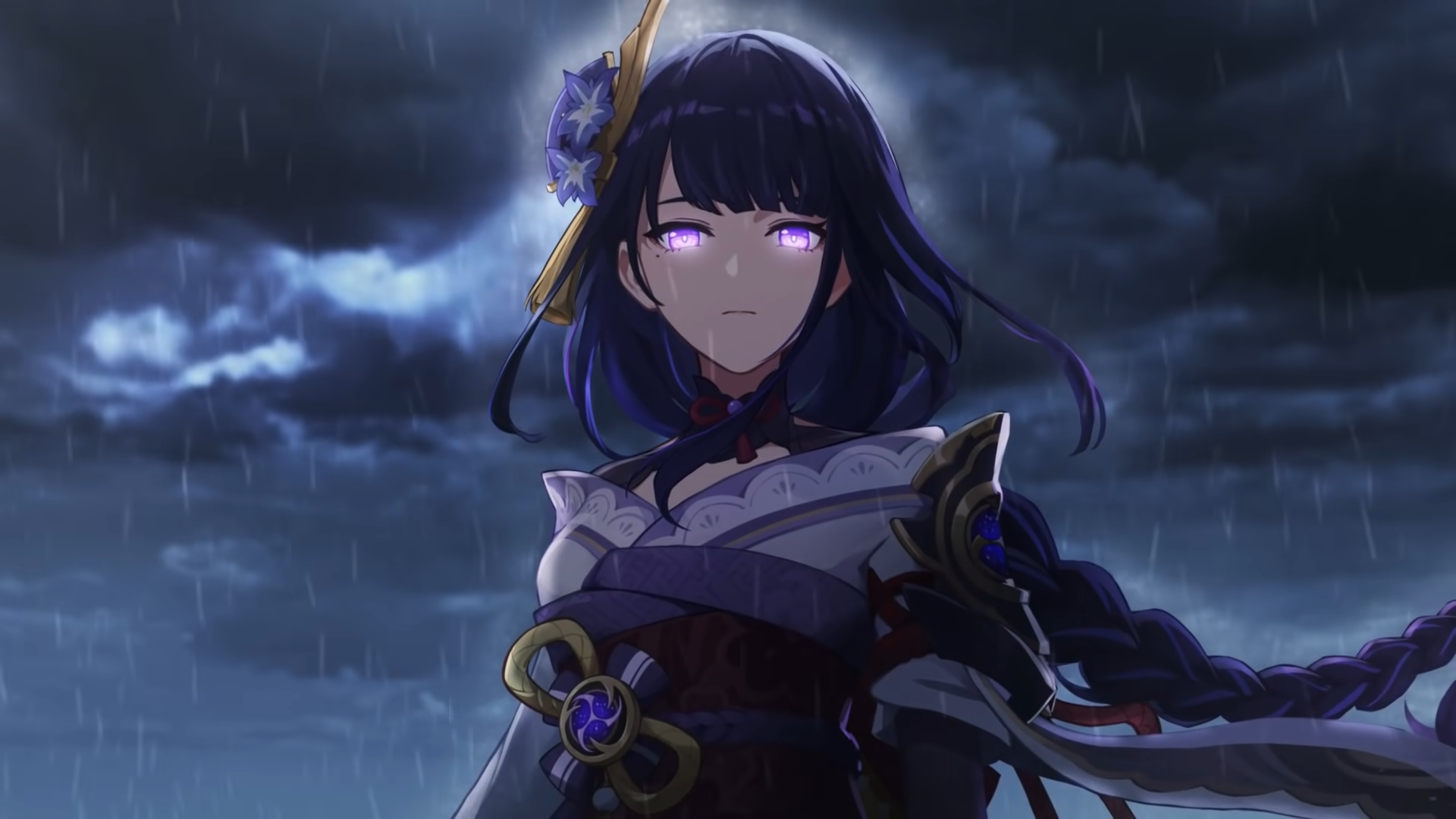 Raiden Shogun is a five-star character, the Electro Archon, and the current vessel for Ei, also known as Beelzebul or the God of Eternity. She presides over Inazuma with an iron fist due to her ultimate desire and one goal for the nation to prosper eternally.

There are two characters existing in one Raiden Shogun. Her true identity, which is Ei, exists within and is meditating in the Plane of Euthymia. The puppet, who is the Shogun, exists externally to act as Inazuma’s ruler while Ei meditates. Ei programmed her puppet under a strict set of rules that she thus operates by and the Shogun puppet views herself as Ei’s loyal assistant.

Ei’s desire for a strict, unchanging eternity in Inazuma is fueled by the many losses she has faced over the years. She is against ambition because she believes it ultimately leads to massive changes that result in suffering and loss.

While players were first essentially enemies with the Raiden Shogun and Ei, they eventually came to understand one another and now are on decent terms. Ei is also quite close to Yae Miko, who is a playable five-star Electro Kitsune who is sort of Raiden Shogun’s pet since she is a fox and the Shogun is her master.

The mighty Raiden Shogun is a favorite among the Genshin Impact community due to a combination of impressive factors. These factors include her stunning Electro violet-centric appearance, her unmatched skillset, her impressive versatility, and her intriguing storyline.

With the right build, Raiden Shogun is a powerful and versatile character able to function perfectly in any role. She is an incredible primary damage dealer, stunning secondary damage force, and excellent support character. What’s truly impressive about her in comparison to other characters is that players don’t even have to build her for one role and can instead allow her to function in many roles on any given team at once.

Despite how she appears in official art and promotions, Raiden Shogun is actually a polearm character. Players often get confused and believe she wields a sword because of these factors and her ability to materialize an Electro sword from herself in the storyline.

For the best results, players will want to equip the Raiden Shogun with a powerful polearm. Five-star weapons are certainly not easy to get, but it is worth working toward one to fully maximize Raiden Shogun’s potential. Some solid four-star substitutes are also available and will still get players decent results.

The best weapon of all for Raiden Shogun is Engulfing Lightning, a powerful five-star polearm that will enhance and expand upon her abilities. The “Timeless Dream: Eternal Stove” ability of this weapon increases attack by 28 percent of energy recharge over the base 100 percent.

Up to 80 percent of an attack bonus can be gained through this ability. The “Timeless Dream: Eternal Stove” effect also grants players a 30 percent energy recharge for 12 seconds after using an Elemental Burst.

Another solid polearm for the Raiden Shogun is the five-star Staff of Homa. The “Reckless Cinnabar” ability increases the wielder’s health points by 20 percent.

The “Eagle Spear of Justice” ability of this polearm increases the wielder’s attack by 3.2 percent for six seconds after a successful hit and can stack up to seven times. This effect can only happen once every 0.3 seconds. Additionally, when players have the maximum number of seven stacks, the damage output is increased by 12 percent.

One of the best four-star options for players is The Catch, a powerful polearm that can be easily attained by any player through fishing and purchasing it from the Inazuma Fishing Association. The “Shanty” ability of this weapon increases elemental burst damage by 16 percent and elemental burst critical rate by six percent.

The Artifacts that players choose to equip Raiden Shogun with will drastically change how she functions. Overall, players should place focus on building upon her already powerful damage output, increasing her health, and raising her elemental abilities through the Artifacts that they select.

The best Artifact Set for Raiden Shogun is the full four-piece set of Emblem of Severed Fate. The two-piece set increases energy recharge by 20 percent, which will allow players to use her powerful abilities more frequently.

Equipping the full four-piece set will increase elemental burst damage by 25 percent of energy recharge. Up to 75 percent bonus damage can be obtained through this.

If Emblem of Severed Fate isn’t what you’re looking for, the second best option is the full Noblesse Oblige set. The two-piece set increases elemental burst damage by 20 percent and the full four-piece set causes all party members’ attack to increase by 20 percent for 12 seconds after an elemental burst has been used by the character that this set is equipped to. This ability can’t stack.

Another solid option is the Thundering Fury set. The two-piece set increases Electro damage by 15 percent and is a great option to pair alongside another set, such as the two-piece Noblesse Oblige.

Regularly taking on Nobushi and Kairagi for the various required levels of Handguard is a must for players seeking to ascend Raiden Shogun. Amakumo Fruit, another required material, can be found across Seirai Island in Inazuma.

The most difficult part of gathering Raiden Shogun’s Ascension Materials is taking on the Thunder Manifestation for Storm Beads. This foe can be tricky to beat due to how powerful its Electro attacks are and how swiftly it moves, so it is recommended that players team up with one or more travelers when taking this boss on for the best results.

Players will need to gather lots of Handguard for Raiden Shogun’s Talent Materials in addition to her Ascension Materials. Taking on La Signora in “Narukami Island: Tenshukaku” is also a must for the required Molten Moment.

Various levels of Teachings of Light are another necessity for Raiden Shogun’s Talent Materials. These can be obtained on Sundays, Wednesdays, and Saturdays from the Violet Court Domain.

To raise all of Raiden Shogun’s talents to the highest level, players will need a total of 1,652,500 Mora, three Teachings of Light, 21 Guide to Light, 38 Philosophies of Light, six Old Handguard, 22 Kageuchi Handguard, 31 Famed Handguard, one Crown of Insight, and six Molten Moment.

The almighty Raiden Shogun has, as of August 2022, only been a featured character available for players to wish on twice. She is expected to return sometime in the future, but since her last rerun occurred somewhat recently in March 2022, it may be quite some time and possibly even around a year before players have a chance to wish on her special featured “Reign of Serenity” banner again.