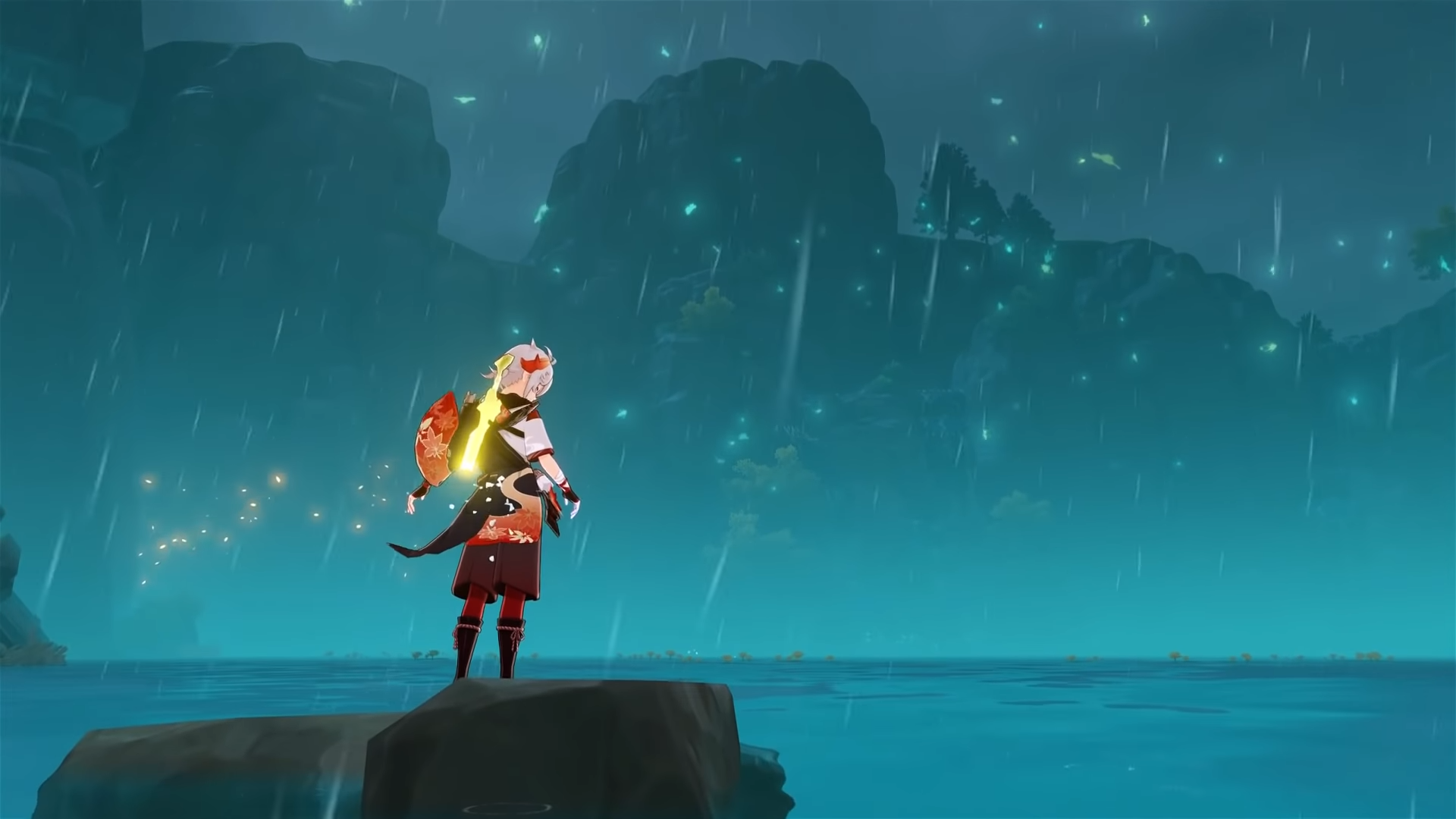 Far from it, in fact. The male characters are so appealing we had an incredibly tough time choosing just seven for this list. They are aesthetically pleasing, strong within the game, and hold epic positions in the game’s lore, which also happen to be the criteria for the picks on our list.

Here are seven of the best Genshin male characters, ranked.

List of the best male characters in Genshin Impact

Kazuha presents himself as polite and well-spoken. Compared to other noble Inazuman clan members, he would rather go outside and travel than stay indoors. At one point, Kazuha roamed Inazuma peacefully as a modest wanderer, teaching himself bladework and picking up other skills.

Just like his abilities, Kazuha’s design is based on maple leaves.

He pulls off sleek platinum blonde hair with an orange-red highlight on one side. Kazuha dons a Japanese-themed outfit accessorized with a red and black scarf. He has a variety of patterns on both his coats and pants.

Kazuha is currently left without an inheritance due to the collapse of the Kaedehara clan. It all came crashing down for Kazuha when he witnessed his friend get killed during a fight against the representation of Raiden Shogun. Kazuha has since been on the run after snatching his friend’s Vision.

Also known as Childe, Tartaglia acts as the eleventh of the eleven Fatui Harbingers. He will gladly make his way to the forefront of any sort of confrontation, always ready for battle, unlike his colleagues. He likes to describe himself as “kind of a bad guy,” living for the thrill of a fight and causing chaos.

Tartaglia is seen wearing a gray jacket with a red banner wrapped around his shoulder and chest. One side of his head sports a red Fatui mask that goes well with his blue eyes and orange hair. Tartaglia wields his large Hydro sword that rounds out his outfit with fitting contrast.

Tartaglia may possess a baby face and appear friendly on the surface, but in essence, he remains a bloodthirsty warrior. His old master, Shirk, and The Abyss made him self-confident, brash, and thriving on the sensation of playing with life and death. He is a fighter through and through and constantly seeks ways to grow stronger, regardless of how he obtains said power.

This oni makes his mark in the game and stands out from the rest of the cast. Visually, Arataki is unique due to the fact he is the tallest character in Genshin Impact, not to mention the most buff too, sporting an outfit that adequately shows off his built and chiseled torso.

Arataki has long white hair that reaches down to his upper back, and red-colored accents all over his body, including the base of his hair, the color of his eyes, and markings on his chest. Arataki’s Geo Vision is, interestingly enough, attached to a spiked choker found around his neck.

This oni is also not the brightest, but he certainly makes up for his lack of intelligence with a pure heart. Arataki even went ahead to set up an arena filled with fighting bugs to keep kids entertained. Keeping the questionable ethics of a bug-fighting arena aside, we would say that’s an incredibly lovable gesture.

Arataki is also known for having an unfortunate affinity for bad luck.

That being said, he was strong enough to take down the Tenryou Commission, and only the right-hand woman of Raiden Shogun, Kajou Sara, could stop him.

Arataki’s true potential is frightful to think of—if he wasn’t cursed with his bad luck.

Being a descendant of the Ragnvindr Clan, one of the three most prominent houses of Mondstadt, Diluc is nobility personified. Due to the winery business he runs, Diluc is also the wealthiest man in the Region of Freedom currently. Diluc may seem stoic and uncaring on the outside, but he will do everything in his power to defend Mondstadt from possible threats.

Diluc’s default skin is titled Darknight Blaze, and the name is effectively reflected in its design and color scheme. He dons a regal coat and pair of pants that are black in color, with his hair and Vision giving a pop of red.

Diluc is a former Knight of Favonius, having quit after going through a whole mess of situations involving his father, now operating on his own and basically running Mondstadt through his money, power, and influence. He is far from a corrupt person, though; Diluc uses his resources for the greater good, donning the identity of “Darknight Hero,” a hero who ventures out at night to hunt down and kill criminals terrorizing his city.

Back in his Knights of Favonius days, however, Diluc was said to be the best among all of the knights. He would probably even be Grandmaster at this point instead of Jean if he continued as a knight instead of leaving, which would have only improved his power and influence.

Kaeya acts as the current Cavalry Captain of the Knights of Favonius and is someone who you meet at the beginning of the game, during Act One of the Prologue.

This dark-skinned, blue-haired man is one of the most charming characters you will meet in the game; he has a sarcastic but kind nature that would sweep anyone off their feet, along with a bucket load of charisma.

Kaeya evidently has an amazing fashion sense. His chic clothes sport black and white colors with accents of blue all over, complementing his blue hair. His coat is adorned with a fur collar, while he wears an eye patch that only further boosts his mysterious aura.

Diluc happens to be Kaeya’s adopted brother, and the two are polar opposites of each other, with Kaeya having more of a laidback and charming personality. But even though Kaeya appears to be jolly and full of life, he is actually lonely and desires companionship. He is shown to get very happy when the Traveler shows up and reminds him that he’s always around if he needs someone to talk to. Furthermore, he turns very sulky when the Traveler needs to leave.

Xiao is a lot of Genshin players’ favorite male characters, and for good reason.

Xiao is an Adeptus whose original name is Alatus and is the only known remaining member of the five Yakshas dispatched by Morax aka Zhongli.

Xiao wears red makeup over his golden eyes, similar to Cloud Retainer and Zhongli. His forehead is adorned with a purple diamond, while his hair is teal in color. Xiao’s Yaksha mask is placed on his right hip, while his Vision is attached to his left glove.

Residing in Wangshu, Xiao loves food, so much so he has been savoring food for probably over 2,000 years since that is exactly how old he is. He has had all the time one could ever need and has used it to become one of the strongest Adepti in existence. Out of the five Adepti that Rex Lapis appointed to become Yakshas or specialized demon slayers, Xiao is the only one who remains alive or sane to this day.

Even though Xiao has had one of the most dangerous jobs in Tevyat, he has stayed alive and in his senses, which only proves further how skilled and talented this Yaksha is. Xiao can be quite prideful at times, but he has all the reason to be that proud due to how much he has achieved in the long life he has lived.

None other than the Geo Archon himself, Zhongli is simply Rex Lapis disguised in a human form. Zhongli is calm, reserved, and polite in nature, holding an air of nostalgia. He possesses countless experiences and memories as he was a god well before The Seven even existed, and is one of the oldest still living in Tevyat. He currently works at the Wangsheng Funeral Parlor.

In his human form, Zhongli is a tall man with bright amber eyes. His hair is a dark brown that fades into light brown ends, with his overall outfit also following a similar color scheme. Even though his outfit is incredibly royal, Zhongli has described it as his leisurewear, funnily enough.

Zhongli is shown to be very careless when it comes to money, and is horrible at matters of Mora, like how much to spend and when he is being scammed of extra Mora. It is later revealed that Zhongli is so bad at handling Mora because he is the very creator of Mora, with the Gnosis allowing him to create as much of it as he wanted as a god.

With an incredibly helpful role in parties and being at the pinnacle of importance in the lore, Zhongli takes the No. 1 spot on our list of the best male characters in Genshin.