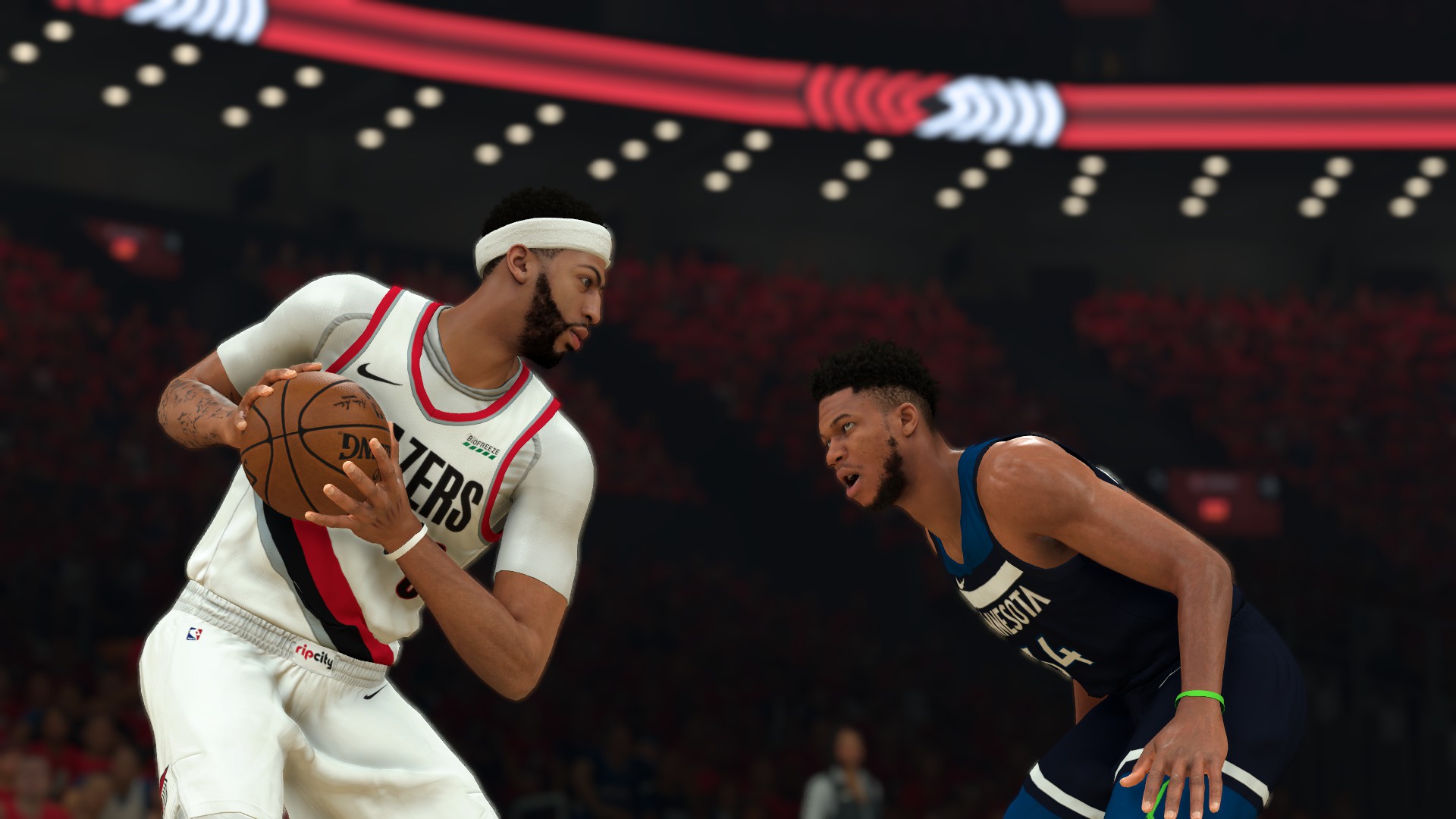 Before you start playing NBA 2K21‘s My Career mode—which includes The Long Shadow campaign, where you can play in high school games, college games, or even at the NBA G League if you’re on new-gen consoles—you’ll have to create your character’s build.

The builds are custom basketball avatars made up of pie charts that consist of four major pieces: finishing (blue), shooting (green), playmaking (yellow), and defense/rebounding (red). It’s an important part of the NBA 2K21 My Career experience because your build will determine the way you’ll play with your character.

The builds section comes after you choose your name, position, shooting hand, and jersey number. The attributes you assign to your build will determine the type of player you get. This guideline will assist you in creating some of the most dominant types of power forward in NBA 2K21 My Career. But in the end, you should use a build that fits your playing style. For example, if you’re not good at shooting, use a build that enhances the finishing abilities.

Here are the best power forward builds in NBA 2K21, starting with the least effective and ending with the best.

The 3-level scorer build is the perfect one for players who want to create a versatile character that will have great defending/rebounding, decent shooting, significant athleticism, and will also be able to finish on contact inside the paint. For this one, you’ll have to be tall and agile, so go with six feet eight inches and around 195 pounds. Set the wingspan the maximum so it compensates for your lack of height compared to bigger men that will try to bully their way inside the paint.

Don’t spend on playmaking and put most of the points on shooting and defending/rebounding, so you have around 19 badges of each, and use the rest on shooting. With this build, you’ll have a player that can threaten to score from mid-range and three-point range, which will create space for teammates who like to infiltrate and dunk. Be sure to allocate a lot of points on Free Throw (around 85), because your adversaries will certainly commit a lot of faults to stop you.

Your player will excel at close shots (87) and will be fairly good in standing dunk (83) and driving dunk (75). You’ll not be a specialist of any sort, however, you won’t let your team on any aspect. Perhaps this build isn’t the best one if you’re aiming to be a star player, but one to complement the team you want to play.

This build is made for players who want to play small-ball as your player won’t have a lot of strength nor will have the average height of a power forward. But he’ll sure move fast in the court and have the ability to infiltrate and make layups and dunks.

To create a post playmaker, you’ll need to choose the pie chart that is mostly split between finishing and playmaking then proceed to the physical profile and select the pie chart with more agility, and a bit more vertical than strength. Set the height to six feet seven inches, around 180 pounds, and maximum wingspan, so it helps you to block taller and stronger big men.

Allocate your attributes mostly to playmaking, then focus on finishing, and put the rest on defending, so you can get some quality badges like Intimidator. You won’t have any shooting skills, but it doesn’t care, because your character will have 89 speed and 86 acceleration to move past the defenders and score from inside. With the attributes, we said, your character should have high close shot (93), standing dunk (93), driving dunk (86), and driving layup (87).

You’ll still be able to catch some rebounds and attempt some blocks, but your interior defense will be lackluster, meaning that some big men might force their way inside the paint against you. Many people don’t play with post playmaker, but this certainly is a great build as your player will remind the playing style of Blake Griffin and Zion Williamson.

The interior finisher build hits hard if you grew up watching NBA in the 90’s and early 2000’s, where Shaquille O’Neal would run the show on the court. This type of build abdicates from any shooting and playmaking stats to focus on finishing to create the ultimate post scoring type of player, letting you use your height and strenght to force your way towards the rim.

Go with at least seven feet, maximum weight, and maximum wingspan. These physical attributes will allow you to have a machine inside the paint, excelling in close shots (90), post hook, and standing dunk. Save your playmaking and shooting points to invest the rest in defending/rebounding, especially in interior defense, block, and defensive rebounding, which will truly frustrate your opponents.

You might struggle in the beginning of MyCareer with this build as your character won’t have as many points invested in the scoring department and will move slow, so be sure to help your team by setting up screens to boost your grades and catching every rebound you can. This way you’ll quickly earn virtual coins (VC) to spend on his finishing attributes and start dropping 30-points per game with ease.

Do you enjoy the current state of the NBA where the big men leave the paint to score from the perimeter? It’s different from the old days, where they would just set up screens and finish on contact, so this type of player has changed the meta of the real NBA. Almost all of them nowadays know how to effectively shoot the ball outside of the paint, and some even become a reliable three-point shooter. The stretch four is a build made to attack, so your character will be average at best when defending.

Create a player around six feet eight inches and reduce the weight down to 185 pounds because he isn’t going to play inside the paint anyway. Set the wingspan to 87 inches to help with his shooting mechanics and start spending as many points on shooting as you can: mid-range shot (87), three-point shot (86), and free throw (93).

Aside from shooting, your player won’t really threaten in any other area. You will, however, end up unlocking some defensive badges after a few matches, which will help your character to defend better, even though he isn’t a rim protector. The advantage of the stretch four is that most of your adversaries will be too slow to leave the paint and stop your mid-range and three-point shots. The stretch four is perfect if you want to have shooting mechanics as good as Kevin Durant does.

The glass cleaning build is the exact opposite of the inside-out scorer. You won’t be able to create a lot of scoring opportunities for your teammates and your shooting skills will be awful, but you’re going to be incredibly dominant inside the paint since you’ll spend the majority of your points on finishing and on defense/rebounding. Expect a player that can strong-arm other power forwards and perform a lot of driving and standing dunks, which will generate a lot of fans and facilitate your way into the endorsement deals.

Go with six feet 10 inches, minimum weight, and maximum wingspan. These physical attributes will enhance your player’s abilities inside the paint: close shot (86), driving dunk (84), and standing dunk (95). Spending the minimum you can on shooting and playmaking means that you’ll not be a great mid-range and three-point shooter nor will give flashy assists to your teammates. But you can still use your body type to set up screens for your team, which will allow the ball handlers to effectively shoot from a three-point range.

With maximum wingspam and a total of 30 defending/rebounding badges, your character will exceed in block (95), offensive rebound (95), and defensive rebound (95) once you become a star player in the league and maximize all of these stats.

This is one of the best offensive builds in the game since it’ll allow you to score from anywhere on the court. Your player will have superb shooting skills, decent speed for a big man, and average defense/rebounding and playmaking. Your player will be a three-point and mid-range specialist, which will force your opponent to leave the paint, opening space for your teammates’ dunks and layups. Your player, though, won’t be able to bully their defender inside the paint and finish on contact nor will stop big players like Domantas Sabonis from scoring.

This build of inside-out scorer means that you won’t be among the stronger power forwards in the game, since we recommend you to create a player with six feet eight inches, minimum weight, and maximum wingspan. The focus must be on putting a lot of points on his shooting stats so you end up with 26 shooting badges. You should spend points on finishing just to get one badge and split the remaining points in playmaking (post moves, ball handle, and pass accuracy) and defending/rebounding (defending rebounding, block, and interior defense mostly).

The last screen is the takeover menu, in which you choose a badge that will boost your player’s stats when you’ve done several consecutive good plays in a match. Just pick the one that fits your playstyle the most and you’ll have a player similar to some of the best power forward shooters such as Julius Randle and Tobias Harris.