The free-to-play battle royale is set in a futuristic universe and features fast-paced combat mechanics, which most fans of the genre are familiar with from Apex Legends. In addition to all the weaponry scattered around the map, players can also loot abilities named hacks. These grant them perks like teleportation and invisibility.

Its fast-paced combat or the lootable abilities aren’t the main things that set Hyper Scape apart from its competition, however. Ubisoft also released a Twitch extension, CrownCast, which allows viewers to vote for specific events that happen in a streamer’s game

Some of these events modify how high the players in the match can jump, give everyone a wall-hack for all players that lets them see each other’s locations, or grant everyone infinite ammo.

How to cast your vote for an in-game event in Hyper Scape?

When you hop onto a stream, the first thing you should do is to check whether the streamer has the CrownCast Twitch extension enabled or not. You can verify this by glimpsing over to the top left corner of the media player.

If you see the above dropdown menu, it means you’ll be eligible to vote the next time an event is about to happen. 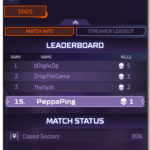 Once the voting period starts, you’ll be greeted with three different events that will pop up on your screen’s left side. At this point, you’ll be able to see what people are voting for, and you can also cast your vote by clicking on one of the events.

After the voting period ends, the event with the highest vote gets chosen and queues to happen in the streamer’s match.

If you can’t vote or even see the CrownCast extension, it might be that the streamer you’re watching isn’t using the feature. In cases where you know that they have it on, make sure that you’re logged into Twitch, have your ad blocker disabled or paused since there’s a slight chance that it can detect Twitch extensions ads.

The CrownCast application lets each player be a part of a match they aren’t in and makes every game unique in its own way. You can also use the extension check your favorite streamer’s current loadout in a match.

Both Hyper Scape and CrownCast are still under development, so Ubisoft can add other events into the game during or after its release.