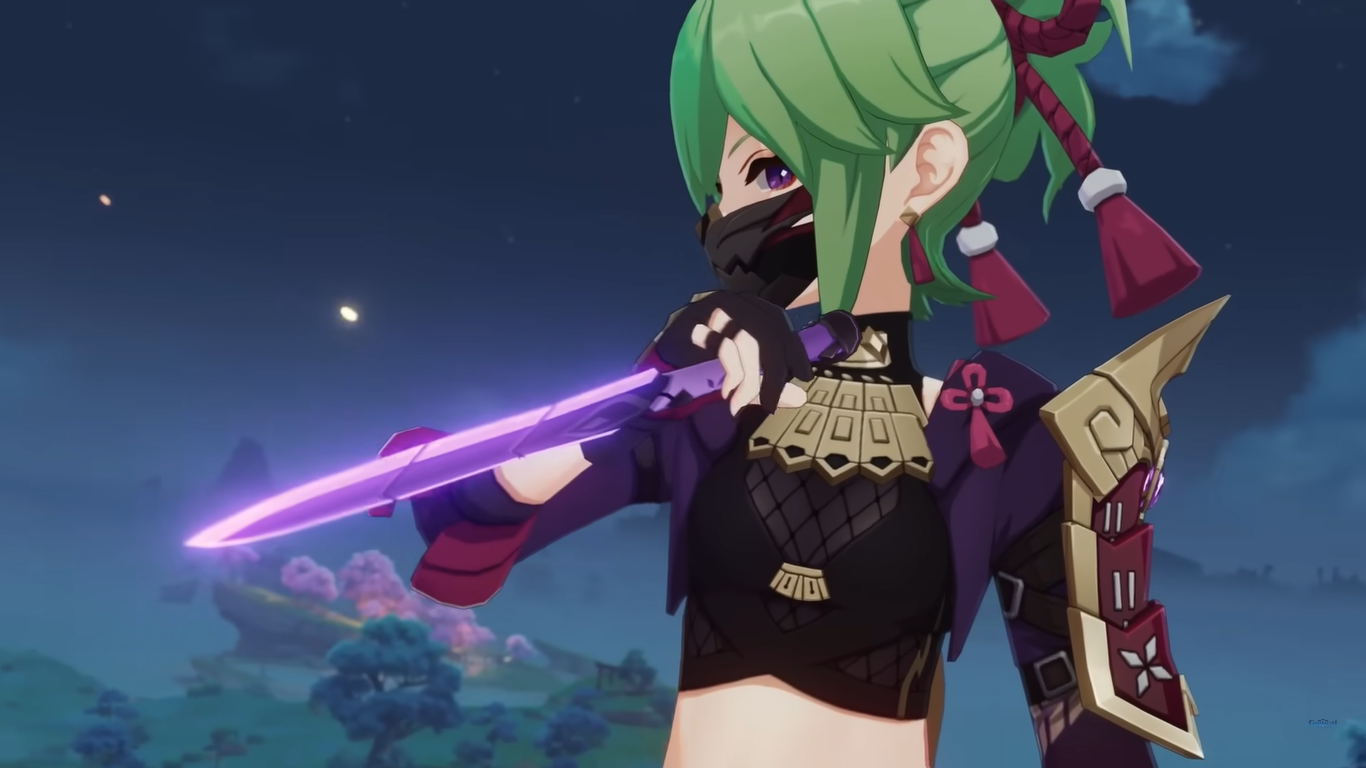 Four-star Electro Sword character Kuki Shinobu is the latest addition to the world of Teyvat in Genshin Impact. Although she has been teased by miHoYo for quite some time, her official debut is finally set to occur following the end of Yelan and Xiao’s banners on June 21.

Ahead of her release, miHoYo released a trailer highlighting Kuki Shinobu’s personality and showcasing her abilities. Kuki Shinobu is introduced in the trailer as the “one member of the Arataki Gang who actually has their head screwed on” by Arataki Itto and is regarded as the containing force of the Arataki Gang’s otherwise relentless chaos.

“Kuki Shinobu doesn’t go looking for trouble, but it always finds its way to her via the company she keeps,” Arataki Itto further reveals in the trailer.

The Arataki Gang’s unrelenting antics are usually contained thanks to Kuki Shinobu. While she doesn’t necessarily enjoy having to get them out of complex situations, the freedom she gains from being a member of the group makes any trouble she has to set right worth it. Kuki Shinobu was supposed to follow in her family’s footsteps and become a shrine maiden but instead chose to join the Arataki Gang to create her own path.

The four-star Electro Sword character is set to appear alongside Arataki Itto on his special feature “Oni’s Royale” banner. Considering that she is regarded as his sidekick, Kuki Shinobu is the Deputy Leader of the Arataki Gang and has “a wealth of experience cleaning up after others,” specifically the Arataki Gang.

All of Kuki Shinobu’s unique abilities were also unveiled through the trailer and are as follows.

Kuki Shinobu’s Elemental Skill allows her to create a Grass Ring of Sanctification. This Grass Ring costs her some Health Points but turns those points into Electro Damage against nearby enemies. The Grass Ring also follows whichever character is currently active in a manner similar to Barbara’s healing Elemental Skill.

Kuki Shinobu’s big Elemental Burst ability place an “evil-excoriating blade” into the ground to rid the area of “all that is foul.” This means that her Elemental Burst will deal consistent Electro Damage to enemies that are nearby within the Area of Effect based on her maximum Health Points.

If Kuki Shinobu has less than or equal to 50 percent Health Points when she uses her Elemental Burst, then the field of Gyoei Narukami Kariyama Rite will last for a longer period of time.

Kuki Shinobu’s passive ability is an Exploration Talent that allows her to gain 25 percent more rewards from Expeditions in Inazuma that occur for 20 hours.

The trailer for Kuki Shinobu highlights her as an ideal support character perfect for bolstering her fellow teammates. Kuki Shinobu’s abilities allow for healing support, as well as efficient Elemental Reactions since her abilities can be on the field even when she isn’t.

In keeping with their usual pattern, miHoYo also unveiled a more theatrical trailer for the Electro character. This trailer doesn’t explain any of Kuki Shinobu’s specific abilities but instead shares more of her story and demonstrates her dominating the battlefield.

Kuki Shinobu will appear with an increased drop rate on the “Oni’s Royale” banner that launches on June 21. The banner will be around for about a bit less than a month and Kuki Shinobu will then be moved to the standard permanent wish banner as is the usual pattern for four-star characters. This means that players hoping to recruit the Electro Sword character will have ample means to do so as long as they have Primogems.