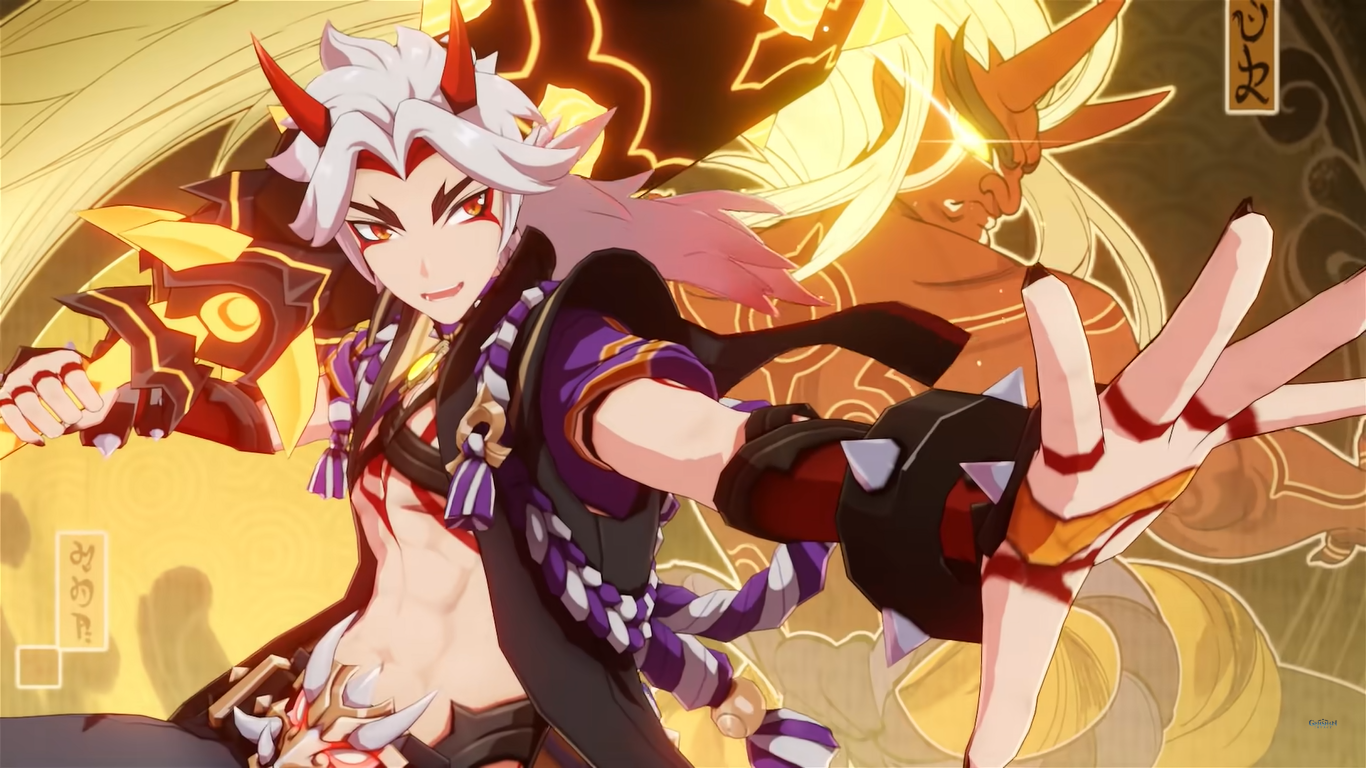 Arataki Itto comes off as bold and abrasive at first but is actually an honorable hero determined to do what is right. While Geo characters in Genshin Impact are usually regarded as support characters there to boost and help the more powerful members of the team, the five-star Claymore character proves that Geo is a dangerous damage-dealing force to be reckoned with.

The Geo Claymore character is also the leader and founder of the Arataki Gang of Inazuma. Arataki Itto says the group is for those who have been deemed outcasts by society, but the general consensus among Inazuman natives is that the Arataki Gang is instead just a group composed of Itto and his friends for fun.

Arataki Itto is a strong damage dealer that will function flawlessly as the primary damage dealer of a team when both the team and himself are built right. Building upon Arataki Itto’s Defense, Geo Damage, Health Points, and other kinds of Damage output should be the primary focus when choosing what to equip the Geo character with.

Arataki Itto is a powerhouse when it comes to dealing high levels of damage. As such, the weapons that will function best when equipped to him are those that build upon his massive damage and increase his Elemental abilities. Because Arataki Itto is a Geo character whose Element provides shields for his team against other Elements, increasing his Geo and Defense abilities when choosing his claymore is also essential.

The best choice of any claymore in Genshin Impact for Arataki Itto is Redhorn Stonethresher. This five-star claymore builds upon Defense and Attack to increase Arataki Itto’s overall functionality.

Redhorn Stonethresher’s “Gokadaiou Otogibanashi” ability increases the wielder’s Defense by 28 percent. It also increases Normal and Charged Attack damage by 40 percent of Defense which makes it an overall great choice for building upon Arataki Itto’s abilities.

This five-star claymore builds upon Shield Strength and Attack. The “Golden Majesty” ability increases Shield Strength by 20 percent making them stronger and more effective for the entire team. When the wielder hits an opponent, Attack increases by four percent for eight seconds for up to five stacks.

The “Golden Majesty” ability can occur once every 0.3 seconds. When the character wielding this claymore is protected by a shield, the Attack bonus effect increases by 100 percent.

The Skyward five-star weapon set is always a solid choice for nearly every character. Skyward Pride’s “Sky-ripping Dragon Spine” ability grants an overall Damage increase of eight percent. When the wielder of this sword uses a Normal Attack, Charged Attack, or Elemental Burst and successfully hits an opponent a vacuum blade will activate that deals 80 percent of Attack as Damage. This effect will last for 20 seconds or for eight vacuum blades.

This four-star claymore is an easy and solid option that any player can obtain through forging. The “Infusion Blade” ability of this claymore increases Attack and Defense by six percent for six seconds after hitting an opponent. Up to four stacks, and thus a 24 percent bonus, can accumulate once every 0.5 seconds.

Claymore-wielding characters come with the immense drawback of low health to balance out their unmatched damage output abilities. To counteract this, players should heavily focus on building Arataki Itto’s heath up by equipping him with artifacts that will increase his health. Artifacts that have percentage Health Points bonuses, Defense bonuses, and Attack bonuses will work wonderfully in helping Arataki Itto stay alive while dealing high levels of damage on the battlefield.

The Retracing Bolide set is a powerful choice for a Geo character focused on damage output. The two-piece set increases Shield Strength by 35 percent. The four-piece set grants a 40 percent Normal and Charged Attack bonus when the character this set is equipped to is protected by a shield, which will happen consistently due to Arataki Itto’s Geo abilities.

This Artifact set builds upon Defense and Geo abilities. The two-piece set grants a 30 percent Defense bonus. The full four-piece set grants the “Curiosity” effect which can be obtained as stacks by meeting certain criteria.

The 35 percent Damage bonus is obtained when a character gains an Elemental Shard from the Crystallize reaction. Characters will then gain the bonus for 10 seconds but only for the specific Element that the Elemental Shard is for. This means the full four-piece set is generally not the best choice for Arataki Itto unless players are specifically looking for this effect, but the two-piece is a great choice to equip alongside another set.

If you’re simply looking to build upon Attack, the Gladiator’s Finale Artifact set will suit your needs for Arataki Itto best. The two-piece set increases Attack by 18 percent. The four-piece set grants a 35 percent Normal Attack bonus for characters who wield a Claymore, Sword, or Polearm.

Arataki Itto is generally agreed upon as one of the best characters in Genshin Impact by those in the Genshin community but as such, it is unsurprising that he requires some difficult materials in order to be upgraded. This is more due to the fact that he is an Inazuman character and thus requires resources from Inazuma rather than an easier early game area with less difficult foes like Mondstadt.

The required materials to fully ascend Arataki Itto to the highest Ascension level can luckily be broken down across each individual Ascension level and over time. This means players can consistently work their way toward leveling him up rather than needing the total amount of Ascension materials at once.

Some of Arataki Itto’s Talent Materials are extremely easy to attain, such as the various Slime droppings, while others will require much more work, like the Ashen Heart from taking on the formidable La Signora. In addition to these, players will also need to regularly visit the Violet Court Domain on Tuesdays, Fridays, and Sundays to attain the various levels of Teachings of Elegance.

Getting all of Arataki Itto’s talents to the highest level possible requires a total of 1,652,500 Mora, six Slime Condensate, 22 Slime Secretions, 31 Slime Concentrate, three Teachings of Elegance, 21 Guide to Elegance, 38 Philosophies of Elegance, six Ashen Heart, and one Crown of Insight. This is a lot of materials and as such it will likely take players quite some time to gather them all.

Arataki Itto has only had one banner run as of June 2022. However, the special events and stories that were released in Version 2.7 of Genshin Impact indicate he will likely have his second rerun sometime in June or July 2022. The Geo characters’ special event banner “Oni’s Royale” will likely have several more reruns in the future beyond Version 2.7 as is the usual pattern with five-star characters in Genshin Impact.