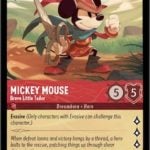 Expected to compete against trading card games like Magic: The Gathering and Pokémon TCG, Disney is showing off seven of Lorcana’s cards at the D23 convention.

Slated to release in the fall of 2023, Disney Lorcana: The First Chapter already has a collector set of seven cards available for players and fans at D23 this weekend. Similar to collector cards released by WotC through Secret Lair, Disney has compiled a total of seven foil cards showcasing unique art for the upcoming trading card game.

Related: What is Disney Lorcana? Here’s what you need to know about Disney’s collectible trading card game

All seven cards are a part of a special collector’s set, showcasing artwork from illustrators like Simangaliso Sibaya, Nicholas Kole, Luis Huerta, John Loren, and Marcel Berg. Each card has a unique foil treatment and first-edition symbols. The price for the first Lorcana collector’s set is $49.95. Purchasing the D23 Lorcana collector set outside of the convention will not include the Mickey Mouse, Brave Little Tailor card.

No official rules for Lorcana have been released by Disney yet, but there are several aspects that stand out on the seven cards revealed today. The cost to cast a card is in the top left corner while the power and toughness are located within a circle and shield to the left of the card’s name.

Special abilities are located in the text box and highlighted. Card types and a special symbol are located under the card name, and each Lorcana card has flavor text at the very bottom.

Fans can see the cards in person and purchase the first Disney Lorcana: The First Chapter collector’s set at D23, which is taking place from Sept. 9 to 11.

All images via Disney and Ravensburger.