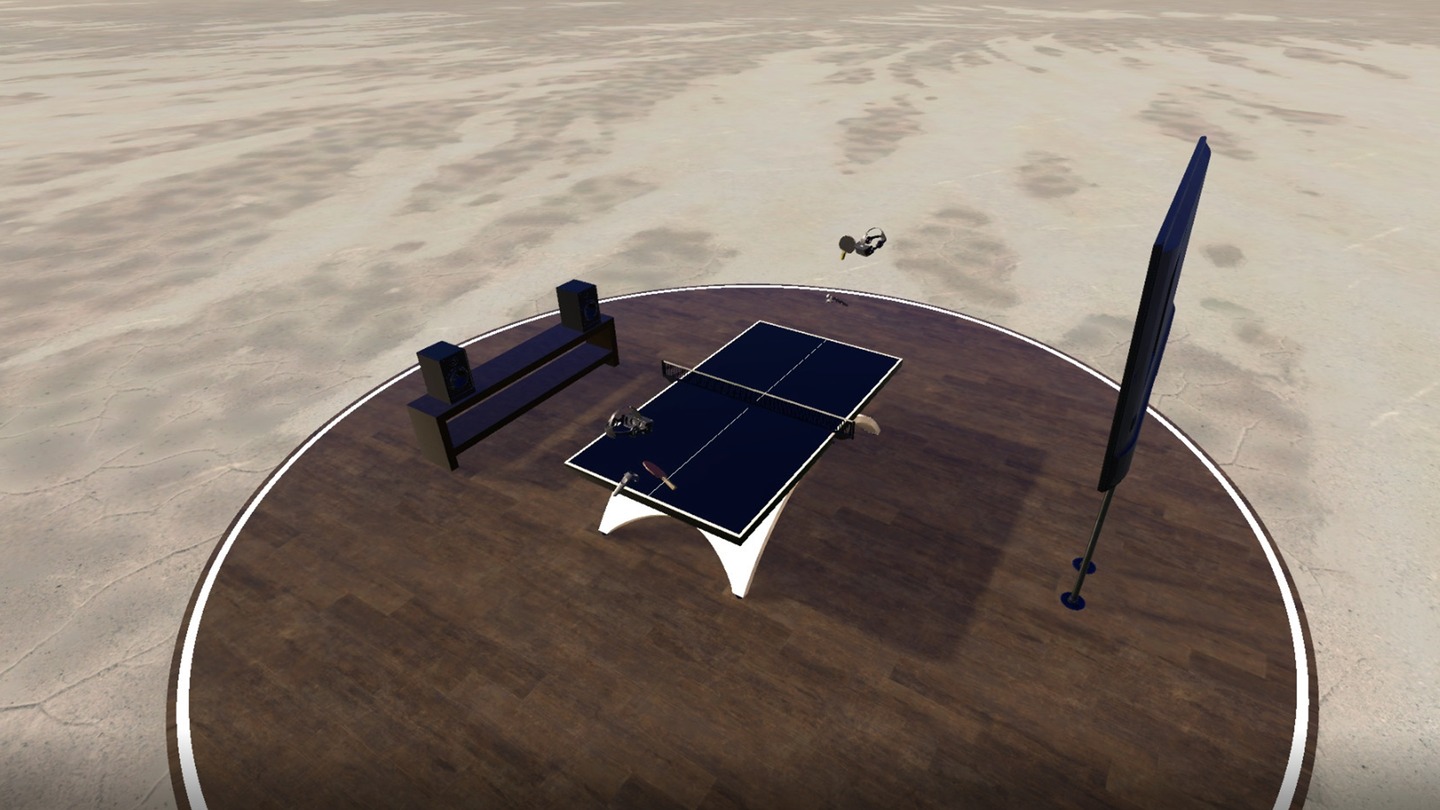 Image via For Fun Labs

VR is one of those technologies that has been paying off over time. The gaming industry is experiencing an explosion of new markets as games become bigger and more intricate. There are already a lot of games out there that provide an awesome experience.

Oculus VR users can see a wide range of good and bad games on the experiences page of the Oculus website. Finding a good enough experience can be difficult, and you would not want to waste your time looking.

Therefore, we have created a list of the best games you can get for your Oculus today.

Eleven: Table Tennis VR does everything perfectly, and it makes a lot of sense to make a table tennis game for VR. The paddles follow your hands and allow you to hit the ball as if you were really doing it. The game knows when you had barely touched the tip of the ball to when you spiked it with a slight turn, and it reacts exactly how the ball would react in real life.

There are many games on this list, but this one is the only one you will play and feel should replace real life. If you are considering buying a table for table tennis, you would be better off getting this game since it has everything you need without the large table.

Megaton Rainfall has you fight against an alien threat as a superhero. Unless you blow up their machines, stop their bombs, and stop them from hurting innocents, you will watch them die. The biggest part of the game is that it shows how hard it is to use your powers for good since you could easily miss a shot or hit and do more damage than the aliens.

Megaton Rainfall became popular on TikTok as players showcase the game’s true potential. As opposed to being the superhero, players have shown how much fun it is to be the supervillain, destroying the city on purpose and causing destruction just for fun.

Gorn is a lot more silly and bloody than most of the entries on this list. You’re a gladiator in the arena, and your job is to kill the other gladiators. This may seem serious on its own, but when you get wolverine claws or knock someone into a spike wall, you realize it’s all pretty slapstick. The game aims to lessen the seriousness of combat while presenting a more realistic version of it.

As opposed to most sword and shield games that make everything light and easily usable, the weight of the sword and weapons are taken into account when you swing. If you want to hit your enemies more precisely, you need to counterbalance the weight of your weapon with your swing. Due to the realism, the game could feel too bloody, but since they’re cartoon people, it seems more funny than horrifying.

Blade & Sorcery: Nomad plays like Gore, but in a more realistic setting and without realistic movement. The player traverses dungeons, towns, and other areas as they fight enemies in this swordplay adventure. You can use any weapon you see, even those your enemies use, and once you get the hang of it, replayability skyrockets. This is a very popular game on TikTok, with players showing how merciless they can be to defenseless NPCs.

The unfortunate part is that it isn’t very good at translating body movements if you are going too fast, and if you play long enough, you will see the chips in the armor. The game has many physics issues, and you don’t have to hit an enemy hard to kill them. Players have bounced swords on the ground and still killed their enemies, so suspending disbelief is needed.

We haven’t experienced the futuristic sports promised by movies and books, but VR may give us a glimpse of them. Echo VR is a sci-fi sport in which you and some friends jump around an area trying to get a disc into a goal. You can navigate through the rocks throughout the play zone by jumping from them.

There is a lot of fun to be had in this game, especially the obstacles and zero gravity movements. You feel like you’re flying through space as you compete with other players, hit them to disorient them, and try to pass them to toss your disc into the goal.

Beat Saber is a well-known name in VR Circles. A Beat Saber, which looks exactly like a lightsaber, is used to slash notes that match the beat of a song. You have two sabers, and every note requires a certain saber to hit it, increasing the level of complexity in the game. This VR game requires players to avoid laser walls and stay immersed in the music if they want to succeed.

It is fair to say that Beat Saber was awesome when it was released, and people still think of it when they consider VR. As VR becomes more immersive and games become more complex, Beat Saber is beginning to seem like a one-trick pony.

As VR games evolve beyond arcade experiences, they are becoming full-fledged stories in their own right, and Vader Immortal: A Star Wars VR Series is one of them. It is not the full Jedi simulator it appears to be but is instead a story that players can experience with a lot of Jedi action. Though there are gameplay elements, the focus is on exploring Mustafar, specifically Darth Vader’s castle.

In the game, the player experiences lightsaber combat, which is a lot of fun, but if you want the full Jedi experience, you can use your lightsaber as long as you’d like at the Lightsaber dojo in the game.

Those who want to experience Stardew Valley or My Time at Portia in virtual reality should check out A Township Tale. You find a beaten-down village, and you must turn it into a productive and self-sustaining town. Build up your town to be the best in the world by interacting with other villagers, gathering resources, and defending it.

While the game is still in development, it’s easy to see that what’s already there expands on what VR games have done before. This is the game for you if you are looking for a Stardew Valley-like virtual reality experience.

Resident Evil 4 VR sparked a lot of anticipation, mainly because people were eager to see if it would work. It did, and it worked very well. It’s got everything the original had, but it’s been reworked to give players a full experience of doing everything for themselves. Now you have to reload your weapon, grab the equipment you need when you need it, and aim yourself.

In VR, the weapon combat functions better, and you’ll find it much easier to defeat enemies than in the original. Several players struggled and panicked when they faced unfavorable odds and grabbed the wrong weapon or couldn’t keep themselves from panicking. We believe that this means the game is that much more realistic, and you will feel nervous from time to time.

If you’ve watched John Wick or The Matrix, you’ll want to be a cool hero with bullet-time speed, and Superhot VR lets you do that. In this game, you have to dodge a variety of enemy attacks in slow motion, such as bullets, punches, or anything in between.

As you maneuver through your battlefield, you need to kill your enemies, and that can be as simple as shooting them or punching their heads out of their bodies. This is a really great game to feel like the chosen one but be warned that it takes a lot of real-life space to play because you have to move your body at weird angles to dodge.

Population: ONE is the VR battle royale experience. Your mission is to land on an island, grab weapons, and kill your opponents until you are the last one standing. A HUD in front of you tells you everything you need to know about your health, shield, and what direction you’re facing. Each weapon has its own information displayed on the HUD, and the only other thing you care about is killing other players.

In addition to what other battle royale games do, players can climb surfaces for a better view of the arena. Its graphics are cartoony but aren’t as stylish or great as Fortnite, so it looks dated.

If you have an Occulus VR headset, it’s hard not to recommend The Walking Dead: Saints and Sinners. There is the feeling that you are playing a full-featured game, but you can do whatever you like, however you like. In Walking Dead: Saints and Sinners, players must move through New Orleans, trying not to get bitten and killed by the zombie horde that resides there and avoiding deaths at the hands of other survivors.

This is the game for you if you’ve ever wanted to experience a zombie apocalypse. There is a great campaign, but you can also play the Trial Mode, which requires you to survive against hordes of zombies for as long as possible.