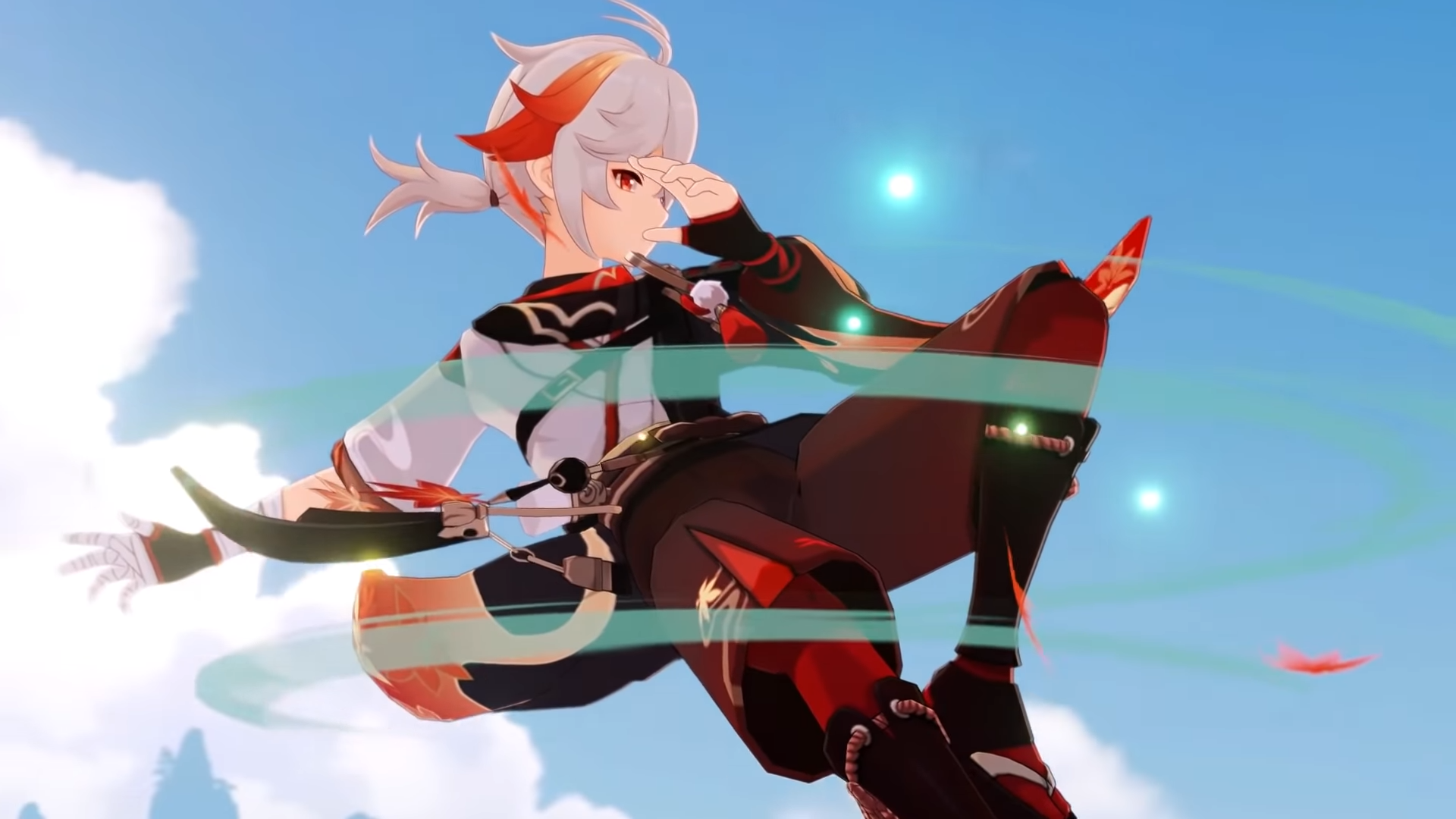 Kaedehara Kazuha is a carefree, mighty force hailing from Inazuma that hides many traumas behind his easygoing, breezy personality. He is a samurai from the Kaedehara Clan but is currently a crewmember of The Crux thanks to Captain Beidou’s hospitality.

While most noble Inazuman clan members prefer to stay inside, Kazuha loves wandering, traveling, and exploring the world. His travels have helped him become very attuned to nature which helps him easily sense shifts in his environment. Kazuha’s assimilation with his environment aids him in both sensing danger and reading people with ease.

The biggest trauma that plagues Kazuha is the loss of a close friend he made during his travels. The friend’s name is unknown, but Kazuha shared with the Traveler that his friend was an Electro Vision bearer who was executed by the Raiden Shogun after he challenged Kujou Sara in a duel for the throne and lost.

Kazuha is a five-star Sword character with an Anemo Vision. The Genshin community regularly refers to him as a “battery” who helps bolster and charge his fellow teammate’s abilities all while dealing excellent damage and serving as an all-around solid support.

Kazuha is generally regarded as one of the best overall characters in Genshin Impact by the Genshin community. His Anemo abilities make elemental reactions a breeze and his balance between support and damage output allows for an impressive versatility in how players choose to use him.

Kazuha functions best as the secondary damage dealer or support on any Genshin Impact team. When built right, he can easily function in either role at any given moment. Thus, his weapon of choice should be one that will amplify and expand upon these abilities. Generally, players should focus on building Kazuha’s elemental abilities, attack output, and damage output through the weapon they choose to equip him with.

One of the best weapons from Kazuha is the five-star sword Freedom-Sworn since it will bolster his abilities regardless of the role you choose to have him play on your team. This sword has the “Revolutionary Chorale” ability which increases damage by 10 percent.

It also causes the character who wields this weapon to gain a Sigil of Rebellion upon activating an elemental reaction. Characters can trigger this effect every 0.5 seconds regardless of if they are on the battlefield.

Characters who gather two Sigils of Rebellion will consume them to grant their party the “Millennial Movement: Song of Resistance” effect. This effect increases normal, charged, and plunging attack damage by 16 percent and general attack by 20 percent. After this effect has been activated, new Sigils of Remembrance cannot be gained for 20 seconds.

The five-star Primordial Jade Cutter is another powerful choice for Kazuha. The “Protector’s Virtue” ability of this sword increases the wielder’s health by 20 percent. Additionally, it also grants an Attack bonus that is based on 1.2 percent of the wielder’s Health Points. This means that players who choose to equip Kazuha with this sword should also focus on building his Health Points for the best results possible.

This five-star sword has statistics that help to build upon Kazuha’s “battery” abilities. The “Sky-Piercing Fang” ability increases the wielder’s Critical Rate by four percent.

Upon using an Elemental Burst, the wielder will gain Skypiercing Might. This ability increases movement speed by 10 percent as well as granting Normal and Charged hits a Damage bonus that is equal to 20 percent of Attack. Skypiercing Might will last for 12 seconds.

Players seeking a solid four-star option should try equipping Kazuha with the Sacrificial Sword. The “Composed” ability of this sword grants the wielder a 40 percent chance to end an Elemental Skill’s cooldown following them using it. This ability can occur once every 30 seconds and allows for Kazuha to use his powerful Elemental Skill far more often.

Another great four-star option for Kazuha is Iron Sting. This sword can be created by any Genshin Impact character by gathering the required materials and forging it at one of the blacksmith locations.

The “Infusion Stinger” ability of this sword increases all damage by six percent for six seconds when the wielder deals elemental damage. This effect can stack up to two times and can occur once every one second.

The Artifact set players choose for Kazuha is essential in building him for their desired role. Overall, players should prioritize building up his attack, elemental abilities, and health points through the Artifacts they choose. Mixing and matching between different Artifact sets is also a great choice for maximizing Kazuha’s potential.

Viridescent Venerer is a solid set for Kazuha in both the two-piece and four-piece varieties. The two-piece set grants a 15-percent anemo damage bonus.

This Artifact set is perfect for amplifying Kazuha’s “battery” abilities. The two-piece set grants Kazuha a 20-percent energy recharge bonus. The four-piece set increases elemental burst damage by 25 percent of energy recharge. Up to 75-percent bonus Damage can be added through this set.

Players seeking to build Kazuha’s damage output may find the two-piece or four-piece set of Gladiator’s Finale is a solid choice for them. The two-piece set grants an 18-percent attack increase.

The full four-piece set grants a normal attack damage increase of 35 percent when the character it is equipped to uses a sword, claymore, or polearm. Kazuha is a Sword character, which means he can fully utilize the potential of the Gladiator’s Finale Artifact aet.

Kazuha’s Ascension Materials are fairly easy to gather. Sea Ganoderma can be found all around Inazuman coasts and the various levels of Treasure Hoarder Insignias can be gathered from Treasure Hoarder all across Teyvat.

Ascending character requires players to gather many resources and usually takes quite some time. Luckily, players can break down the materials required over time and across each individual Ascension level.

Visiting the Taishan Mansion on Tuesdays, Fridays, and Sundays is also a must for attaining the required levels of Teachings of Diligence. Players will need to take on Azhdaha in the “Beneath the Dragon-Queller” domain to attain Gilded Scale.

As of July 2022, Kazuha only had one banner run when his special wish banner “Leaves in the Wind” made its debut in the summer of 2021. The Anemo Sword character is thus expected to have a rerun sometime in summer 2022 in keeping with previous patterns in Genshin Impact. He will also likely have many reruns in the distant future beyond that, since Genshin Impact has slowly begun to do character reruns more consistently.