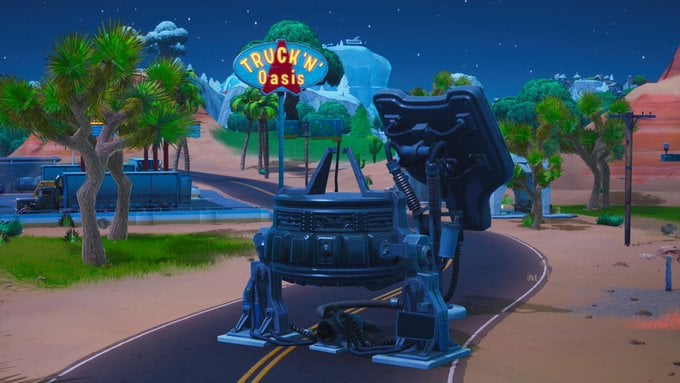 The rift beacon that Fortnite: Battle Royale players saw in the desert last week is now active. Its beam is pointing to the sky and opening a rift above the area, which likely means that the location will somehow change when the next game update drops this week.

Rift beacons are the main lore element of season X so far. Whenever they appear at a certain area, they go active a few days later, create a rift in the sky, and completely change the area they’re in on the next day. Nobody knows who’s building them or what they want to achieve with all of these map changes, but it’s working. Players have Tilted Town, Retail Row, and glitched foraged items thanks to other rift beacons.

It’s safe to assume that the desert beacon will either transform the biome into something else or make it roll back in time and bring back Moisty Mire. There’s enough room in the area to leave players with both Paradise Palms and Moisty Mire in case the latter is returning.

And fans can expect Paradise to be untouched. The beacon is far from the city and there are weekly Battle Pass challenges that require players to visit Paradise to complete them, which means Epic technically can’t remove that area. The company can change the challenge requirement, of course, but it’s never done that in previous seasons.

If Moisty isn’t returning, the desert will likely change into a new area anyway.

Players can expect changes to come when the next Fortnite update drops this week, most likely on Tuesday, as usual. The update will come with that new rift zone around the desert and players will then learn what the next area is that’s set to transform due to a new rift beacon a few days later.