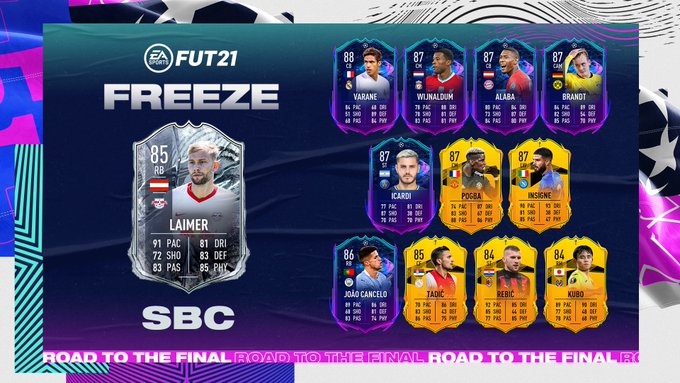 EA Sports added an 85-rated FUT Freeze version of Konrad Laimer from Leipzig to FIFA 21 today. This item will be available through the squad-building challenge (SBC) menu in FIFA 21 Ultimate Team.

This is Laimer’s first special card in FIFA 21 Ultimate Team. EA has changed his position from center defensive midfielder to right back and upgraded all of his stats when you compare this card to his 82-rated gold version, including Physical (+9), Pace (+6), Passing (+5), Shooting (+4), Dribbling (+3), and Defending (+3). You’ll have until Dec. 26 to get this card.

FUT Freeze Laimer costs around 155,350 FUT coins on PlayStation 4 and has a higher price on Xbox One (162,750) and PC (177,650). EA didn’t give Laimer too much of a boost considering the change in position but he’s become a more balanced card with high Pace and lower Shooting skills. You can apply the anchor chemistry style to increase his Defending (+7), Physical (+7), and Pace (+5) even more.

Since Laimer is an Austrian player, you don’t have many options to use with him besides David Alaba from Bayern Munich and Marcel Sabitzer from RB Leipzig. We recommend completing this SBC only if you plan to use a Bundesliga squad in your Ultimate Team. You can link him with other cards, though, such as Team of the Group Stage (TOTGS) Joshua Kimmich from Bayern Munich and Record Breaker Jadon Sancho from Borussia Dortmund.

Here’s the cheapest solution to complete the FUT Freeze Laimer SBC right now, according to FUTBIN, a website that specializes in FIFA content: