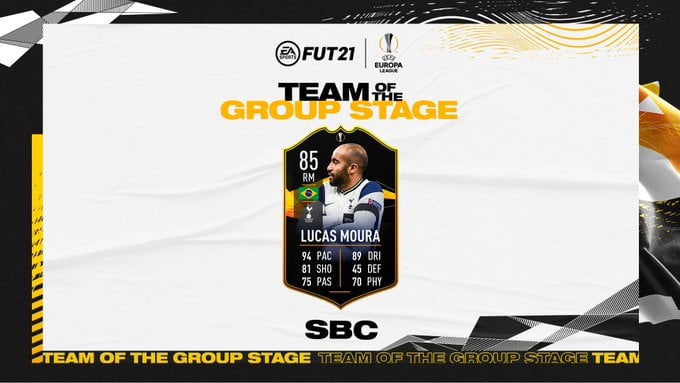 EA Sports added an 85-rated Team of the Group Stage (TOTGS) version of Lucas Moura from Tottenham Hotspur to FIFA 21 today. This item is available through the squad-building challenge (SBC) menu in FIFA 21 Ultimate Team.

This is Lucas Moura’s first special card in FIFA 21 Ultimate Team. But EA hasn’t changed much of Moura’s stats—Physical (+3), Shooting (+3), Passing (+3), Dribbling (+2), and Pace (+2)—when you compared this card to Alessandrini’s 83-rated gold version. While SBC cards tend to highly increase stats, players won’t feel much of a difference with Lucas Moura.

TOTGS Lucas Moura costs around 299,550 FUT coins on PlayStation 4 and has a higher price on Xbox One at 318,850 and PC at 318,100 FUT coins. Although the card seems overpriced for its overall rating, TOTGS Lucas Moura has everything you want out of an attacker in FIFA 21 Ultimate Team: high pace, dribbling, and shooting skils.

If you want to complete the TOGS Lucas Moura SBC, you’ll need to turn in three squads: Spurs, Brazil, and Premier League. When building these teams, the expansive squad you’ll have to submit is one 85-rated team with 65 chemistry minimum, at least one Inform, and one player from the Premier League.

Here’s the cheapest solution to complete the TOTGS Lucas Moura SBC right now, according to FUTBIN, a website that specializes in FIFA content: