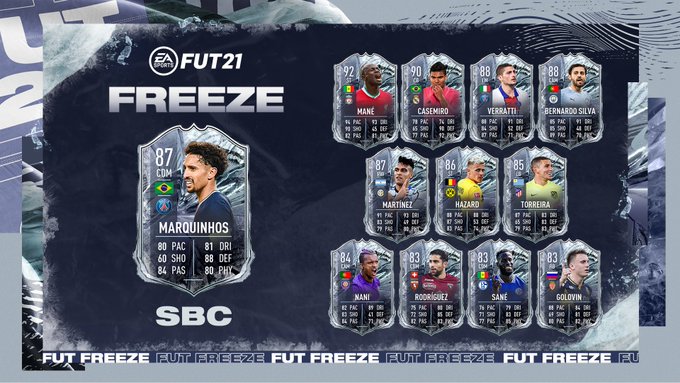 EA Sports added an 87-rated FUT Freeze version of Marquinhos from Paris Saint-Germain to FIFA 21 today. This item is available through the squad-building challenge (SBC) menu in FIFA 21 Ultimate Team.

FUT Freeze Marquinhos costs around 155,200 FUT coins on PlayStation 4 and has a slightly higher price on Xbox One (161,950) and PC (178,550). The SBC price is fair because Marquinhos has great defensive stats. If you want to use him in gameplay, though, we strongly advise you apply the shadow chemistry style, which will fix his Pace.

If you want to complete the FUT Freeze Marquinhos SBC, you’ll need to build an 86-rated squad with 75 chemistry minimum and at least one player from Paris Saint-Germain.

Here’s the cheapest solution to complete the FUT Freeze Marquinhos SBC right now, according to FUTBIN, a website that specializes in FIFA content: