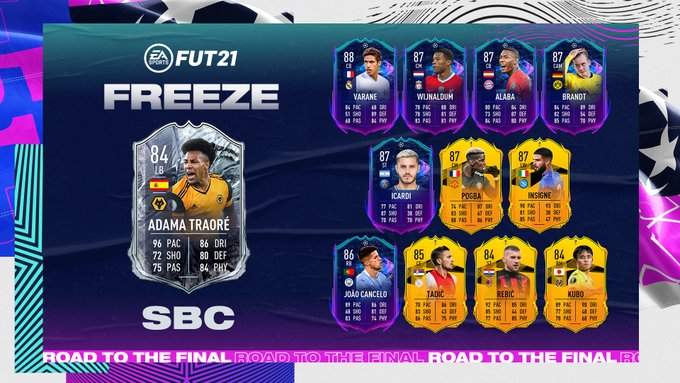 EA Sports added an 84-rated FUT Freeze version of Adama Traoré from Wolverhampton to FIFA 21 on Saturday, Dec. 19. This item is available through the squad-building challenge (SBC) menu in FIFA 21 Ultimate Team.

This is Adama’s first special card in FIFA 21 Ultimate Team. EA has also changed his position from a right-winger to a left-back. EA massively increased his Defending (+42) skill and some of his other stats, including Passing (+7), Shooting (+6), and Physical (+4) when you compare this card to his 85-rated gold version. He also maintained his Pace at 96 and Dribbling at 86. You’ll have until Dec. 26 to get this card.

FUT Freeze Adama costs around 208,750 FUT coins on PlayStation 4, 208,700 on Xbox One, and 236,400 on PC. EA made him a well-rounded card by upgrading his Defending skill. It’s up to you to decide how you want to play with this card, though. If you want to use FUT Freeze Adama as a full back, you should apply the sentinel chemistry style to elevate his defensive and physical skills even more.

You can link FUT Freeze Adama easily because there are dozens of options available in the Premier League or even Spanish players. You can use FUT Freeze Adama alongside defenders such as any version of Virgil van Dijk from Liverpool and Sergio Ramos 90-rated Inform from Real Madrid.

Here’s the cheapest solution to complete the FUT Freeze Adama Traoré SBC right now, according to FUTBIN, a website that specializes in FIFA content: