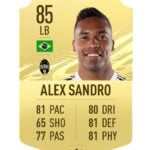 The next FIFA title is less than a month away. FIFA 21 is set to release on Oct. 9 for the current-gen consoles and will become available on PlayStation 5 and the next-gen Xbox consoles during their launch period.

The franchise’s next milestone is packed with a highly anticipated co-op mode for Ultimate Team, more freedom in Career Mode, and more customization options for Pro Clubs. Another aspect that makes each FIFA game unique is the roster changes that also come bundled with rating adjustments. Each year’s title evaluates the players around the globe based on their performances and gives them suitable ratings that would represent their power in FIFA.

Though last year’s cycle had to take a break due to recent global events, the best full-backs were still able to continue contributing to their teams’ success. FIFA didn’t separate full-backs from the rest of the defenders last season, and FIFA 20 featured all the top defenders in a single list. While there is nothing wrong with that, it’s getting more difficult to include center-backs and full-backs in the same category as the sport keeps evolving.

Over the last decade, full-backs have become much more crucial for the offense, just like how important they’re for the defense. The characteristics that defined the best full-backs changed drastically, and some even became more of a threat than most strikers and wingers.

Knowing who are the best full-backs while we’re getting close to FIFA 21’s release will come in handy as you start opening your first packs or start browsing through the shop for the first time. Full-backs can make or break a decent defensive line, and their role on the offensive side of the field can help you overcome the most formidable opponents.

Here are the best full-backs in FIFA 21.

Soccer players tend to get divided into two separate categories: the flashy ones and the stable players. While flashy players can play the game of their life out of nowhere, they can be hard to count on. Knowing what you can expect from a player is a highly valued characteristic by coaches worldwide, and Alex Sandro has been one of the most stable players in Juventus for the past three years.

The Brazillian left-back played 41 matches throughout the 2019-20 season and complimented the one goal he scored with four assists. He put out the exact same performance during the 2018-19 season, which was just after the explosive run he had during the 2017-18 period. The player scored four goals and six assists during the 17-18 season, which was closer to the standard he set when he first walked into Juventus from Porto.

It doesn’t matter how good of a player you are, the Premier League can always eat you alive. When Ricardo Pereira was first brought into Leicester City from Porto, fans were skeptical at first. The Portuguese right-back only had a single season abroad before his move to the Premier League, and one of the most prestigious domestic leagues in the world was about to test his mettle.

Despite a shaky start at first, Pereira adapted to the league quickly and became a centerpiece of Leicester’s defensive composition. Pereira’s great pace turned into a force to be reckoned with for the opposition’s defensive lineup since it only takes him seconds to start pushing alongside his team. The dribbling skills of the Portuguese right-back also allow him to create chances by himself, which netted him a total of four goals throughout the 2019-20 season. He also had three assists and a single yellow card in 33 games, which’s a master class for who’s essentially a defensive player.

His efforts gained him a two-point improvement in his shooting and passing. He also improved in terms of defending and physicality, which boosted his overall rating to 85 from 82.

While foreign players spend a good chunk of the season adapting to the Premier League, this period can be almost nonexistent for the locals. The British right-back moved to Manchester City in the 2017-18 season, and he brought his deadly form from Tottenham Hotspur.

Kicking off his first season in the team with seven assists, Kyle Walker has become one of the essentials of City’s defense. Though the team wasn’t able to show its true potential in the global arena like last year, the soccer it played still received the applause it deserved from the fans.

Walker contributed to his team with a goal and six assists during the 2019-20 season. The solid performance Walker put out buffed his pacing and defending by a single point, increasing his overall rating by one to 85 in the process.

The 2019-20 season has been a roller coaster of emotions for Barcelona. The Spanish giant suffered multiple heartbreaks, both domestically and internationally. The club was knocked out of the league cup in the quarter-finals and endured a crushing defeat in the Champions League. Once all of this combined with losing the league title to the eternal rivals Real Madrid, the season was nothing but a disappointment for both Barcelona fans and the footballers.

This doesn’t mean they showed subpar performance, however. Though it was possible to point out some minor errors, Barcelona still put out a decent performance throughout the season, and it owes much of it to the stability it has achieved in its defensive line. Being a part of the club since the 2012-13 season, Jordi Alba continues to be a reliable asset for Barcelona.

Alba played a total of 36 games throughout the last season and scored two goals. The nine assists he had was nothing close to the 17 of the 2018-19 season, but no one can deny that it’s still an impressive performance for the 31-year-old. His stable performance allowed him to retain most of his stats with a single point difference here and there, which reduced his overall rating to 86 from 87.

Real Madrid owes a good chunk of its success to the successful youth development programs it has. The club’s ability to raise new talent consistently helped it stay on the competition for many years, even if it lost stars like Cristiano Ronaldo.

Daniel Carvajal was a part of 42 games throughout the 2019-20 season and contributed with eight assists. The Spanish right-back also has a single goal to his name like the 18-19 season. Though Real Madrid wasn’t able to advance through the later stages of the Champions League, it was able to beat the long time rivals, Barcelona, to the league championship with a five-point difference.

Carvajal’s solid showing netted him a seven-point increase in his shooting, and his overall rank increased to 86 from 85 in FIFA 21.

Liverpool has become the team to beat in recent years. The manager, Jürgen Klopp, gathered a great group of talented players, and the team can be described as a well-oiled machine that doesn’t look like it’s going to stop. The success Liverpool achieved over the last two years, winning the Premier League and lifting the Champions League trophy, wasn’t entirely dependent on its attacking force.

Liverpool’s tough defensive line is also responsible for its success, and Andrew Robertson is a vital part of that. The Scottish left-back played a total of 49 games this season and scored three goals alongside 12 assists. Though Liverpool was eliminated at the Champions League’s earlier stages, the team’s dominating domestic performance was still enough for the fans to call it a good season.

Robertson’s phenomenal performance banked him a three-point increase in his passing and single-point buffs for his defending and physicality.

Coming out of Liverpool’s youth squad, Trent Alexander-Arnold has been considered a wunderkind ever since his first showings. Alexander-Arnold and Robertson have become such a deadly RB-LB duo that their contribution to the score makes other teams’ midfielders jealous.

Alexander-Arnold played 49 games in the 2019-20 season and contributed to 15 goals via assists. He also scored four goals to his name, totaling his contribution at 19. It’s an insane number for a defender, and he’s only 21 years old.

His out-of-this-world performance earned him a four-point increase in his shooting, five points for his passing, and two for dribbling and defending. His overall rating increased by four, and he’s currently ranked as the best full-back in FIFA 21.