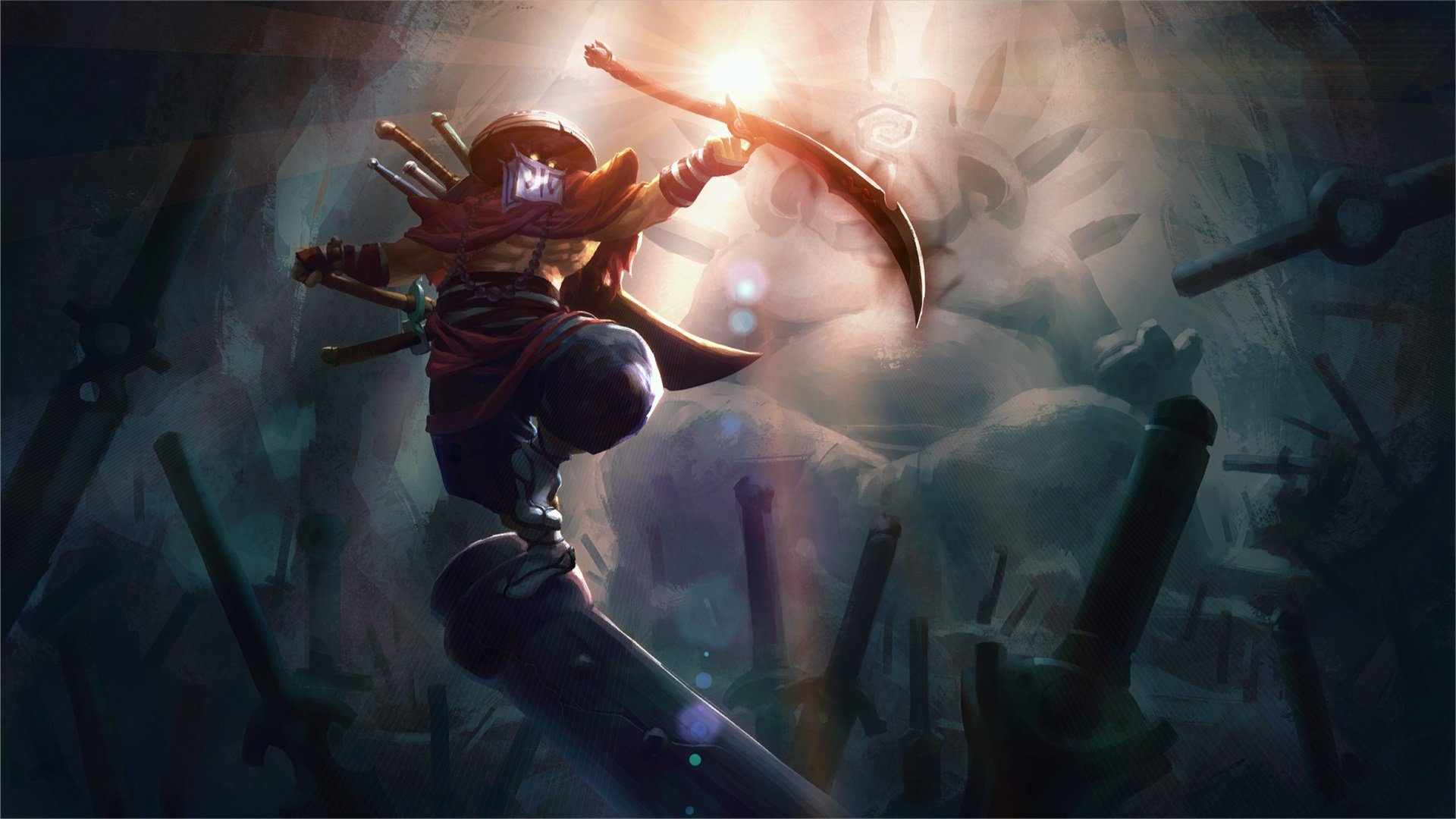 Yurnero, the Juggernaut is that one carry hero that has never really been out of the metagame. That’s thanks in no small part to his versatile kit and his natural ability to gain instant magic immunity. He’s also well-balanced across the board in terms of early game power and late game scaling, with both Blade Fury and Omnislash helping him dish out damage leading up to the 40 or so minute mark.

His low skill floor and demand on mechanical skill means that anyone, from newbie to veteran, can pick him up and still do well with him. All Juggernaut really needs in the laning phase is last hits, and the occasional kill or two when allied support heroes are around for ganks. Blade Fury’s built-in instant magic immunity also makes the laning phase very forgiving on Juggernaut because he can shrug off incoming spells—especially those with slow cast times or highly telegraphed animations.

He does, however, live and die by his jack-of-all-trades design. Although Juggernaut is average in all fields and doesn’t have any immediately recognizable weaknesses, other than silences before Manta Style, he also doesn’t really excel at anything either. His damage output is only respectable at best in deep late game situations, and thus, he’s typically outclassed in terms of carrying by picks such as Medusa, Spectre, and Sven.

But overall, Juggernaut is still a great pick for almost anyone. He fits into most drafts as a carry that can fight early on, and still scale well enough to deal right click DPS in the late game. If you’re looking for a versatile, balanced hero, look no further than the Masked One himself.

Just your average swordsman, kind of

In terms of base stats, Juggernaut is well below average, particularly in his strength and intelligence. His base HP and mana will leave players wanting more—especially for the latter as Juggernaut’s abilities all cost quite a bit of mana. Blade Fury does have a negatively scaling mana cost, but its asking price at level one is rather steep at 120 mana per cast. Healing Ward is fixed at 140 mana, which is the average cost of a 250+ damage nuke elsewhere. Omnislash costs 200 mana to start with, and costs a whopping 350 at max level.

His low mana pool also ties directly into his lack of flash farming tools, making him very reliant on Battle Fury when the draft and gameplan revolves around going for the late game. After all, spamming Blade Fury on creep waves isn’t exactly the best use of the skill—especially against smart opponents who notice it and capitalize accordingly by ganking you while the ability is on cooldown.

Knowing all this, make sure to be wary of his small resource pools, and to keep an eye on mana consumption through the early and mid game.

Way of the Masked One

Juggernaut’s skill build is very straightforward, and will hardly change from game to game. Blade Fury is maxed out first, in order to get its damage output up as quickly as possible while also reducing its mana cost. Value points in Healing Ward and Blade Dance contribute to both survival and right click damage in the early game, with the latter being especially cost-effective thanks to its solid starting proc chance of 20 percent.

Blade Dance, however, should be left at level one, as its scaling isn’t exactly the greatest—it only gives an additional five percent to the proc chance per level. Maxing out Healing Ward first is far more important, as it helps your teammates during full engagements as much as it helps you.

Lastly, Omnislash should be taken at every opportunity because it happens to have the best scaling across all of Juggernaut’s skills.

Forged in the Isle of Masks

Juggernaut likes items that allow him to sprint at his enemies in order to set up Blade Fury or Omnislash. Phase Boots will be the better choice over Power Treads in most cases, since the boost in both movement speed and attack damage helps him secure kills in the early and mid game.

As mentioned earlier in this guide, Battle Fury will be your first core item. Its components help you shrug off harassment in the laning phase, while the full item itself greatly accelerates your farm. If your draft is favored in the late game, delaying your ability to take fights by purchasing a Battle Fury is usually worth it.

The other, more mid game-focused route, involves buying Sange and Yasha instead. Sange and Yasha allows you to fight earlier and more often, thanks to its immediate boost in movement speed, HP, and valuable passive ability. Take note, however, that choosing this route instead of Battle Fury means sacrificing late game power in favor of a faster, tempo-based style of play. Make sure your draft is centered around such a strategy before buying Sange and Yasha.

Either way, a Yasha-based item is essential for Juggernaut. He simply lacks attack speed in the mid game without it, and with how Mask of Madness works now it’s hardly a good substitute anymore. For the Battle Fury route, a Yasha into Manta Style works best. Not only does Manta increase your DPS and allow you to confuse your opponents with illusions, but it solves one of Juggernaut’s biggest weaknesses: Silence effects. Remember, Manta’s active ability purges most debuffs, including silences, making it one of the best items in the game for Juggernaut in particular.

Fortunately, you can still build a Manta even after going for the mid game-focused build. Sange and Yasha can be disassembled after its timing passes, allowing you to sell the Sange (unless you need Heaven’s Halberd) and keep the Yasha for later. Eventually, you’ll want to get a Basher, since it allows you to lock targets in place and prevent them from fighting back. Black King Bar heroes will also kneel under the might of Abyssal Blade, Basher’s natural upgrade.

Butterfly is a solid late game choice too because its evasion and agility bonus allow you to go toe-to-toe with opposing hard carries. Of course, don’t be afraid to buy a BKB of your own if the situation calls for it—but otherwise you’ll want to avoid it altogether since it’s a waste of inventory space. You might also want to consider getting a Blink Dagger, in order to quickly get into range for Omnislash and to give yourself an instant escape mechanism.

Juggernaut’s gameplan from the laning phase to the late game is not complicated at all, and follows those of similarly-designed heroes. Focus on efficient last hitting and farming during the laning phase, while trying your best not to die in the lane. Blade Fury will be your main tool for both offensive and defensive purposes in the early goings, since it deals damage and protects you from spells at the same time.

If you have supports that are good at laning, make sure to take advantage of your great early game damage output with Blade Fury. Heroes like Crystal Maiden, Shadow Shaman, Nyx Assassin, Venomancer, and Lion are great partners for this.

Going into the mid game, you should ideally have Phase Boots and Battle Fury up before the 20-minute mark. Keep farming with Battle Fury’s cleave mechanic, then you may opt to fight after purchasing Yasha. If you decide to forego Battle Fury altogether, try to fight as often as possible with Sange and Yasha in tow, in order to make the most out of the timing window. Remember, the Sange and Yasha build falls off after the mid game—so it’s imperative that you strike with it as soon as possible.

The late game is very straightforward: Carry your team to victory with your physical DPS and ability to shrug off all spells that don’t pierce magic immunity. Omnislash makes you completely invulnerable during its animation, so don’t be afraid to use it at the start of a teamfight.

Although Juggernaut has received the short end of the stick over the last handful of patches, he’s still one of the most stable picks at the hard carry position. Balance-wise, he’s in a pretty good place right now, and he rewards teams that build their draft around his strong laning phase and very respectable late game carry potential.

Most importantly, Juggernaut is very easy to pick up, and the potential for making game-ending mistakes with him is rather small. Reliability is something that those who are truly competitive can appreciate, and Juggernaut certainly has that in spades.

Often it’s just a matter of shoring up his small weaknesses, which is a consequence of his versatility and flexibility. Make the right choices with Juggernaut, and the Masked One will serve you well.