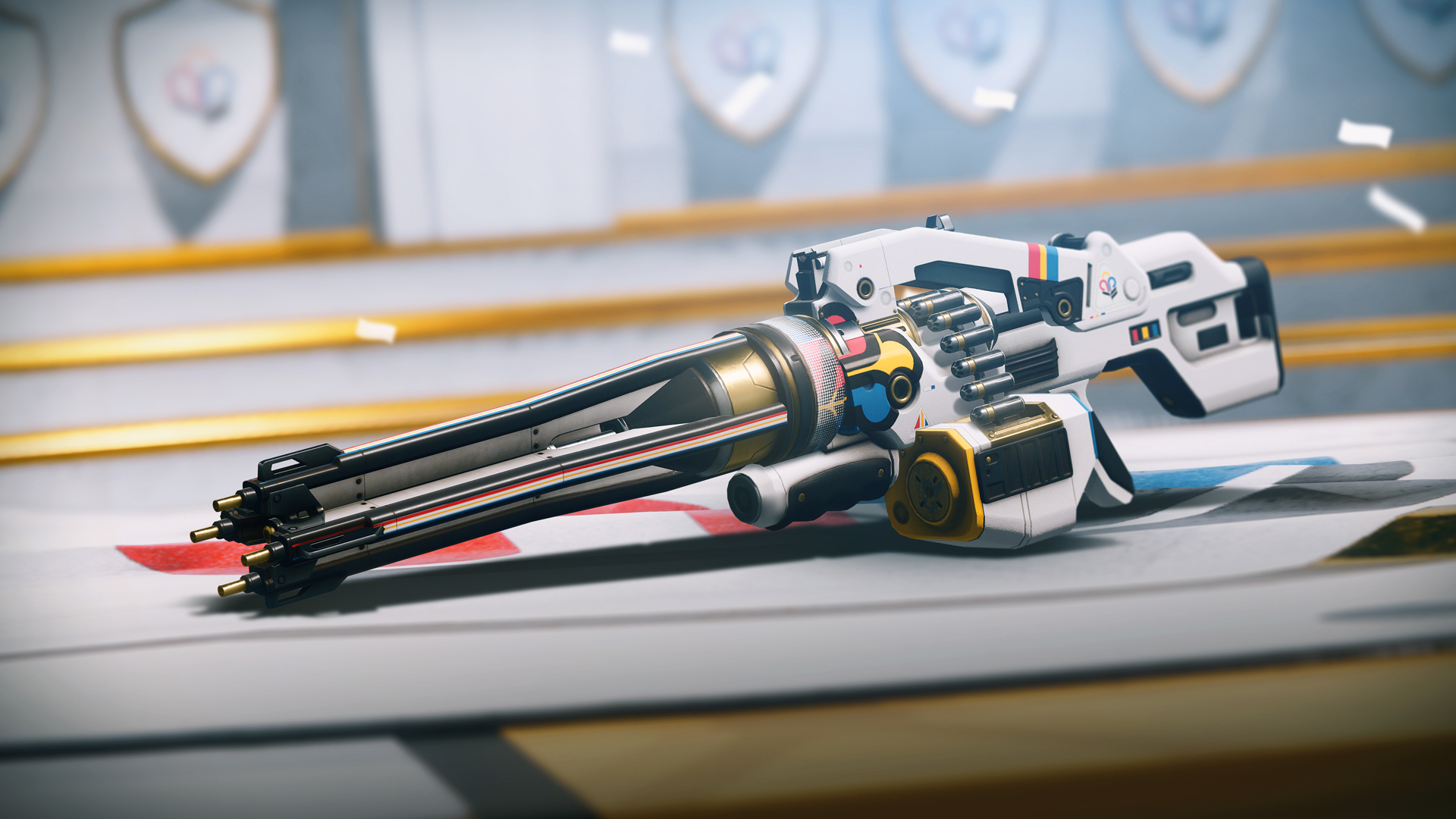 The Heir Apparent Exotic machine gun is a Guardian Games special in Destiny 2. Both the weapon and its catalyst are exclusively available through the Guardian Games event, a limited-time competition of the classes hosted by Eva Levante in the Tower. While Heir Apparent is strong on its own, its catalyst is what has made the Exotic LMG so notorious in the Crucible since it received a buff last year.

The catalyst for Heir Apparent enhances one of its unique traits, Armor of the Colossus. If Heir Apparent is spun up while the user is at full health, Armor of the Colossus will wrap the Guardian in a powerful Arc shield to enhance their defenses at the expense of some mobility. The catalyst increases the durability of this shield, making it nearly impossible to break without weaponry that has a matching Arc energy type. If it is successfully depleted despite this, the catalyst also partially refills the 200-round magazine when the shield is destroyed for a bit of bonus clutch factor.

Heir Apparent has a pretty straightforward path to acquisition during the Guardian Games, acquired through the Top of Class quest. Once you have Heir Apparent, you can hunt for its catalyst as well. But the catalyst requires a little more dedication to secure.

Related: How to get Heir Apparent in Destiny 2

Both the Heir Apparent and its catalyst will only be available while the Guardian Games event is live in Destiny 2, so players that are missing either should make sure to get these quests done before it goes away. Guardian Games in 2022 will be live between May 3 and May 24, wrapping up Season of the Risen.

How to complete the Competitive Catalyst quest

The Competitive Catalyst quest is a potential random drop from turning in Guardian Games Medallions at the Podium in the Tower. It sounds like a daunting prospect, but the drop chance is particularly generous when turning in Gold and Platinum Medallions. Knocking out Eva Levante’s stock of Contender Cards will provide Guardians with a consistent stream of high-tier Medallions if you’re struggling with getting this quest to drop quickly. Once you have acquired the Competitive Catalyst quest, you will have three steps to complete to get the Heir Apparent Catalyst.

Each Medallion is valued as follows:

Competitive Spirit is a currency unique to this quest, and you’ll need 90 of it to complete this final step. Competitive Spirit is obtained via Machine Gun kills in the Daily Focus playlist. It cannot be earned through any other playlist other than the one currently spotlighted by the Daily Focus during the Guardian Games, so make sure you know which playlist is currently in rotation to avoid a lot of wasted time. Waiting for the best day can be the quickest way of tackling this since the step is significantly harder while the Crucible is the featured Daily Focus playlist.

Related: What is the Daily Focus playlist in Destiny 2 Guardian Games?

Collect the 90 Competitive Spirit needed from defeated enemies and you will have earned the Heir Apparent Catalyst. You will need to get kills with Heir Apparent to slot the catalyst into the Exotic machine gun, but these kills can be obtained whenever and aren’t tied down by any Guardian Games-related time restrictions.