The North Americans got revenge from their loss at BLAST Pro Series Miami in April. 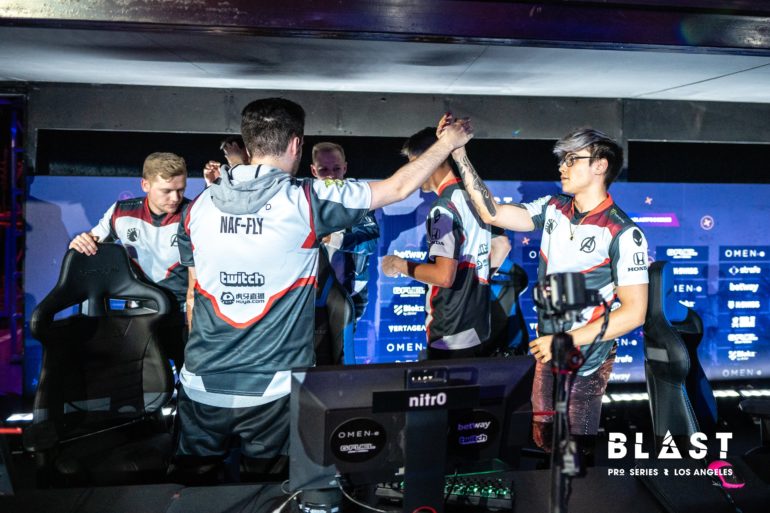 Team Liquid are the champions of BLAST Pro Series Los Angeles, claiming their fifth major CS:GO tournament in a row.

The North Americans played nine maps throughout the event and won all of them. Liquid didn’t slow down whatsoever against FaZe Clan, who defeated them on American soil at BLAST Pro Series Miami in April.

The grand finals started out on Nuke, which was picked by FaZe. But Liquid dominated the game in the first half behind Jake “Stewie2K” Yip, who kept his promise and finished the first half with 21 kills and only six deaths. The North Americans showed great defense and built an 11-4 advantage.

It seemed like the map was over after Russel “Twistzz” Van Dulken got a one-vs-two clutch in the second pistol, but Liquid couldn’t secure the following round against FaZe’s force buy and ended up losing five straight times. Although the North Americans were losing, they kept FaZe’s economy low, which is a crucial factor on Nuke, where the CTs need to have grenades to counter fast plays. Liquid were up 15-9 when FaZe came alive with a one-vs-two clutch from Ladislav “GuardiaN” Kovács. Liquid managed to close out the game 16-13 after Jonathan “EliGE” Jablonowski won a one-vs-three clutch. Stewie2K finished with 30 kills.

The series proceeded to Inferno, a frequent map for grand finals and one of Liquid’s playgrounds. Despite winning the pistol round, FaZe couldn’t hold Liquid’s force buy and Twistzz had a triple kill with the AK-47. Liquid took advantage of that round to pile on some rounds off the back of Twistzz’s performance, who was even better than Stewie2K on Nuke, finishing the half with 25 kills as Liquid went up 9-6.

Keith “NAF” Markovic crushed FaZe’s dreams after he got three kills through the smoke and added two more kills on the retake for the ace in the second pistol round. The North Americans got all the momentum they could and didn’t drop a single round after NAF’s ace. Twistzz top fragged with 28 kills as Liquid defeated FaZe 16-6 to win BLAST Pro Series Los Angeles.

FaZe won’t be entirely happy with their second-place finish, but the team played better at BLAST Pro Series Los Angeles than they did at ESL One Cologne last week, where they were eliminated early in the group stage, and ESL Pro League season nine finals in June, where they fell short of the quarterfinals after surprisingly losing to G2.

The international squad at least reached the grand finals this weekend and weren’t humiliated by Liquid. This result should raise their morale a little before the StarLadder Berlin Major in August. There’s a rumor that FaZe want to replace Filip “NEO” Kubski after the Major with Marcelo “coldzera” David, who just got benched by MIBR.

As for Liquid, they’ve shown one more time why they’re the best team in the world. After a rough year in 2018, reaching grand finals and losing to Astralis every single time, Liquid are ready to have their own era, which we can say is starting to happen after Liquid’s fifth major championship and grabbing the Intel Grand Slam last week in such a short time. They earned $125,000 for winning BLAST Pro Series Los Angeles.

Everybody on Liquid contributed to their amazing run this weekend. Stewie2K and Twistzz had their moments, but NAF truly deserved the MVP trophy. He played out of his mind during the group stage and surely made the best individual play of the tournament with the ace on Inferno.

The Canadian played said that his ace was sweet during the post-match interview. “It was obviously my best moment of the tournament,” NAF said. “We have the players to turn every situation.”

Liquid’s next competition will be at IEM Chicago, which starts on July 18. The $250,000 tournament will feature teams like Vitality, ENCE, G2, and MIBR.