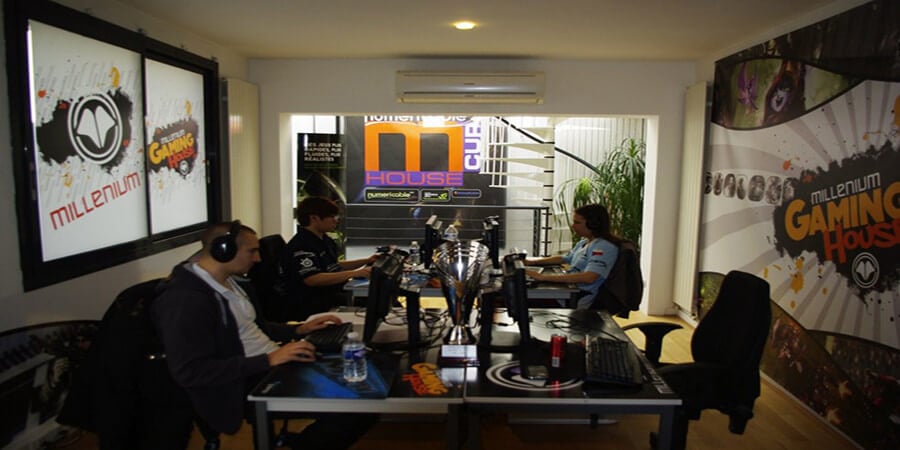 Competitive video games are becoming more and more like normal sports. The culture is no longer all about online multiplayer, with local area network (LAN) events taking place almost every weekend. ESports teams have turned into professional organizations with an owner, player managers, coaches, spokespersons, and players across multiple eSports titles. Several organizations have even purchased their own “team houses” for the players to live in. Large investments like these show that eSports owners are expecting to earn large sums of money from their organizations in the future, and some are already doing so now.

A team house allows organization owners to put all of their resources in one place so that they are more easily accessible. The players benefit from increased contact with their teammates and an environment that keeps their mind on the game. The better relationship with teammates they gain as a result often translates to increased teamwork in-game, an obvious upside for an organization that is serious about eSports.

“The Bearded One” (@Tomahawk_Bz), General Manager for Below Zero, says that he expects more organizations to purchase team houses in the future. The players on Below Zero are currently living in one themselves. “The main benefit for the players is to focus on playing and nothing else. The main benefit the team house provides for our org is to grow with our players,” he stated.

One of the players for Below Zero, Zack Carter (@Godlike_Bz), shares the same sentiments, “The team house helps in that we are able to build chemistry and strengthen our relationship with our teammates outside of the game, which actually helps a lot more than one might believe. Gaming has a lot more to do with real life friendships than most might think.”

There are many upsides, but there is at least one downside that competitive teams may experience after living in a team house: the difference in online versus LAN competition. It can be argued that if all players live together and use the same high-speed internet, they get used to the feel of online play and don’t transition well to LAN play. Anyone who is accustomed to competitive video games knows that connection can sometimes play a major role, especially in FPS titles such as Call of Duty. When going from online to LAN, the change in connection can potentially throw off a player’s aim. Is this a major concern?

When asked about the effect of a team house on LAN play, Zack stated, “I don’t believe LAN will be a problem for my team coming out of a team house, we’ve always been better on LAN in the first place and we have enough experience for this small change to not affect us as a whole.”

In professional Call of Duty, several other organizations have purchased their own team houses. Optic Gaming, owned by Hecz, has had a team house near Chicago for the past two years. Though Optic has two professional Call of Duty teams, only a handful of the players actually live there. For the Optic Gaming squad consisting of Formal, Crimsix, Scumpi, and Karma, only Crimsix is currently living at the house. The Optic Nation squad only has one member there, MBoze. The benefits of a team house are not fully realized in this case as a result. Other tenants include Nadeshot, BigTymer, and Flamesword, all valuable members of the Optic organization, but without all members of the competitive teams living in one place, the sense of comradery and increased teamwork learned outside of the game are not possible.

Other organizations with team houses include Team EnVyUs and TCM Gaming. TCM Gaming recently moved to the United States from the UK before the Call of Duty Championship. They bought out a league spot from Aware Gaming and are now participating in Season 2 of the MLG Pro League. The move allowed them to prepare for CoD Champs amongst the best Call of Duty players in the world, though it was no help, as they were eliminated during the group stages. TCM is currently holding their own in the Pro League and made it to the semifinals of the Gfinity Spring Masters I, however, so it seems that the investment was worthwhile after all. Down the line, TCM surely expects to see even greater performances from their roster as a return from the team house investment.

The Team House era of eSports is upon us and is only the first glimpse at how the scene is evolving, but what’s next? There have been hints of more dedicated arenas from which eSports events will be broadcasted. There are already several of these in operation, including the Gfinity Arena in London, England. The Gfinity Arena was built at the location of an old cinema, so it already has the necessary components for a successful entertainment center. It will be hosting eSports tournaments every weekend throughout the summer. Major League Gaming (MLG) took their first step down the path as well by opening up MLG.tv Arena, which is nothing more than a remodeled business park suite, though they have used it thus far to host the playoffs for their Call of Duty, CS:GO, and DOTA Pro Leagues. MLG has hinted at future plans, which include more dedicated arenas around the United States from which Pro League matches will be held. If this eventually occurs, team houses are sure to sprout up in close proximity, essentially turning the arena into a team’s home turf. Imagine that!