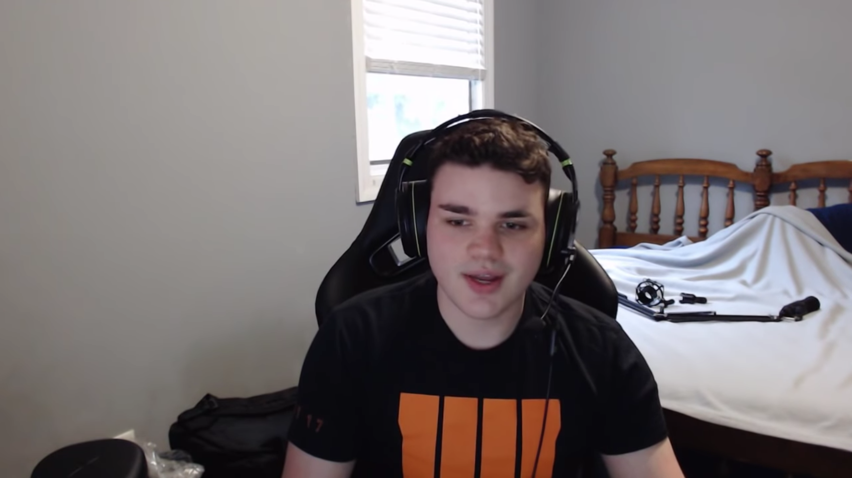 May has been a great month so far for Anthony “Methodz” Zinni.

After joining OpTic Gaming on May 6, Methodz was given the chance to play the upcoming Call of Duty game at the Black Ops 4 reveal event earlier this week. And the newest player for the Green Wall took the time to answer some questions about Black Ops 4 on YouTube.

One of the most highly-debated topics so far for Black Ops 4 is the new health system. Players will now have to manually heal themselves as opposed to the traditional automatic health regeneration in previous Call of Duty titles. But Methodz thinks that some people might be overreacting to the new health system.

“I think people are definitely overthinking how drastic it’s gonna be,” Methodz said. “It’s essentially just like auto-regen, but you actually have to trigger it, and I think it’s gonna add for some cool plays. It’s a really fast process, it’s not like other games where you’re sitting there bandaging up—you pretty much just stab yourself and your health starts going up.”

Another concept that some viewers noticed during the game’s reveal was how long it took to kill someone in Black Ops 4. But for Methodz, the time-to-kill simply made him reminisce a bit about an older Call of Duty title.

“The time-to-kill is a little bit longer—I noticed it when I had a submachine gun at range vs. an assault rifle player. But overall, the time-to-kill felt good. The game felt like a Treyarch game. If I could describe it, I’d say it felt like Black Ops 2.5.”

Even though Methodz liked how the game felt, he did mention that it seemed extremely fast. In particular, the 20-year-old slayer thought that the slide feature was “pretty much the Black Ops III slide, but it seems like it goes a little further and faster.” He thinks sliding might need a “tiny tweak” before the game is launched.

Another feature that Black Ops III players should remember is the specialist characters. Specialists will be returning in Black Ops 4 with a bunch of new, unique abilities and weapons—and it sounded like Methodz had a lot of fun playing with Ruin in particular.

“My favorite was the Grapple Gun guy where you can grapple to a certain area pretty quickly and then ground-pound with the Gravity Spikes,” Methodz said. “Specialists are specialists, man—they’re obviously powerful, but the thing is now they have that special-issue gear. They’re adding a lot of new, fun features that I think are gonna be really entertaining to be a part of.”

In addition to new specialist characters and abilities, a game mode called Control was available for early access testing at the Black Ops 4 reveal. In this game mode, each team gets 25 lives per round, and the first squad to three round wins is victorious. But there are also two capture points—so you can win by either killing the other team 25 times, or capturing both points if you’re on offense (the defensive team can win if they get 25 kills without losing control of both zones).

“It was honestly pretty awesome,” Methodz said. “I think it would need a few minor tweaks to be in competitive, but I think it’s definitely something interesting and new.”

But even though Treyarch showed off a new game mode and different specialists, one of the most highly-anticipated features in Black Ops 4 is the Blackout battle royale mode. Blackout wasn’t available for testing at the reveal event, but it’s still one of the features Methodz is most excited about without even seeing it yet.

“I think this is gonna add a great aspect to where you can literally just hop on the game whenever you want and have fun,” Methodz said. “I love the fact that they’re gonna make the one big map include a bunch of small maps from previous games. I can just picture ‘where we dropping, boys?’ and it’s like Raid or Summit, or something cool like that.”

On top of the highly-anticipated battle royale mode, Methodz is looking forward to the return of League Play. He believes that the competitive playlist will be “way better than the Black Ops 2 one”—which is high praise because Methodz thinks that it was “the best we’ve had so far.”

Another new feature that he thinks is great for Call of Duty is predictive recoil—which is similar to the recoil system seen in Counter-Strike: Global Offensive. Methodz thinks that this will help separate the professional community from the amateurs because he expects that pros will get the hang of the recoil patterns and outmatch opponents using the same gun.

“Predictive recoil is very important because it’s gonna add an actual skill gap,” Methodz said. “Some players will probably be better with certain guns that they master the recoil for compared to other players. I think it’s gonna add something really good for Call of Duty as a whole, not even just competitive, and I’m excited for it.”

Although he’s excited about the addition of predictive recoil, Methodz doesn’t feel the same way about the minimap changes in Black Ops 4. Treyarch is introducing a Fog of War element to the minimap, which will only reveal enemies around or near you and your teammates. And Methodz doesn’t seem too thrilled about this new feature.

“If I’m being completely honest, I’m not sure how I feel about it yet for competitive,” Methodz said. “In a sense, it basically adds situational awareness for players who didn’t have great situational awareness. I really don’t know how it works 100 percent—I only played like eight games. I still gotta play with it more, but it’s something new and I’m not against something new.”

But the Fog of War is just one small feature that Methodz might not like. He still thinks that “we’re in for a good year” during Black Ops 4, and he really liked the feel of the game.

“It’s a Treyarch game, and it feels like a boots game,” Methodz said. “Like I said, it’s pretty quick, but Treyarch knows how to make Call of Duty feel good.”

Although most Call of Duty fans are excited about the launch of Black Ops 4 on Oct. 12, Methodz still has plenty of WWII left to play this year. He’ll make his official OpTic Gaming debut at Stage Two of the CWL Pro League on May 29.