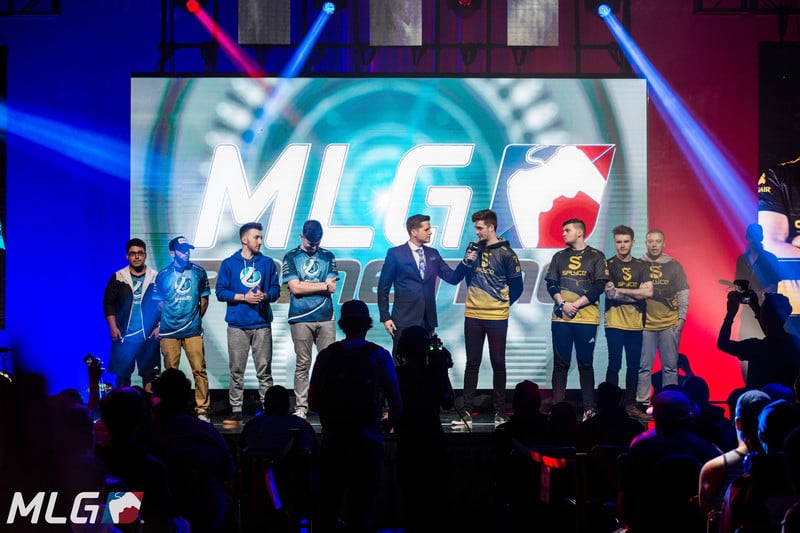 The Call of Duty: Infinite Warfare season is quickly coming to an end, but we still have two of the biggest tournaments of the year remaining—and one of them starts tomorrow.

After four weeks of Call of Duty World League action in the Global Pro League, the field of 16 teams has been cut in half. The top eight teams in the world remain to fight for $500,000 at the MLG Arena in Columbus, Ohio during this weekend’s CWL Global Pro League Stage Two Playoffs.

Following the final match last Sunday in Group Green, the CWL revealed the first round matchups for the Stage Two Playoffs.

This weekend’s tournament will feature a double-elimination bracket, where teams will face off in best-of-five series until a champion is crowned. The last team standing will leave Columbus with the first-place prize of $212,500—and will be the top contender heading into next month’s $1.5 million Call of Duty World League Championship.

Luminosity should be considered the top team entering the Stage Two Playoffs. Octane and crew translated the momentum from their first-place finish at the CWL Anaheim Open in June into a 5-1 performance in Group Red of the CWL GPL. But this team has a difficult first round matchup in Splyce—the team Luminosity has faced in the past two grand finals.

Fnatic (No. 2 seed from Group Red)

This European squad shockingly took down Evil Geniuses to steal the second spot in Group Red. Even though they played well in their week of the CWL GPL, Fnatic will have to square off against OpTic Gaming in the opening round of the playoffs. This will be a difficult matchup for the Europeans, but as we’ve seen in the past, anything can happen in Infinite Warfare.

Although they didn’t get off to the best start in their week of the CWL GPL, FaZe’s new lineup still prevailed and earned the top seed in Group Blue with a 4-2 record. With the addition of Gunless, this team has a lot more pressure and submachine gun slaying power, which could be dangerous on some of the smaller maps in Infinite Warfare. FaZe will play Team EnVyUs in the opening round of the playoffs—and with the boys in blue playing so well recently, this should be a very close match.

Heading into the final match on Saturday in Group Blue, Enigma6 was outside of the playoff hunt. But the squad reverse swept FaZe and used an impressive performance the following day to clutch up and secure the second seed in their group with a 4-2 record. E6 is a very aggressive team that exerts a lot of pressure on the map. Unfortunately for them, so is eUnited—and that’s who they’ll be playing in the first round of the playoffs.

eUnited (No. 1 seed from Group Yellow)

Since Clayster joined this team, eUnited has looked even scarier than they did when they won the CWL Atlanta Open in February. This team dominated Group Yellow with a 5-1 record, and Clayster played out of his mind. The Call of Duty veteran is motivated more than ever since he was traded from FaZe, and Clayster will look to continue his early success with eUnited at the Stage Two Playoffs—starting with their match against E6.

Splyce (No. 2 seed from Group Yellow)

The CWL Stage One champions didn’t get off to the best start in Stage Two. Splyce went 3-3 in Group Yellow, but still walked away with the second seed after defeating Red Reserve twice. Many fans are starting to doubt these Europeans, and they have a tough task ahead of them when they rematch against Luminosity in the first round of the playoffs.

Did anyone ever really doubt the Green Wall? OpTic went 6-0 in Group Green—making them the only team to go undefeated in both stages of the CWL GPL. This team played very well across all game modes last weekend, and the Green Wall should easily take care of business in the first round of the playoffs against Fnatic.

The boys in blue were one of the more pleasant surprises in Group Green, producing a 4-2 record—with both losses only coming against OpTic. EnVyUs played exceptionally well in Hardpoint, and that will need to be one of their keys to success in the playoffs. JKap and crew will face the new FaZe lineup in the opening round of the playoffs, which should be one of the most exciting matches on Friday.

Fans can watch all of the matches in the CWL Stage Two Playoffs on multiple streaming platforms, including MLG.tv, Twitch, Facebook, YouTube, and in-game on Infinite Warfare for PlayStation 4. MLG.tv’s Enhanced Viewer Experience provides an interactive way to spectate these matches, with real-time statistics, the scorestreak trivia game in the stream’s chat, and Featured POV Streams of individual players.

You can find the times for all of the first-round matches that have already been scheduled below, as well as the game modes and maps being played in each playoff series.

This weekend is sure to be one of the most exciting weekends of Infinite Warfare yet. With so much on the line right before the biggest tournament of the year, the CWL Stage Two Playoffs will definitely be a great preview for what’s to come at the 2017 Call of Duty World League Championship in August. And all the playoff action kicks off tomorrow afternoon at 4pm ET.