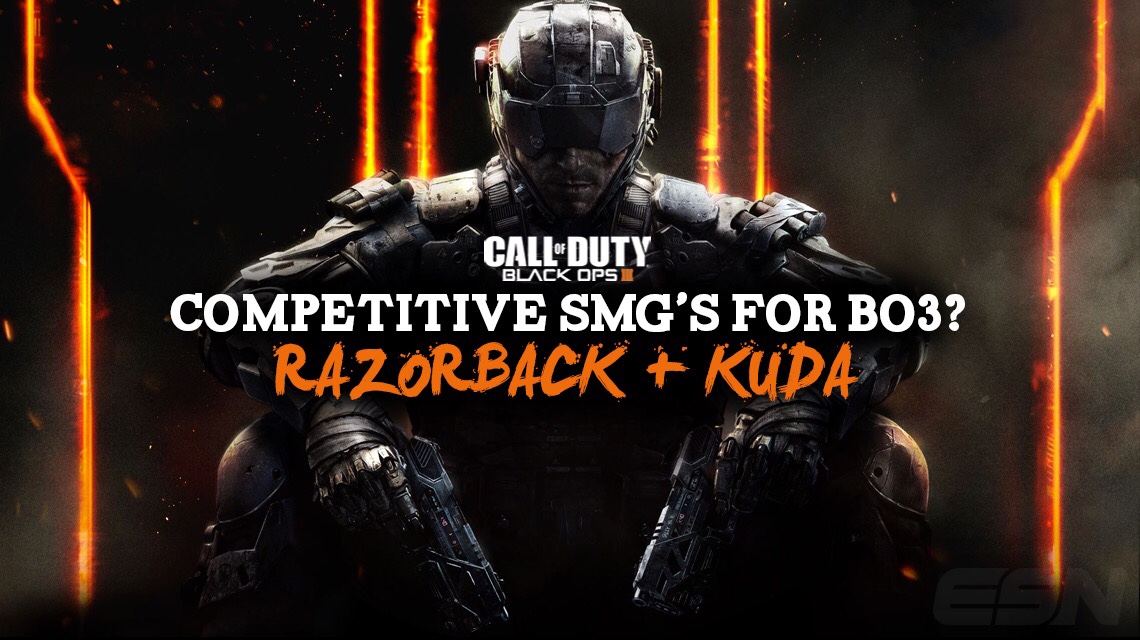 With the release of every Call of Duty title in the franchise, fans of the eSports side of the game are always wondering what the most dominant competitive guns are going to be. So far, the trend will continue in Call of Duty®: Black Ops III, with everyone already talking about what will be the best submachine gun in the next installment in the Call of Duty franchise.

Honestly, the answer to this question might come as a surprise to some of you. Everyone is probably expecting me to answer with “the Razorback is hands-down the best SMG in the game.” But I am not going to say that. In my eyes, I think that the Beta has proven that both the Razorback and Kuda will be able to co-exist in competitive gameplay for Black Ops III. Before everyone comments with “the Razorback is the most overpowered gun in the game, why would anyone use the Kuda?” let me explain. I think that the Razorback is the strongest SMG in Black Ops III, but I feel that the Kuda is the most well-balanced gun in the game. https://www.youtube.com/watch?v=tS5gWH9ftNk The Kuda is extremely effective at close range, even more so than the Razorback in my opinion. At medium range, it might be a tie between the two guns, but I would probably still give the advantage to the Kuda simply because it has less recoil than the Razorback and is easier to control your gunfire. https://www.youtube.com/watch?v=ueUIruwYRnI However, the Razorback can be an absolute “melt-machine” that just kills opponents almost instantly and racks up large kill feeds, making it easier to get three or four kills with only one magazine of ammunition, as seen above. From a statistical standpoint, it is obvious that the Kuda is the more well-rounded or overall more balanced gun in the four major categories (Damage, Range, Fire Rate, Accuracy).

Just from looking at and comparing the statistics for both of these guns, the Kuda deals more damage and has a higher fire rate than the Razorback. However, the Razorback makes up for that with a slight statistical advantage over the Kuda in range and accuracy.

While the statistics might not do justice to how the guns actually feel and perform in-game, it is a good justification for the fact that both of these guns are close to one another as the top SMGs in the game. If you are someone who does not trust the statistics that Treyarch puts up for these guns, then maybe the descriptions will help to show the advantages of each of these individual guns. The Kuda is described as a “Full-auto submachine gun. Steady fire rate with balanced recoil.” I think this is a great description of this gun because it is extremely easy to control your shot with the Kuda due to the low level of recoil. With an ironsight and body-look similar to the MP5 submachine gun from Call of Duty 4®: Modern Warfare, the Kuda really is great for close-quarters engagements. With very little recoil and a very even breakdown throughout the statistical categories, the Kuda is just a great choice of weaponry. In contrast, the Razorback is described as a “Full-auto submachine gun. Best accuracy in class, ideal for mid-range engagements.” While I think the Kuda is just as good, if not better, than the Razorback in terms of accuracy (once again, due to the Razorback having more recoil than the Kuda), I do think that the Razorback is better for long-range engagements. The Razorback clearly has better range than the Kuda, which makes it more of a hybrid mix with an assault rifle because it is pretty easy to kill people across the map at long range with this gun, and it is much easier to do so with the Razorback compared to the Kuda. https://www.youtube.com/watch?v=mYOcGU-8GfU Speaking from a competitive mindset, especially with Hardpoint in mind, both of these SMGs will be very effective at breaking the enemy’s control of the hill. The Kuda might have a slight advantage in this regard, simply because of it’s effectiveness at close range, but what the Razorback lacks in close range, it makes up for with pure strength and power. If you tuned in to the gamescom 2015 Black Ops III Global eSports Reveal, you would have seen everyone who decided to use a SMG choosing the Kuda as their first option. The Kuda was on full-display at the Global eSports reveal, and players like Tyler “TeePee” Polchow and Doug “Censor” Martin were really using the Kuda to the fullest; running the objective and winning all the close-quarters gunfights to help put up points for their squads.   https://www.youtube.com/watch?v=UuBkeBH1O8w The Razorback can also be used to break into a Hardpoint. While it might be a little easier to get those “in-your-face” close kills inside the hill with the Kuda, the Razorback can help you get closer to the actual Hardpoint. For example, if your opponent is holding the Hardpoint and you are spawning across the map, you might have more success slaying inside the hill with the Kuda. On the other hand, in the same situation, you would probably have more success winning those long-range gun fights outside of the Hardpoint with the Razorback, giving you a better opportunity to pinch the enemies who are in the hill, leading up to an easier tradeoff in kills and your team gaining control of the hill in the process. However, regardless of which SMG players elect to use, it is important to keep in mind that the Kuda and Razorback each have their own individual advantages. Call of Duty®: Ghosts had the Vector and the MTAR-X. Call of Duty®: Black Ops II had the MSMC and the Skorpion EVO. Call of Duty®: Modern Warfare 3 had the PPM901 and the MP7. Most of the recent installments in the Call of Duty franchise have had two submachine guns effectively utilized in competitive gameplay. Black Ops III seems like it will also be following this trend with both the Kuda and the Razorback being effective submachine guns upon the release of this game on November 6, 2015. When all is said and done, I think that it is safe to say that we will be seeing a lot of these two guns at the start of Black Ops III. Which of the submachine guns from Call of Duty®: Black Ops III has been your favorite to use so far? Let us know by commenting below or tweeting us @eSportsNation.