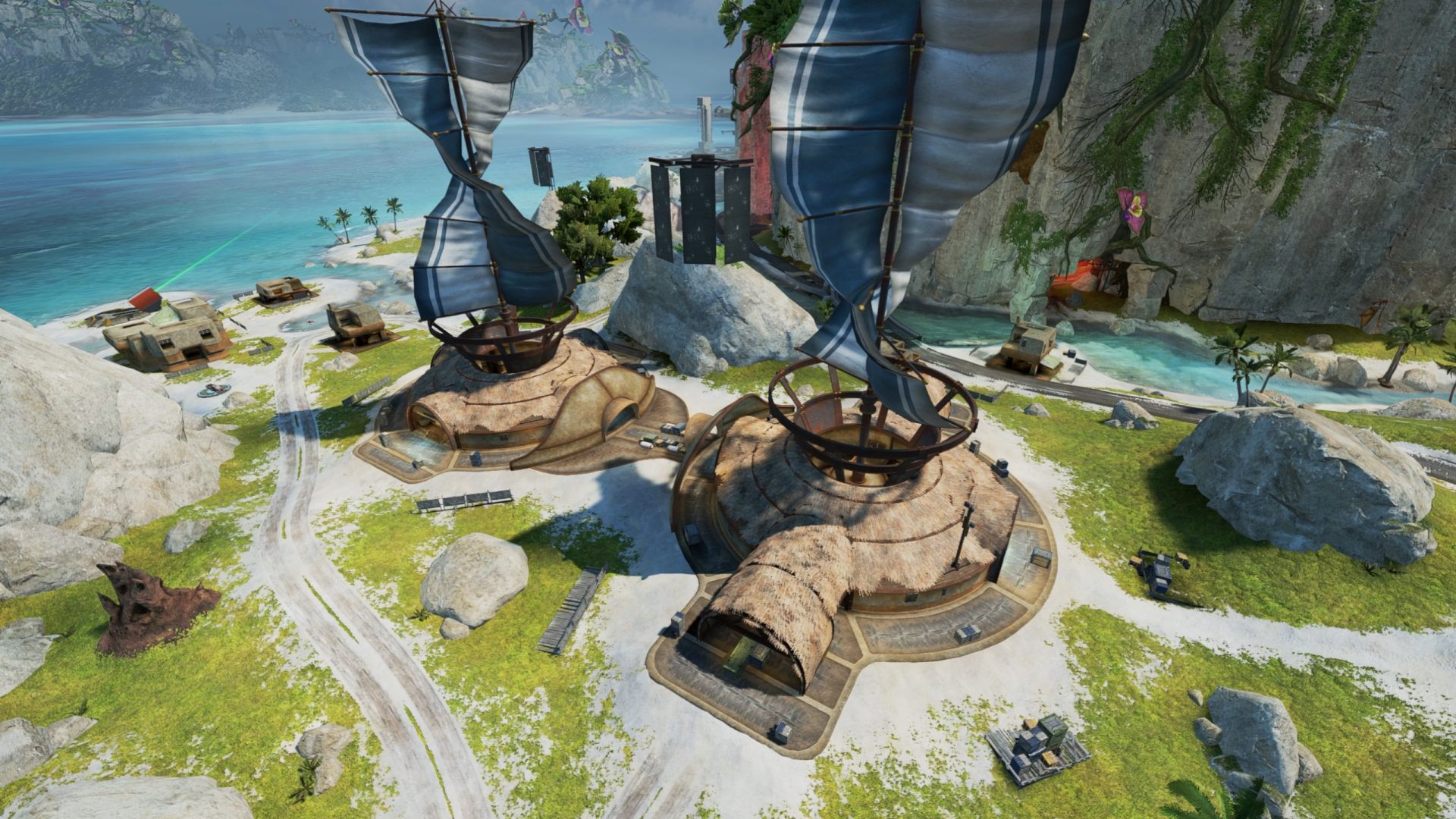 On day two of the $2,000,000 ALGS Championship in Raleigh on Friday, the group stage of the tournament concluded and bracket play began. That meant that the top 20 teams in the tournament earned berths to the winners bracket and a well-deserved break, while the bottom 20 were forced to fight for survival in a losers bracket. By the end of the day, ten teams had been eliminated from the tournament. Many of them were duos, forced to play without full rosters after the original players tested positive for Covid. But PULVEREX, a Japanese team who were playing as a duo, managed to squeeze by on placement points and lived to fight another day, becoming crowd favorites in the process.

The day on the stadium stage in PNC Arena early Friday afternoon began with fans chanting “TSM!” and waving the team’s flag. The much-loved North American squad notched a victory in their first game with great positioning in the endgame, and won its last crucial moments thanks to some late-game dancing from ImperialHal and Verhulst.

The deadly OpTic squad took a 15-kill win in game two, standing strong in a chaotic Overlook endgame. DarkZero, the former Reignite squad that won the Stockholm LAN, looked in fine form early in the day and placed second.

In the other lobby, 100 Thieves took on ZETA DIVISION in a clean fight on the last game of World’s Edge, where 100 Thieves used the rare Wattson-Newcastle composition to great effect against ZETA, winning the final fight with ease. 100 Thieves is the only team using Newcastle with any consistency. At times the Wattson-Newcastle combination seems really strong, but the strategy can fall apart when teams can sneak ordinance and Caustic ultimates beyond Newcastle’s ultimate before the Wattson has a chance to place her Interception Pylon.

In the very next game, a resurgent Alliance obliterated that combination. Set up with a Wattson Pylon and a Newcastle Wall, it looked like 100 Thieves were well-positioned to net back-to-back wins. But the EMEA mainstays had other ideas. Their in-game leader Hakis closed the match with a perfectly timed Horizon lift, giving him a perfect shooting angle on the exposed members of 100 Thieves. Hakis almost took out all three members of 100 Thieves single-handedly, winning his team the game. But one great moment wasn’t enough to keep Alliance afloat. They were later forced into the loser’s bracket to fight for survival, where they performed admirably with their backs against the wall.

A big win for DreamFire, who is playing with two substitutes, secured their winner’s bracket spot. 100 Thieves won another game to finish the series, capping an impressive day for them and their Newcastle comp.

In the contest between groups B and C, Furia continued their standout performance. Led by HisWattson, they won game one and almost game two. Furia ended the group stage as the top team overall, and will continue to threaten the championship hope of other top squads if they can keep up the pace. The Thai trio EXO, determined to show that their success on day one was not a fluke, had another good set of matches as well.

Cloud9, a very dangerous team on Storm Point when things are going their way, took the win in game four. After a rough first set of games, they rebounded nicely and comfortably reached the  winner’s bracket.

As relative underdogs like Furia, Singularity, and EXO Clan soared to success, several top-flight teams were then forced into the loser’s bracket. The EMEA and APAC South regions ran into particular trouble as North America triumphed, securing 9 of its 10 teams spots in the winner’s bracket.

Alliance, Acend, and FA Kitties, the former Gambit roster, were among the prominent EMEA teams disappointed to be in the bottom twenty. Alliance quickly rebounded, showing no intentions of heading out of the tournament early. They won the first game of the loser’s stage with 19 kills and 31 points overall, and continued to post strong performances. Through the latter four games of the eight-game loser’s bracket series, Reject and Alliance extended their lead over the field as Acend and GMT easily rose into the top ten. The survival of FA Kitties was less certain, but they also managed to pull it off and will continue to play.

But the real story of the loser’s bracket was the success of the Pulverex duo, who qualified by a margin of one point, beating out other teams with three players to keep their tournament hopes alive.

But the talented Japanese squad can’t rest yet. They have an uphill battle tomorrow as the bracket stage continues, and another 10 teams will face elimination. The ALGS Championship runs until Sunday, July 10.