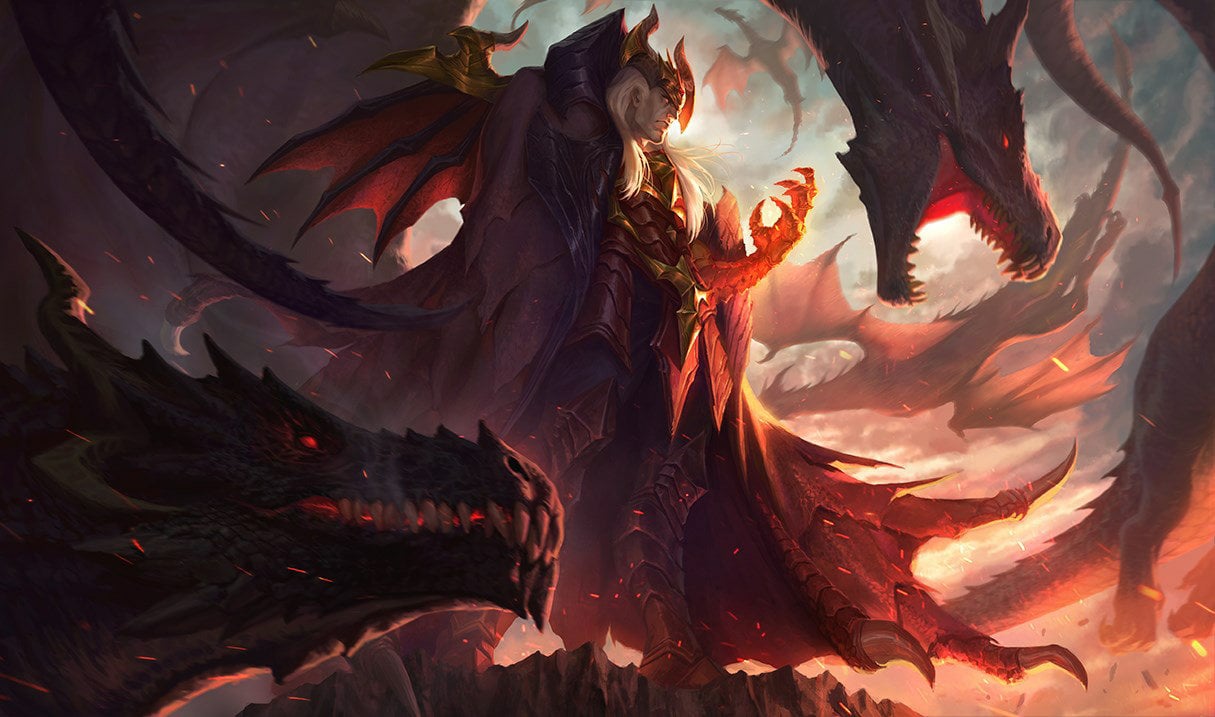 The Teamfight Tactics Set Seven Dragonlands brought the Noxian Grand General back to Convergence, this time with the Dragonmancer, Ragewing, and Shapeshifter traits. A unit that can either be used as a main carry or improve other compositions by activating its traits.

Swain Draconic Ascension’s ability transforms him into his Dragon form, changing his basic attack to fireballs that deal magic damage and replacing his ability to Greater Fireball, which increases the damage and area of effect of the next fireball he casts. With more star levels, your fireball’s damage increases.

The TFT Set Seven champion also has three traits. Dragonmancer brings the Dragonmancer’s Blessing, an item used to choose a Hero, this Hero gains increased Health and Ability Power, which increases by 10% per Star Level of Dragonmancers in play.

Ragewing changes the way mana works innately, being converted into rage that is generated only from attacks and not from taking damage. After a Ragewing unit uses its ability it becomes enraged for four seconds, during which time the unit gains 30 percent attack speed and can no longer generate rage. Activating the Ragewing trait also grants attack speed and omnivamp while your champions are enraged.

Finally, the Shapeshifter trait causes the champion to receive a maximum Health bonus and heals for that amount when transforming.

How to know when to play Swain in TFT Set Seven

TFT Set Seven comps with Swain as the main carry will make maximum use of the Ragewing and Shapeshifter traits to increase Swain’s damage and survivability. The Noxian Grand General can also appear in other compositions with the main carry belonging to any of his traits.

One of the main points for deciding to use Swain as a main carry is getting good items for him and finding several copies of his unit. Since the best-case scenario involves making Swain three stars, ideally, you don’t have too many players in the lobby looking for Swain.

At least one Guinsoo’s Rageblade is required and Augments like Scorch can make a big difference to Swain’s performance. These conditions combined with a starting board with Dragonmancer and Ragewing units can be the signal to make this comp.

Ragewing is the main TFT Set Seven trait used in the composition of Swain carry. To grant Swain as much attack speed and omnivamp as possible, it is best to have at least six Ragewings on the board. Shyvana is an important addition in the later stages of the game as it counts as three Ragewings. The Dragonmancer’s starting unit, Sett, is an important part of the final comp functioning as a lone frontline on one side of your board while the other side protects Swain in a corner.

Shapeshifter is the second most important feature for the comp to work as it can create a good frontline to protect Swain, the longer the enemy takes to get through the units with bonus Health, the more time Swain has to do damage to enemies. In addition, two Shapeshifters are also Jade units, a trait that can be activated from the early stages of the game.

The Dragonmancer trait also helps make Swain more powerful as a Dragonmancer Hero, increasing his Skill Power, and Health. At least three Dragonmancer units are recommended for this. Besides Swain, Sett is also Ragewing, and Ashe is Jade.

Finally, Jade is a trait that can be easily added to a composition that already contains Gnar and Neeko as Shapeshifters. Both Ashe and Karma can take Jade’s third place, as they are both Dragonmancer. The placement of the Jade statue should be such that it benefits not only Swain with attack speed but also the rest of the frontline with healing.

The priority when using Swain as the main carry of your TFT Set Seven comp will be to get him to three stars and maximize his damage while trying to keep the economy in order to reach level eight to find Shyvana more easily. Ideally, search for Swain’s units at level seven and go to eight after you’ve managed to make it three stars. Draconic Augments play an important role during all phases of a game. The best Augments for Swain TFT compositions are Scorch, Trade Sector and Rich Get Richer.

The Trade Sector offers a free store upgrade each round. It’s a simple Upgrade to increase the chances of finding a needed unit each round without sacrificing so much economy by rerolling.

Rich Get Richer is another economy-oriented Augment. It grants 10 gold and increases maximum interest to 7. Depending on the board situation, it can help to stabilize the composition or accumulate more gold to seek Swain at level seven.

The main Augment to increase the damage dealt by Swain is Scorch. With it, every 5th instance of Ragewing champion’s damage deals 33% more damage and is converted to true damage. Converting part of the damage to true damage can be devastating against enemies with powerful frontlines.

For Swain TFT composition to work most effectively, avoid Augments that require you to spread your units across the board. In most cases, it is necessary to surround Swain with other units as he is the main carry and with the Jade trait active the statue counts as a unit for Augments such as Best Friends or Exiles.

Other options are Celestial Blessing for extra healing and Tri Force to boost the power of three-cost units like Swain. Portable Forge is also a solid choice due to the increased power level you get from an Ornn Artifact.

The three main TFT Set Seven items to equip Swain are Guinsoo’s Rageblade, Archangel’s Staff, and Quicksilver. Guinsoo’s Rageblade is important for stacking up attack speed, allowing Swain to build up rage faster to use his Greater Fireball ability. Archangel’s Staff helps increase the unit’s ability power as time passes. With good units on the frontline, there is plenty of time for Swain to deal a lot of damage with his skill. Quicksilver is the default item to protect your main carry from crowd control but can be replaced with other attack speed items if there’s an Augment like Verdant Veil in play.

Neeko is the best unit to equip with defensive items and your best options are Warmog’s Armor, Gargoyle Stoneplate and Redemption. Try to position it closer to the center of the board to attract enemy attacks. Morellonomicon is a very effective item when equipped on Shyvana in the later stages of the game, dealing true damage and decreasing the opposing team’s healing.

Carousel priority for Swain TFT compositions is Recurve Bow, Needlessly Large Rod, and Tear of the Goddess. This will make it easier to build the best Swain items. Infinity Force is Ornn’s best item for Swain.