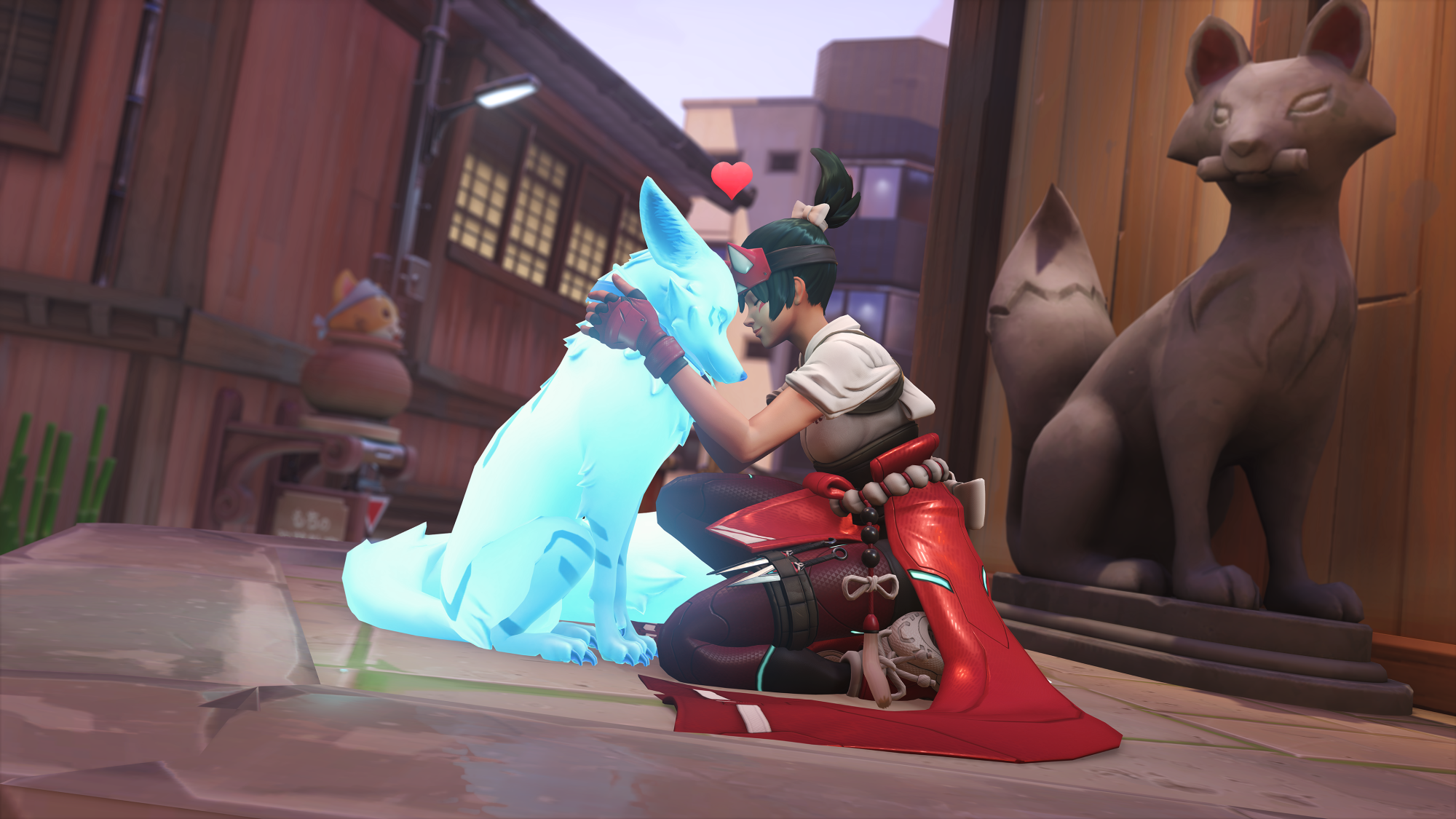 Overwatch 2 will release on Oct. 4 with three new heroes, a new battle pass system, and a ton of cosmetic features. The newest hero to be revealed is Kiriko, the game’s first support hero since Baptiste in 2019.

Though Kiriko was only revealed to the public in the last few weeks, her lore has actually been in front of Overwatch fans’ eyes for over a year. Most of the initial details we learned about Kiriko’s life come from a post on the official Overwatch website. This post includes a lengthy letter written by Kiriko’s mother that talks about her home, her child, and her past. Deciphering this letter is part of understanding who Kiriko is and where she comes from. Since then, Blizzard has given us more insight into her story with her Origin Story video.

Kiriko is a young Japanese woman. Though her age isn’t confirmed, she is likely a teenager or young adult. She is a support hero and has a healing ability, but her most powerful traits are the buffs she gives teammates and the fox companion she carries with her.

Here is everything that we know about Kiriko so far.

Kiriko’s story starts in Kanezaka, Japan. Those who have already played the original Overwatch will recognize this location. Kanezaka was the final map added to the original game before the newest Overwatch 2 maps were developed. The deathmatch map features a colorful combination of traditional Japanese architecture as well as trendy shops and metropolitan structures.

Kanezaka is the home of Kiriko’s family. Her family has watched over Kanezaka both literally and spiritually for generations. Kiriko’s grandmother tended to the fox shrine in Kanezaka for many years before her death and taught Kiriko the healing abilities of the fox.

The family also owns a shop in Kanezaka. Their shop, Yamagami Blades, was a place to buy some of the best swords, blades, and other weapons in the region. Kiriko’s family has a reputation for making exquisite weapons, and her parents are both skilled in fighting with the weapons they create.

Kiriko’s mother Asa Yamagami is so skilled with a sword, in fact, that she was recruited by the Shimada clan, a name familiar to longtime Overwatch players, to teach sword arts to the successors next in line for the head of the family.

These successors, as players might be aware, were Hanzo and Genji Shimada.

Kiriko’s mother taught the two sons of Sojiro Shimada everything they know about using a sword. This, of course, means she taught Genji how to use his Dragonblade.

As Kiriko’s mother taught Hanzo and Genji, Kiriko tagged along to their lessons and also learned how to fight herself. Though there is a decent age gap between Kiriko and the Shimada brothers, they still forged a relationship with each other. But when the Shimada clan fell apart, so did the relationship between all three students of the sword.

Kiriko was presented with a conflict in her childhood between the two maternal figures in her life. Her grandmother, who was gentle and represented healing, and her mother, who was fierce with a blade, both had an incredible influence on Kiriko, but she never chose one path over the other.

The rise of the Hashimoto clan

Overwatch lore experts are familiar with the downfall of the Shimada clan, which was in part brought on by Hanzo’s dismissal of his family after he thought he had killed Genji. With Sojiro Shimada dead, his oldest son sworn out of the family, and his youngest son presumed dead, the Shimada clan began to fall apart. It is not yet known if Kiriko had contact with either Hanzo or Genji during this time.

After being targeted by Overwatch and making enemies out of both Hanzo and Genji, the Shimada clan lost its power in the area and the Hashimoto clan took over Kanezaka. The old Shimada family headquarters remains in Hanamura, one of the maps in Overwatch that will not be making its way to Overwatch 2.

Not only that but Kiriko’s father was captured and taken by the clan to be their swordsmith. At the point at which the letter was written, the family had been separated for eight years.

At this point, Kiriko and her mother are living on the top floor of the building Yamagami Blades once operated from. The shop has been closed and Kanezaka is changed since Kiriko’s childhood. It’s not clear which version of Kanezaka is in the game.

In her mother’s letter, Kiriko is described as one of the many children in Kanezaka looking for their place, discovering the truth in the good and bad of the world. She also mentions her continued loyalty to the fox shrine and the kitsune, a fox from Japanese folklore that has special powers. Though kitsune are sometimes known as tricksters, it seems Kiriko’s family puts their faith in the fox shrine.

Kiriko is said to have joined a gang of other young people in Kanezaka that protected and watched over the town. Kiriko has a special connection to the fox spirit because of her family ties, which gives her the nickname “The Protector of Kanezaka.”

Though the story of how Kiriko came in contact with the Overwatch organization is yet to be revealed, it is clear how her family and their history, as well as Kiriko’s own sense of self, comes forward in her character. She wields blades crafted by her father as her damage weapon and uses paper ofuda to heal her teammates in the spirit of her grandmother. Her ultimate ability is symbolic of the kitsune her mother speaks about in her letters.

Players are hoping Kiriko gets her own cinematic shortly after the launch of Overwatch 2. There will likely be a lot more lore to come for the newest addition to the game’s cast revealed in her animated cinematic, if she gets one.

Once Overwatch 2 releases, there will also be a lengthy list of voice lines and interactions between Kiriko and other heroes in the game that will add even more to what we currently know.