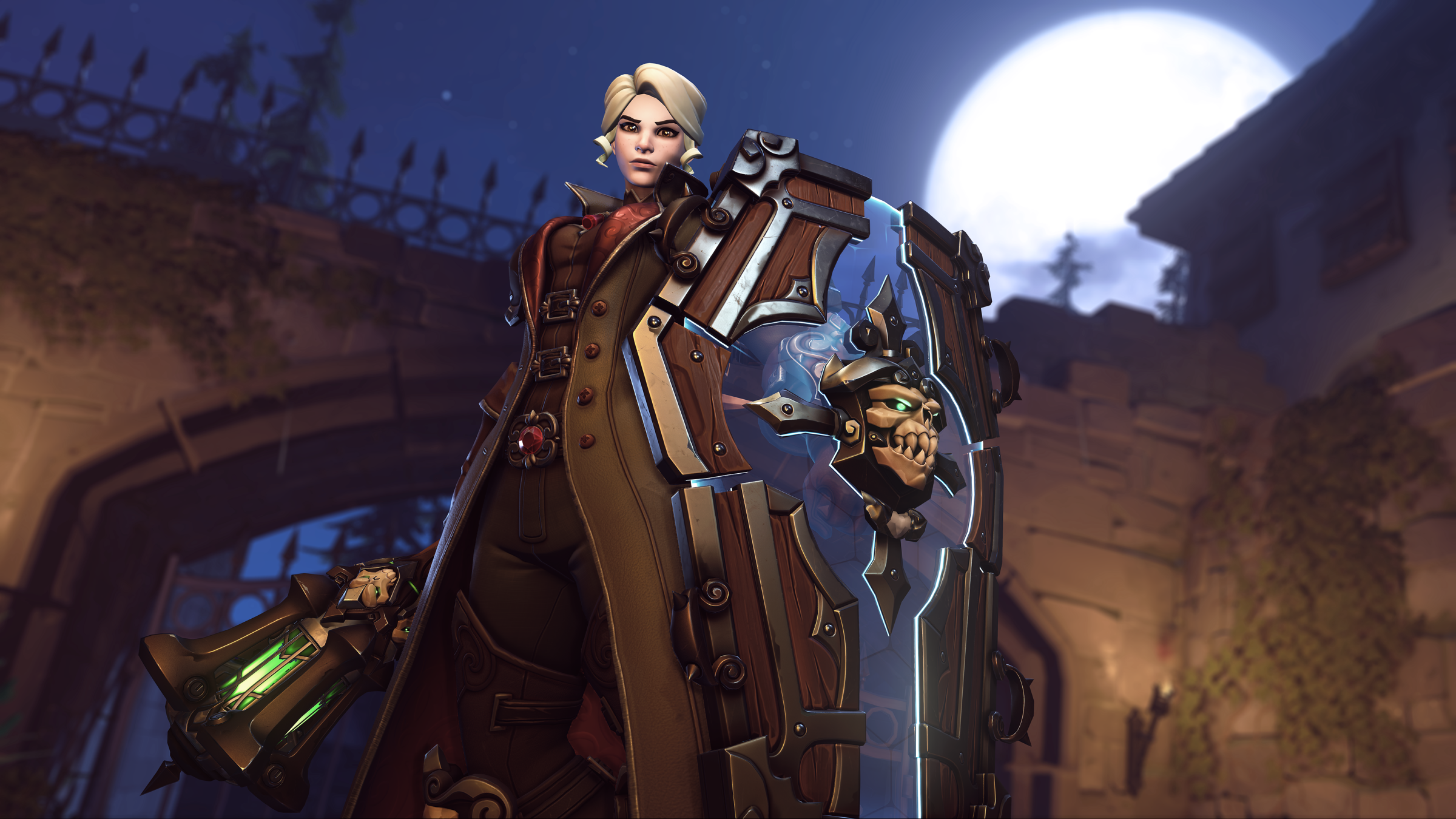 Get hyped up, spooky enthusiasts. Overwatch‘s Halloween Terror event is back, bringing with it new skins, cosmetics, and the chance to play a few good rounds of Junkenstein’s Revenge.

From Oct. 12 to Nov. 2, players can enjoy a minor dose of terror and earn skins while they’re at it. This year, eight new skins are up for grabs, including three Epic skins that can only be unlocked by completing weekly challenges. One of this year’s challenge skins might be the most deeply unsettling thing the Overwatch design team has ever created, so be warned before diving into our full breakdown of the event’s new outfits.

Epic skins can only be earned by completing weekly challenges. Players must earn 27 “points” by playing or winning games of Overwatch in quick play, arcade, or competitive mode.

After five years of being a cyborg ninja for Halloween, Genji has apparently decided to dress up as something a bit more spooky for the season. This skin, available from Oct. 12 to 18, turns the swordsman into a festive neon skeleton. His bright armor has been painted black and accented with bright orange and yellow bones.

In Norse mythology, the einherjar are warriors who have died in battle and are brought to Valhalla. Translated as “army of one,” the title perfectly befits Zarya, who prides herself on her strength and ability to change the tempo of battle. Available from Oct. 19 to 25, this skin gives Zarya’s usual outfit a Nordic remix with fur and leather.

This terrifying skin is concrete proof that someone on the Overwatch design team watched It five days in a row and decided to make it everyone’s problem. Roadhog isn’t exactly the friendliest-looking character in the game, but this Clown skin turns his weirdo dial all the way up to 11. If his new mask with cut-out eyes isn’t unsettling enough, the painting on his belly encourages his enemies to smile. Get this nightmare fuel skin from Oct. 26 to Nov. 2.

Legendary skins can be unlocked in Halloween Terror loot boxes, only available throughout the event’s duration. They can also be purchased for 3,000 gold in the Hero Gallery.

No, this skin isn’t a subtle hint toward a 17th relaunch of Skyrim. But it does hearken back to Norse mythology. The draugr are basically Nordic zombies, roaming battlefields in ghostly armor, searching for a fight. Reinhardt’s usual chrome armor is traded for a wood and metal getup complete with a skeletal head. Blue flames of the dead light up his form and waft from his eyes.

Since her release, Echo has received a full wardrobe of outfits referencing aerial animals and creatures, like moths and birds. This season, she gets a much more terrifying getup. With large ears and spiky talons, Echo has been turned into the omnic representation of a vampire bat. Watch out, though. Those veins on her wings are a heavy hint that she’s out for blood.

If there are vampires, or vampire bats, there must be someone out there to take them down. Everyone’s favorite shieldmaiden gets a Van Helsing-style makeover complete with tall boots, a long trench coat, and eerie white hair. The aim was probably to make Brigitte look a bit more menacing than she normally is, but most Overwatch fans on social media just wanted her hand in marriage. And nobody was surprised.

If you’ve ever called a particularly annoying Lúcio player the devil, this skin is likely punishment for your sins. The speedster has been transformed into a satyr, one of Greek mythology’s most mischievous creatures. Half man and half goat, satyrs were nature spirits that presided over dancing, music, and wine. Lúcio is likely not hitting the Merlot this season, but he’ll definitely throw some spooky jams on for the party.

Just when you think an enemy team is dead and gone, they often come roaring back with a Bastion in tow. This skin, which turns the loveable omnic into a walking coffin, really reflects the frustration of that experience. As usual, the best part about Bastion’s skin is Ganymede, who’s now a tiny, evil skeleton bird.