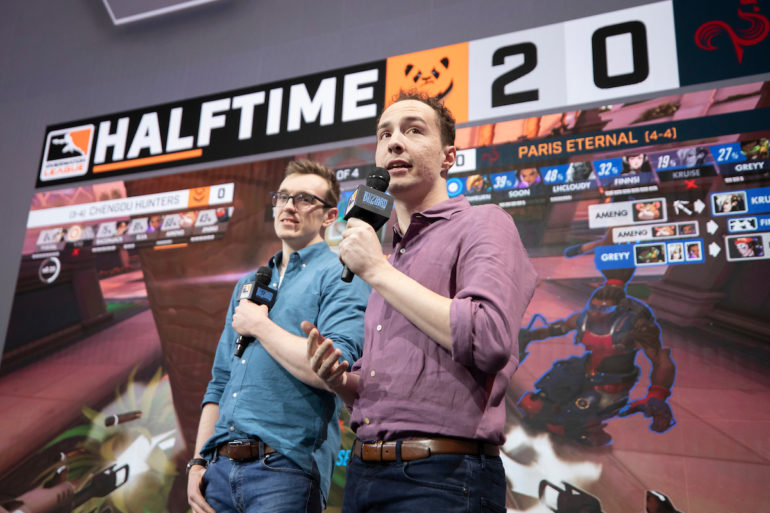 More changes will be hitting the Overwatch League talent lineup. Both Brennon “Bren” Hook and Josh “Sideshow” Wilkinson will move to casting during the 2020 season. The duo has spent the past two years of the league on the analysis desk, providing in-depth coverage before, during, and after matches. This transition brings them back to their original roots in esports casting.

Bren made a statement on Twitter today that he would not be returning to the Overwatch League analysis desk in 2020. “It was a ton of fun these last two years, expanding my skills in showmanship and producing a show, but it’s time to move on,” he said. Just as fans became concerned that he was leaving the Overwatch League for good, he posted the actual casting announcement Tweet.

Bren and Sideshow began their careers casting and analyzing Team Fortress 2 and developing a brand of fun, lively commentary within the community. They eventually moved to Overwatch as the esports scene within the game grew.

As the Overwatch League began in 2017, the duo were placed on the analysis desk to provide insights, predictions, and post-match recaps. While they’ve spent most of the past two years doing analysis, they returned to their casting roots multiple times during the 2018 and 2019 Overwatch World Cup competitions.

This announcement solidifies Bren and Sideshow as the only casting duo guaranteed to return during the 2020 season. Veteran caster Christopher “MonteCristo” Mykles left the league earlier this week and his casting partner, Erik “DoA” Lonnquist, has not stated if he’ll return. Host Chris Puckett also left the league this week.

While some veterans leave the scene, the 2020 talent lineup will be full of familiar faces. Former player Jake “JAKE” Lyon will cast in 2020 with an unknown partner and Scott “Custa” Kennedy will take over the analysis desk.

The Overwatch League’s third season begins on Feb. 8 with games in Dallas and New York.