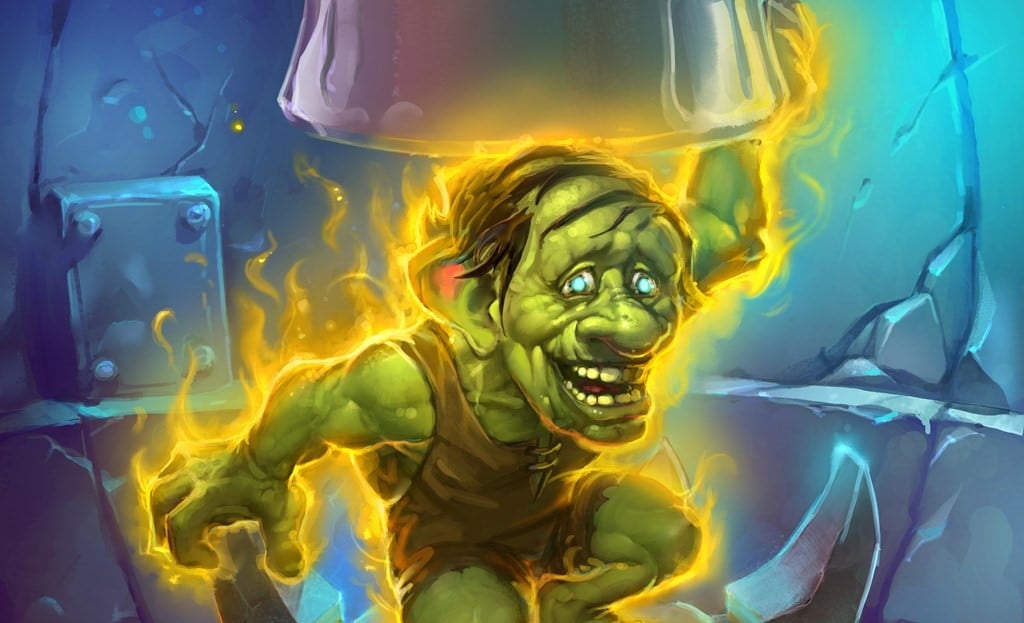 With Boomsday out, the Hearthstone meta is taking shape—and combo is alive and well.

There are a few ways to OTK your opponent right now, and one of the most effective (and most exciting) is Topsy Turvy Priest. The deck is extremely consistent, well-tuned, and, most importantly, incredibly explosive.

Though there is no doubt that the deck is one of the more skill-heavy around, it is incredibly satisfying once you understand the nuances and steps needed to pull it off. Though there are a few weaknesses, nothing can handle Topsy Turvy once it gets rolling.

Before we get into a discussion about individual card choices, we first need to break down the combo itself.

Next, you play a Vivid Nightmare onto a Radiant Elemental and dump all of your Divine Spirits onto Stonetusk Boar. Then Vivid your subject and hit it with Topsy Turvy. At this point, you dump all of your Divine Spirits onto the boar (or as many as you need for lethal) then flip it with Topsy Turvy, copy it with Vivid Nightmare and swing for a ton of damage.

If your opponent has a taunt minion or two, remember that you can copy the boar once it’s flipped with Topsy Turvy for as many Vivid Nightmares as you have in hand.

This may seem very involved, but it is doable once you get the hang of it. You also have the option to draw out the combo if you have two Topsy Turvy in hand. However, you only need to do that if you’re facing a Warrior or Druid with a ton of armor. Most of the time you’ll be able to kill your opponent with the above cards.

Note: Always dump extra cards from your hand. You can only do the above pattern with one or two dead cards. It is OK to take a turn just to trim the fat.

Now that we’ve discussed the combo, it is also important to understand the core that makes it work. You need to draw your deck in Priest, and that won’t happen without your two drops. All of the two Mana Deathrattles draw a card, and that is the key that makes your engine tick. You run out Loot Hoarder, Dead Ringer, or Bloomage Thalnos, let them die to draw, and then re-summon them with Twilight’s Call to draw even more.

You want to achieve that chain every single game. In fact it is so important that you shouldn’t be afraid to use Twilight’s Call for one card if you have a weak hand. Turning two Hoarder/Bloodmage into a turn three call may seem weak, but it smooths out your hand and keeps you digging through your deck.

Do not get caught up in getting massive value with this card. There is no real timing for it, nor is there a certain time to pull the trigger. You just adapt to what’s in front of you. The only exception being when you need to retrieve a Bloodmage Thalnos to combo with Spirit Lash against aggro. Otherwise, fit this in when you can and prioritize it early on.

A perennial combo card if there ever was one, Doomsayer is one of the best ways to deter minions and keep aggro off the early board. This card is multi-faceted, which is why it is so powerful. Playing it on turn two against a one drop buys you invaluable time against aggro. Do not be afraid to play this into a full board just to save health.

One of the key things about Doomsayer is that you can (and should) play it out onto empty boards. This is one of the trickier uses for the two drop, but it is extremely important. If you ever need to buy yourself some time to draw or you want a bit of breathing room, drop the 0/7 down. It can be easy to think that you need to always kill something with it, but the card’s main use is to stall and force your opponent to skip their turn.

Another staple in this build, Giggling Inventor is everything a slow deck like this could want. It eats damage, it stalls the board and, most importantly, it buys you time. The card is shaping up to be one of the best in Boomsday. Instantly being able to flood the board is useful, especially in a list that only cares about living. You’re not going to take advantage of the multiple bodies like other decks, but they still do a good job of saving your health.

Do not be afraid to run out inventor when facing big threats. Annoy-o-Tron is difficult to get through, and while you may be skittish about playing Inventor down against large bodies, it will usually keep them off of you for a turn. Always be aware of what your opponent might have, but the five drop is much more resilient than you think.

The only card to truly worry about is Mossy Horror. Many decks have adopted the epic to deal with Inventor, and it can crush you if you aren’t careful.

The top end of this deck is quite simple. You have your AOE and your big Death Knight. Psychic Scream is incredibly well-primed for the current meta because of how well it deals with all cards, Deathrattle or otherwise. You can treat this as a finisher of sorts. It is the best stall card you have and one you should use wisely.

The other half of your top-curve, Shadowreaper Anduin, is an incredibly strong tool that has two very important uses. One, the Battlecry, which can save you in many situations, and two, the Hero Power. In the past, Shadowreaper’s Hero Power was a combo tool. In this deck, it’s a great way to pick off minions and regulate the board. There are many ways to trigger it multiple times (especially when burning a Radiant Elemental) and it can help you stabilize against aggro.

Also note that there are many situations where you can use Shadowreaper instead of Psychic Scream. Pulling the trigger on scream is many people’s go-to option, but if you can kill two big threats and tank a few smaller ones, that’s the route to go. Taking your time will force your opponent to play into you, giving you more ways to make use of removal.

The first matchup that needs to be discussed is Control Warlock. That is because it is going to be your most difficult. Boomsday introduced us to various new control tools, but the biggest is Demonic Project. The card absolutely crushes combos, and this deck is no exception. You have an edge over other Druids because you can play around it.

The way you do that is by holding minions in your hand. Any time you’re up against a slow Warlock deck you should keep back a few non-important minions such as Doomsayer, Giggling Inventor, or even a Deathrattle minion. Just never get caught with only a Test Subject or Stonetusk Boar in your hand (anything else and you can still do the combo).

Beyond that spell, this game is vastly in your favor as long as you save your Physic Screams and Shadowreaper Anduin for any large taunts. When facing classic Control Warlock you absolutely must save your screams for Voidlord, and when playing against Even Lock you should save them, as well as Shadowreaper Anduin, for any buffed Hooked Reavers or taunted up Mountain Giants.

The other half of the Warlock menace, Zoo, is one of the trickier decks to play as Combo Priest. It is far from unwinnable. The key to this matchup is getting minions onto the board early and utilizing your AOE efficiently. If you can answer their first burst and get them low on cards you should be able to win this one easily. Only when you fall behind do problems start.

To ensure that doesn’t happen, it is important to trade early and use all of your tools to keep Zoo from snowballing. Even something as simple as a Radiant Elemental on two (remember you only need one for the combo) can be the difference between winning and losing.

There are several key cards in this matchup. Psychic Scream should be played as soon as you can, while Shadowreaper Anduin is amazing if he can hit at least one big minion. That may feel like a waste, but the Hero Power can then take over the game (and the armor is a bonus).

Giggling Inventor is also good at buying you time, and Doomsayer against a small board is a must. Play both whenever you have a window. Even if they don’t shut your opponent out, they will slow them down. It also helps to heal often to play above Doomguard, Fungalmancer, and Soulfire.

Beyond Zoo, Odd Rogue appears to be one of the premier aggro decks. The list has two forms, pure aggro and Deathrattle, and both come at you quickly. This is the toughest matchup for Combo Priest because their Hero Power can take out your smaller threats while their larger bodies smash you. Everything in the first six turns should be spent drawing/surviving until you get to Psychic Scream. Playing the seven drop does not mean you’ll win, but by that time Rogue will have very little cards in hand and you should be able to stabilize.

The combo in this game comes second. While you’ll still win with your Stonetusk Boar and Test Subject combo, the goal is to offset as many cards as you can. Your early threats, while weak, can still give you a lot of leeway and soak up damage. Remember, every time your opponent goes after the board, they aren’t going after your face. For that reason, Doomsayer is always powerful here. Just be careful of Vilespine Slayer during the later turns.

There are a few midrange Hunter decks out there right now, ranging from Secret to Deathrattle, but they all operate in the same way. They want to start slow, then speed up to big threats and crush you in the middle turns. Understanding that is one of the most important aspects of this matchup as you’ll need to watch your health. Heal often, and save your Psychic Screams for Lesser Emerald Spellstone. Do your best to hit Spirit Lash on as many minions as possible (including your own Deathrattles) as well.

The number one card to watch out for in this matchup is Explosive Trap. The Secret absolutely wrecks your combo. In fact, if it is up when you plan to go off you can’t win. To get around that, you need to always trigger Hunter Secrets towards the end of the game. It can be tricky to do so, but attack face whenever you get a chance. This is a small window. The best way to get a minion to stick around is Giggling Inventor. Protect the 2/1 behind the taunts and then attack in.

With this deck the goal is to get your Deathrattle minions down as soon as possible. Aggressively mulligan for Loot Hoarder, Bloodmage Thalnos, and Dead Ringer. Doomsayer should be kept against anything except Druid as well.

Then, if you have those options, look for Power Word: Shield and Shadow Visions. Spirit Lash should always be kept against aggro, as can Giggling Inventor if you have the coin and a very strong curve. Twilight’s Call is always a must-keep if you have turn two Deathrattle minions coming before it.

Never keep combo cards in your opening hand (with the exception being one Radiant Elemental against aggro). You want to draw them naturally later one.