That doesn’t include special cards, such as Icon players, or cards that will come out later, like Team of the Season and Team of the Year players.

We separated the best cards in FIFA 20 so far and ordered them by positions. You can test some of these players in the demo version, which was released today. 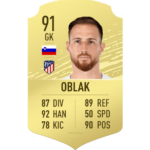 Jan Oblak from Atletico de Madrid is the best goalkeeper in FIFA 20. His high rating is due to his handling and positioning skills, which will make you sweat to score any goals if he’s the opposing goalie.

The German Marc-André ter Stegen has been Barcelona’s goalie for five years. His best attribute in FIFA is his reflexes, so don’t lose your mind if he makes a miraculous save against you.

Alisson Becker is one of the best goalkeepers in FIFA 20 and the second-best Brazilian player, a land known mostly for its attackers. Some fans were mad that the Liverpool goalkeeper is only the third-best goalie since he was a key piece for the team that won the UEFA Champions League title.

The Spanish goalkeeper from Manchester United has been a solid pick for years in FIFA. In the last edition, he ended up receiving a Team of the Year card that had a 97 overall rating, giving him the best goalkeeper card in the game. But his original card will also prevent you from suffering from silly goals.

Although Manuel Neuer is getting old, he remains one of the best goalkeepers in FIFA. If you like to play with Bayern Munchen, you don’t have to worry about the defense. 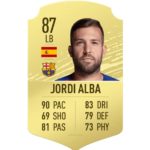 Jordi Alba is the fastest fullback on this list and he’ll surely help you on offense, even though he lacks the height to match the tallest attackers. He’s only 30 years old and will probably remain one of the best at his position.

Joshua Kimmich is the only right back on this list. His offensive stats remind us of the former Bayern Munchen captain, Philipp Lahm. Kimmich can also be used as a centerback and midfielder if you need it.

The Brazilian didn’t have his best season at Real Madrid, but he’s still one of the most skilled fullbacks in soccer. His 89 dribbling will guarantee successful attacks for your team.

Andrew Robertson was the best left back last season and probably deserved better stats. The Liverpool player is an all-around fullback and does his best on attack, crossing powerful balls to strikers.

Alex Sandro is another all-around left back but more physical than Robertson. He can last a full game despite running all the time, supporting the attack and helping on defense. He also is one of the tallest fullbacks in the game, which can be very useful for defending purposes. 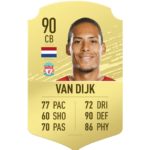 Ramos isn’t young anymore, but he still disrupts the adversary’s attacks and is one of the best scoring centerbacks in the game. He also knows how to pass the ball around, so if you have him on your team, you won’t need to kick the ball every time on defense.

Giorgio Chiellini is the oldest player on this list so far. He just turned 35 but remains the heart for Juventus’ defense. Although he isn’t the fastest centerback, you won’t want to face him in a one-vs-one situation.

Kalidou Koulibaly, on the other hand, is quite the opposite of Chiellini. The Napoli defender is the most physical defender on this list and a good asset for free kicks or corners because of his height.

Gerard Piqué would be similar to Ramos if he didn’t play for Barcelona, Real Madrid’s top adversary. He lacks a bit of pace in FIFA 20 but will compensate with his tackling capacity. 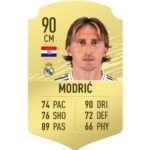 Luka Modrić almost led Croatia to a FIFA World Cup title last year. The Real Madrid man slowed down a bit last season, but he’s still one of the classiest midfielders in FIFA.

This Chelsea player is a defensive beast. N’Golo Kanté won’t stop chasing his adversaries even when the game is about to end. You can certainly rely on him to do the dirty work in the midfield.

Sergio Busquets has been Barcelona’s pillar in the midfield for ages. He’s the slowest player in this midfielder list but he’s good in almost every other stat in FIFA 20.

Toni Kroos is similar to Busquets in terms of pace, but not quite as defensive. He’s precise when it comes to passing and is unlikely to miss more than one pass in an entire game.

At this point, some soccer fans expected Paul Pogba to be the best midfielder in FIFA. He’s had his ups and downs with Manchester United but remains one of the most-skilled players on that roster. Although he won’t let you down on defense, Pogba does his best to create plays. 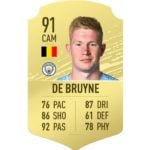 Kevin de Bruyne is a strong central attacking midfielder. The Belgian is deadly when it comes to long-distance shots and through balls. You’ll want to keep him close to your strikers and wingers because that’s where he makes his magic happen.

Christian Eriksen is another Premier League player, but with totally different characteristics. You can’t rely on Eriksen to scoring often, but he offers a powerful option for set pieces.

Marco Reus didn’t have the career that everybody imagined, but he remains one of the best when it comes to Bundesliga and FIFA. His high pace allows you to attack constantly with him, but he’ll most likely need to be substituted in the second half if you don’t want to risk having an injured player on the field.

Enjoy the Spanish man while you can, because he’s most likely retiring after this season. Silva isn’t fast, but he has the vision and passing skills to create the right plays for your striker.

Paolo Dybala almost doesn’t excel in any characteristic apart from his dribbling skills and probably shouldn’t be one of the best central attacking midfielders in FIFA 20 because of his last season. But now that EA can’t change his stats, all you have to do is take advantage of one of the best players from Juventus. 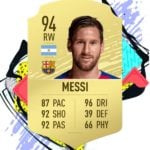 There isn’t much to talk about with Lionel Messi that you don’t know yet. The Argentinian has been one of the best players in the world for the past 10 years and that surely translates to FIFA. He’ll carry your team to victories if you have him on your side.

He didn’t have the best season of his life, and for some specialists, he didn’t deserve to be the third-best player in FIFA 20. Neymar knows all the skill moves and is deadly with both legs, so that makes him a powerful weapon to have on attack.

Eden Hazard went to Real Madrid this season and will try to take down Messi for the La Liga’s best player award. The Belgian will have tough competition but won’t face many problems if he shows all his tricks from his days with Chelsea. Be sure to abuse Hazard’s dribbling moves if you have him on your side.

Mohamed Salah finally made it into FIFA‘s top 10. The Egyptian plays a pivotal role on Liverpool and that didn’t quite translate to FIFA before. He’s one of the best when it comes to scoring goals and that pace will help him get in good positions at least two or three times in a match.

Raheem Sterling also deserved to be one of the best. He’s evolved so much since Pep Guardiola started training Manchester City and has become a true goal machine in the Premier League. In FIFA, he doesn’t have that capacity yet, but his 93 overall pace skills certainly will give any defense trouble.

Sadio Mané is the best player for Liverpool when Salah isn’t feeling it. He’s the fastest winger on this list and is also one of the most physical wingers in the game, so you won’t have to substitute him in the second half. 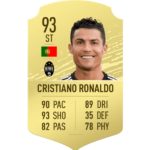 Just like Lionel Messi, Ronaldo is on another level. He’s the most lethal striker in the game and can score goals by any means, whether he’s shooting or heading. Be sure to cross all your corners in his direction because he’ll most likely score.

Kylian Mbappé is by far the youngest striker on this list and he’s the second-best. He’s also the fastest striker, even surpassing Aubameyang, who held that spot for years. With Mbappé on one side and Neymar on the other, you won’t have to worry about scoring goals.

Kun Agüero is one of the best players in FIFA when it comes to a one-vs-one against the goalkeeper. His shooting skills make it easy to nail all the scoring opportunities you have in a game.

This Bayern Munchen man is the one player who remains from the team’s former famous trio with Arjen Robben and Franck Ribéry. If you play with Bayern, be sure to abuse Alaba and Kimmich’s crosses toward Robert Lewandoski since he’s one of the most physical strikers in the game.

Harry Kane is similar to Lewandowski—a bit slower but with high passing skills. He forms a great duo with Christian Eriksen, but don’t move him around too much because he does his best in the box.

Antoine Griezmann arrived in Barcelona this season and will form a strong trio with Messi and Luis Suárez. The French player is an all-around striker who doesn’t excel in any characteristic apart from dribbling.

He’s getting older, but that doesn’t mean he isn’t lethal anymore. You can create a lot of plays with Messi and Griezmann that will put Suárez in an excellent position to finish the play. After all, shooting is what he does best.