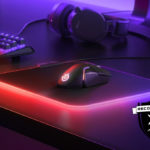 It may occasionally be tempting to slam your new gaming mouse onto a desk or use it without a care in the world. But most desk surfaces are known to cause your mouse feet to age faster and are just not as slick as mousepads.

Though there are countless mousepads that will get the job done in the market, many lack the style and look out-dated since they fail to match your setup’s color scheme. Just like it happened with everything gaming related, RGB also found its way to mousepads and turned them into the perfect RGB accessories to compliment your gaming setup.

While it’s easy to pick a regular mousepad after you decide on your surface type, with the implementation of RGB, the process became more complicated. Apart from different color ranges and animations, companies found different ways to utilize the power that a mousepad would use to wirelessly charge phones and mice.

The rundown of our favorite RGB mousepads has something for every gamer and each will be a great addition to your setup.

Razer’s Goliathus mousepad series is a stable choice for any kind of gamer since you can choose between a speed and a control edition. For the Goliathus Chroma, however, Razer mixed the two to create a surface suitable for both playstyles.

Goliathus Chroma takes the already successful formula and adds some bling to the mixture. Though it doesn’t have multiple customizable lightning zones, its entire border switches from one solitary color to another. Considering its price range, the trade-off is well worth it and the colors are also vivid.

In the early days of gaming mousepads, SteelSeries’ QCK was the ultimate rival of Razer’s Goliathus. The QCK series also had variants with different surfaces and Prism offers the best of both worlds.

The QCK Prism features two surfaces stacked on top of each other, but you can take off the initial surface and choose between a micro-textured cloth surface and a hard polymer side. Its regular version is 14 inches wide and 11.5 inches long, with a thickness of 0.3 inches, while the XL version almost triples it in width.

Its RGB is also one of the best in the market. With 12 different RGB zones and vibrant colors, it can become a light show by itself in a darker room. SteelSeries’ Engine 3 software also allows users to make customizations that may seem endless and you may end up spending hours while working on your personal color scheme.

The program also features game modes which allow your mousepad to change colors depending on your in-game situation, meaning the mousepad can suddenly become red if you have low HP in Dota 2, CS:GO, League of Legends, or VALORANT.

The name Omen may sound familiar if you were in the market for a gaming PC within recent years. It’s a product line of HP that’s dedicated to gamers.

The implementation of RGB into mousepads meant they would require some power to function. HP turned this into a chance to make one of the first mousepads that’s capable of wireless charging. The Outpost comes with a five watts Qi wireless charger that allows users to top off their electronics.

The charger can also be a life-saver if you have a wireless mouse that supports wireless charging, since you will be able to charge it in-between rounds. The implementation of the charger comes with a cost since the Outpost only features RGB zones and one of them is the small Omen logo on the top.

The Outpost is 13.63 inches wide and 13.55 inches long while also supporting two different surfaces. The surface is reversible and features a cloth side alongside a hard plastic one.

Most RGB mousepads cost significantly higher than regular ones. The MP750 costs even less than most regular pads, however. Though it doesn’t have the brightest of colors, it’s a solid budget option.

The MP750 comes in three different sizes, XL, L, M, and they are all spill-resistant. Unlike most of its competition, it comes with a single soft cloth surface with a rubber base.

Though the lighting options of the mousepad may be limited for RGB enthusiasts, a physical control button on the pad makes up for it by allowing you to switch between profiles easily. The color schemes of the profiles are customizable via the Cooler Master Plus software and there are five different color modes to choose from.

All RGB mousepads have something special to offer. Razer Firefly V2 offers the most vibrant colors in the market with a total of 19 RGB zones.

The Firefly V2 is 14 inches wide and 10 inches long. It has a rubber base and features a single surface which Razer defines as “micro-textured.” The surface resembles Razer Goliathus Speed’s texture and has a great gliding feeling. It also comes with a braided cable to ensure long term durability.

All 19 RGB zones can be customizable with the Razer Synapse 3 software. Alongside the seven presets it comes with, users can adjust the overall brightness and sync their RGB with other Razer products they use.

Redragon is a brand gamers became familiar with due to its budget but high-quality offerings. The company keeps its costs down by trimming all the edges which don’t affect the end product in terms of performance.

The Redragon P010 comes with 11 customizable lighting modes and features a physical button to adjust its brightness on-the-go. It has a wide color range and a micro-textured finish that offers more speed than control.

The P010 is medium-sized with its 13.7-inch width and 9.8-inch length. The rubber base prevents any kind of slipping that may occur in intense gaming situations while the top layer is waterproof to allow you to enjoy your drinks without the fear of ruining your gear.