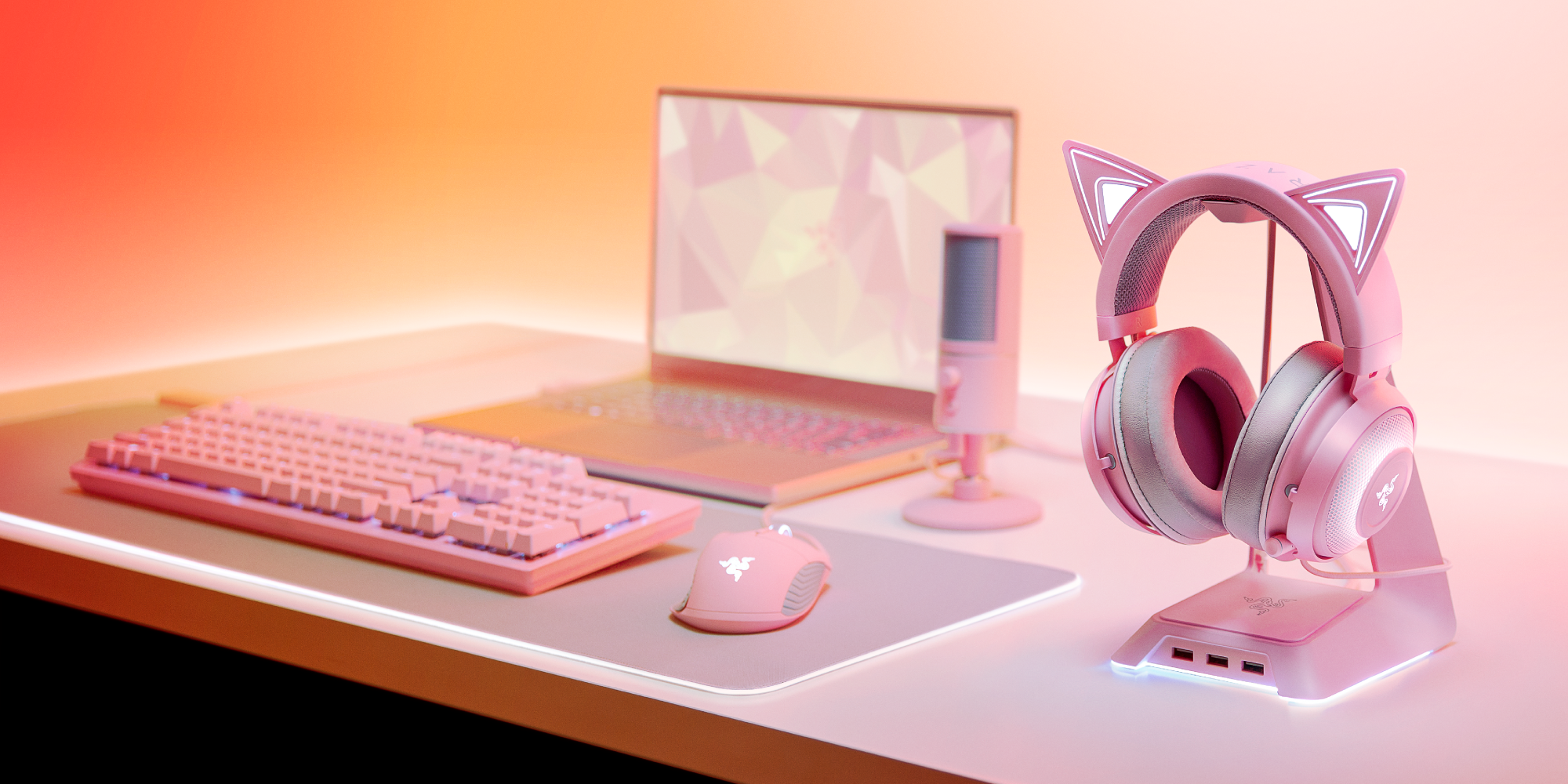 High-quality headsets put players in the center of the action and add to the immersion. The best headsets have clear sound and voice quality and are durable enough for long-term use. Headsets should also be comfortable to wear for hours and have features like adjustability and thick padding.

There are many excellent gaming headsets out there, but most of them look alike. Black gaming headsets dominate the market, with only a few manufacturers offering colorful alternatives. Buyers looking for pink headsets are limited to a handful of high-quality options from reputable companies. These pink headsets are comfortable for long gaming sessions and feature virtual surround sound and Bluetooth connectivity.

Here are the five best pink headsets in 2021.

Razer’s Kraken Kitty boasts the performance and features of the standard version while adding a splash of color. Everything from the earcups to the headband and microphone is bright pink, which contrasts well with the grey finish on the earpads and inner headband. A pair of removable RGB cat ears complete the look and light up the room.

When it comes to design, the Kraken Kitty shares many similarities with other Kraken models. It has the same chunky shape with large ear cups housing 50-millimeter drivers. It also has a retractable microphone and on-ear controls for the volume and virtual surround sound. Like other Razer models, the thick, gel-infused earpads keep users comfortable for long gaming sessions.

Apart from its looks, the Kraken Kitty also stands out in the performance department. It connects to the PC with a USB sound card and has THX Spatial Audio surround sound. Some users prefer virtual surround sound because it gives them a better sense of their surroundings. Other users don’t hear much of a difference and prefer stereo audio.

It’s hard to go wrong with the Kraken Kitty because it looks and performs great. Some of its drawbacks are that it may be too big for some users and it’s pricey. Since the Kraken Kitty only works with a USB connection, it’s unsuitable for consoles requiring a 3.5-millimeter connector.

Full-pink headsets can be too bright for some users. HyperX’s Cloud MIX combines white with rose gold trim for users wanting a more discrete headset. This headset is reasonably priced and offers multiple connection options, making it ideal for PC or console gaming.

Like most HyperX headsets, the Cloud MIX features a sturdy construction. The padded plastic headband has a metal frame running through it. Since all the cables are detachable, users can easily replace them if they get damaged instead of replacing the whole headset.

This headset is an excellent option for users with more than one gaming platform. It has a more subtle styling than the other headsets but boasts multiple connectivity options. The only drawback is that there’s no 7.1 surround sound like on the Kraken Kitty and G2 II.

The Razer Kraken BT Kitty Edition has a similar name to the Kraken Kitty, but its capabilities are completely different. Compared to the Kraken Kitty with a USB connection, the BT Kitty Edition connects with a Bluetooth connection. The Bluetooth connection reduces the clutter caused by cables, and it’s compatible with a range of devices, including PCs and mobile phones. Users get around 50 hours of battery life with the lighting off, and it comes down to 20 hours with the lighting on.

Another significant difference between the two pink Razer headsets is the microphone design. While the Kraken Kitty has a retractable boom microphone, the BT Kitty Edition features two built-in microphones.

The BT Kitty Edition is a better option for younger players or users with smaller heads, considering its size. Its Bluetooth capability makes the BT Kitty Edition ideal for mobile games and single-player PC games, but it might not be the best for competitive gaming.

Buyers looking for a pink headset for multiple devices might consider the Cougar Phontum S Pink. Unlike the Kraken Kitty, it connects using a standard 3.5-millimeter connection, making it compatible with a broader range of devices, including PCs, consoles, and some mobile phones.

Most of the design elements on the Cougar Phontum S Pink vary from the Kraken Kitty. They both have massive earcups, but that’s where the similarities end. Considering its lower price, it’s not surprising that the Cougar Phontum S Pink has no RGB lighting or cat ears. Instead of a retractable microphone, it has a detachable cardioid microphone. Another difference between the two headsets is the inclusion of inline volume controls instead of the on-ear controls found on the Kraken Kitty.

Despite its affordable price, the Cougar includes two pairs of earpads with the Phontum S Pink. Both sets are made from leatherette-covered memory foam, but one is much larger than the other. According to Cougar, the larger set is meant for gaming at home, and the smaller set is used to take the headset on the go.

Cougar’s Phontum S Pink has a lot to offer. It works on a wide range of devices, comes with two sets of earpads, and doesn’t cost much. On the flip side, it might be too bulky for some users, and it only offers stereo sound instead of virtual surround sound.

Edifier is known for its high-quality bookshelf speakers, but it also makes affordable gaming headsets like the G2 II Pink under the Hecate sub-brand. This headset emulates the Kraken Kitty by having virtual 7.1 surround sound and a USB connection.

Edifier’s G2 II Pink has an all-plastic construction weighing 9.3 ounces with sliders to adjust the headband. Like the Kraken Kitty, it has cat’s ears on a full pink frame with grey trim. The lighting on the G2 II is vivid and takes the form of a Hecate logo with a circle around it and sits under a mesh grille. The microphone is detachable, and the USB sound card has inline controls for the volume, microphone, and lighting.

Like many virtual 7.1 surround sound headsets, the G2 II works with a USB connection and requires software to work. Although the software is basic, it allows users to adjust the equalizer and other settings. The G2 II is one of the most affordable ways to get a pink headset with surround sound and offers impressive value.