The new year is almost here, and Krafton has released the first look of a new map coming to PUBG: New State in 2022.

In a Happy New Year message, the developer revealed that it was working on a new battleground that will launch in mid-2022. While details about it weren’t revealed, it appears to have a rough terrain with vegetation and mountains.

Krafton is also releasing two maps, Kiki and Tiger, into PUBG: Battlegrounds soon. Based on the images, the new map doesn’t appear to resemble either of these.

Currently, PUBG: New State has two battle royale maps, the exclusive Troi and an upgraded version of Erangel. Both are 8×8 kilometers in size. Krafton hasn’t revealed what the size of the upcoming map to New State will be. 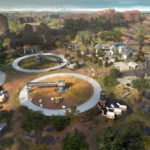 The developer also revealed that it was working on a “lot of new content” which will be released in 2022. The first of these will come out in the first two months of next year. More details will be released later.

PUBG: New State was released over a month ago, but players have been complaining of connection issues, optimization problems, and bugs in the game. Several updates have been released to fix these issues.

Krafton promised players today that one of its main priorities next year is to continue making updates and improvements to the game. The developer said that it aims to do this through “open and transparent communication” with the players.

Krafton has also released a new year’s gift which can be claimed until Jan. 10. Players can redeem the “HAPPYNEWSTATE” coupon code to get six Chicken Medals and three Royal Chest Tickets.