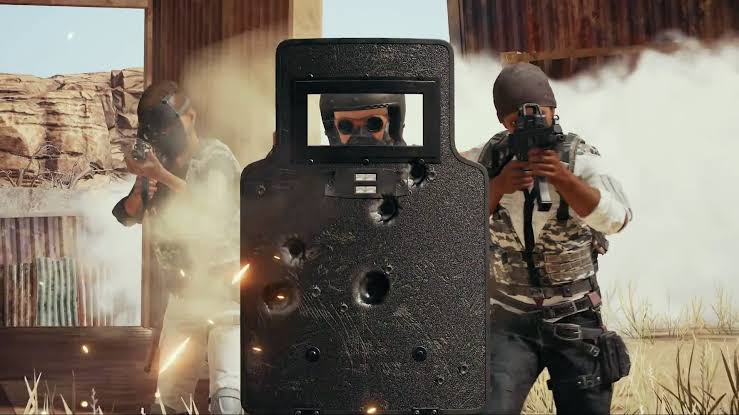 ­PUBG Mobile recently released its 0.16.5 beta for select testers. And now PUBG Mobile YouTuber, Mr. GHOST GAMING has leaked some of the features present in the beta.

In his latest video, he showed gameplay footage of the “Riot Shield.” The shield has been added to the Team deathmatch loadout in the beta. Whether a player can equip a primary or secondary weapon with the shield wasn’t revealed. It remains to be seen if the shield will make its way to the Classic mode or will be exclusive to the Evo-Ground modes of the battle royale game.

The Riot Shield isn’t something new to PUBG PC fans. The defensive piece of metal was teased by PUBG Corp. in the PUBG Xbox E3 2018 trailer. It still hasn’t been released, however. It seems that mobile players will get the shield before the PC counterpart of the game does.

Other things present in the 0.16.5 beta included a snowmobile, a new domination mode, and a new map. The snowmobile will replace the normal bike in Vikendi, Mr. GHOST GAMING revealed.

The domination mode, which was already revealed in a past beta for Game for Peace (PUBG Mobile’s Chinese version), is finally making its way to the global version. There are three positions in this mode—A, B, and C. At the beginning of the match, a random position will be activated and the two teams of four players each have to battle for gaining control of the point. After three minutes and forty seconds, the position will rotate to another place on the map. According to Mr.GHOST GAMING, there will be two rounds in each match.

A new map called Town will also be released exclusively for playing the Domination mode.

There has been no news of the release of update 0.16.5. It will likely make its way to the game with Season 11. The tenth season of PUBG Mobile ends on Jan. 8, so fans can expect the update to drop around then.