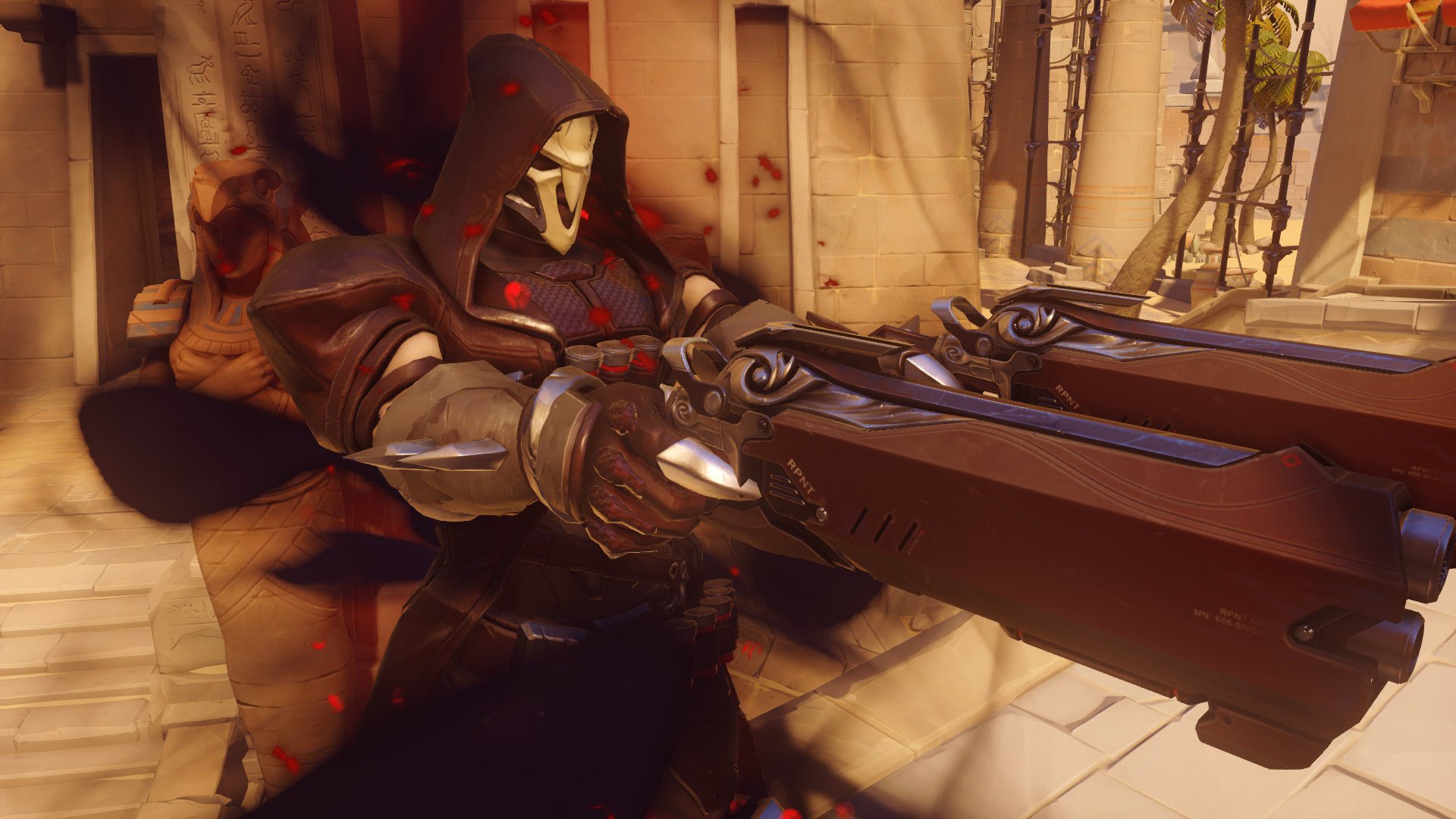 Reaper was one of the first characters shown by Blizzard in the initial Overwatch animated short. Since then, cool and edgy players have flocked to the shadow assassin to deal out damage. But before you go in game and creep around, find out the best way to play Reaper.

Reaper’s main source of damage is his Hellfire Shotguns. Beside his ultimate, Reaper’s only damaging ability is his primary fire. The shotguns are similar to any other shotgun: They pack a lot of damage up close but are not good at range. Reaper has eights shots split evenly between his two shotguns. The shotguns deal anywhere from 40 to 140 damage per shot, meaning Reaper can melt just about any hero in the game.

All of Reaper’s ways of dealing damage (the ultimate, primary fire, and melee) received a significant buff in a balance change that gave him lifesteal and those abilities. With any damage that Reaper deals, he heals for 40 percent of that damage. This allows him to stay in fights longer while keeping his health total higher, even without a healer. When in danger, always try to hit back at your enemy as it may keep you alive long enough to either run away or kill them. This healing also counts for melees and even environmental kills, so if Reaper receives credit for a kill when an enemy jumps off the map, he’ll get a nice heal.

The best way to win with Reaper is to maintain the element of surprise. Stay in the shadows until you find the perfect time to strike.

“Death Walks Among You”

To properly use the power of the Hellfire Shotguns, Reaper needs to get up close and personal with his targets. He can get into position to deal damage with Shadow Step. Reaper picks a target location that’s a maximum of 35 meters away from him and then teleports to it. While the location is marked, Reaper is invulnerable coming out of Shadow Step, meaning he no longer will be immediately headshot by an enemy Widowmaker or Hanzo. He can also use the ability in midair, slowing his fall and allowing him to teleport after jumping off of ledges.

If you find yourself in trouble after using Shadow Step or during the run of play, Reaper has a convenient way to get out of danger. Wraith Form makes Reaper invulnerable for up to three seconds. Using this will allow you to run away from danger without the enemy being able to attack you. After the recent balance change to Wraith Form, you’re now able to cancel the ability whenever you need to. This allows for wider use of the ability, since you’re able to use it to get out of danger and run far away, or just to avoid quick burst damage and come back quickly to deal damage. This ability also reloads Reaper’s Hellfire Shotguns, so it can also be used as a quick reload to keep outputting damage in those crucial and hectic fights. The change also increased the movement speed of the ability to 50-percent increased speed so that you can get further away.

Another useful way to use Wraith Form is to stall out a point. Since Wraith Form makes you invulnerable, it’s a handy tool to stall time on the point for the rest of your team to arrive, whether you’re on attack or defense. Reaper’s Wraith Form in this instance allows him not only to stall, but to be more risky when he fights. Tactically overextending past where most heroes could safely go and then using the ability to escape danger is something the best Reaper players have mastered.

Reaper’s ultimate is Death Blossom. Using this, he fires his Hellfire Shotguns in an eight-meter bubble around him. It deals 170 damage per second for a maximum total of 510 damage. This ultimate lasts for three seconds and can completely wipe out an enemy team that’s close together. An effective use of Reaper’s ultimate can require all of his abilities to set it up.

Use Shadow Step to position yourself so that you can surprise the enemy team. Wraith Form can either help you get up-close and personal or to escape after using Death Blossom. Hellfire Shotguns should be used to finish off any low-health targets.

Reaper’s ultimate ability is useful against squishy targets. While he should be primarily used to fight healthier and larger opponents, his ultimate locks on and lays its max damage into whoever is exposed to it, including thin heroes. Using your ultimate against a tank will most likely not kill them without some help, but using it against a group of healers and DPS will ensure a successful teamfight since they’ll have almost no time to react.

Reaper does his best work slinking around in the shadows. As Reaper, you’re getting the most out of the hero when your enemy doesn’t see you until it’s too late. Reaper can work around the map to get to the backline and burst them down to break up the enemy team or take down the main tank to open up an engage for your team.

A Nano-Boosted Death Blossom can be a devastating thing where no enemy is safe. This combination previously defined the “Beyblade” meta, and despite the nerfs, it remains a strong play to win a teamfight.

Since Reaper works best when he’s right next to his opponent, Lucio provides a way to get in close. Lucio can speed boost Reaper into the enemy team so that he can put out maximum damage.

From the very first Overwatch animated short, it was clear that the rivalry between Reaper and Winston went deep. Although they’re shown constantly fighting in the shorts, in the actual game, Reaper holds the advantage. Due to Winston’s large hit box, Reaper is able to land multiple pellets from each fire of his Hellfire Shotguns. Reaper quickly tears through Winston’s high health when fighting up close.

Although D.Va is a tank with a big hit box, her Defense Matrix can completely negate your entire ultimate. If she’s near when you start your ultimate, she can use her Defense Matrix to block that damage and leave you in the middle of their team without having done much damage.

Reaper is a tank-buster through and through, and a short ranged one at that. Because of this, his ability to duel with other DPS heroes is hampered by the array of long-range abilities. If a Soldier: 76 or Widowmaker is giving you a hard time, consider playing off angles where it’s difficult for them to see you. If they make a mistake and push too far forward, punish them with your Hellfire Shotguns.