Though Riot Games has been taking things slowly regarding Wild Rift’s launch, more players get to try out the game each passing month as the developer invites more regions to the beta.

Wild Rift may look like a League of Legends port from a distance, but the game was built from the ground up to ensure compatibility with all mobile devices. This also allowed Riot to make Wild Rift easier to play and even try out new mechanics that could only be pulled off with mobile controls.

Despite being its own game, Wild Rift features the core characteristics of League, even emotes. Dances have been a regular part of League, but emotes have only been a part of every League player since 2017. They’ve become the ultimate way of expressing gratitude, frustration, triggering your enemies, or even passive-aggressive flaming in some cases.

There is a handful of emotes to try out even in Wild Rift’s meta, but using them isn’t as easy as how it’s in League.

Here’s how you can dance and use emotes in Wild Rift.

How can you use emotes in Wild Rift

The first thing you need to make sure to use emotes in Wild Rift is making sure that you have them unlocked. Emotes can be unlocked by completing quests, and they’re likely to become purchasable through the in-game shop after the game’s release, just like how it’s in League.

If you haven’t unlocked any emotes yet, completing all the currently active “Day one” missions will award you with the Good Job emote, which is an armored thumbs-up. You can check out your available missions through the Event section that you can access through a loot-box icon below your Summoner Icon.

After securing yourself and emote, you’ll need to: 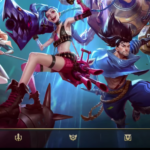 How to dance in Wild Rift?

Dances exist in Wild Rift, but players don’t have any means of activating them as of now. It should be noted that there are only a few champions that have dance animations, and they were showcased as idle animations.

This means that dance animations will start taking place on champions that have them available after you stand idly by for around 45-50 seconds. This makes them quite challenging to use to tilt your enemies and can turn you into a sitting duck in the process.

Riot hasn’t made any official comments on why the dances are absent in Wild Rift, but it could be considered a move to lower the game’s size. Considering most non-flagship mobile phones tend to be limited on storage, having dances for each champion could turn into a problem in the future. Though not all champions are available in Wild Rift, having the full squad ported can drastically increase the game’s file size.

This is just a theory on why they could be missing, however, and Riot may choose to include dances either natively or as purchasable shop items with the game’s release.