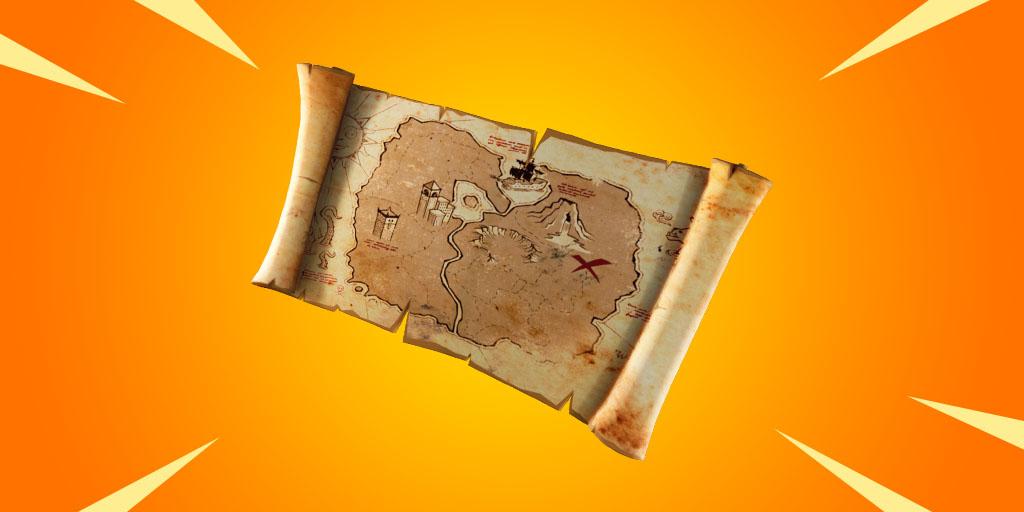 A new item is set to be released in Fortnite: Battle Royale, and it has everything to do with the pirate vibe of season eight.

The Buried Treasure item is coming soon, according to a News message in the game. All the information we have about it so far is that players will have to “scour the island for hidden loot” after using it. But there’s some stuff we can speculate about the Buried Treasure when we take a look at models and files that leakers found that could be related to it.

Renowned Fortnite leaker FortTory published a theory about what the Buried Treasure is and where the treasure it hides could be.

The item is a Fortnite island map in a different style that shows a red X east of the map, southeast of the volcano. This might mean that whoever gets the Buried Treasure could have to go to that spot and find a special kind of chest, or at least a big number of regular chests. There’s already an area in the I9 square of the map that has a huge X made of stones with chests right in its center, though.

But what leaked models reveal is that there’s actually a new chest, a shovel, and dirt spots in the Fortnite files. This means that there could be some kind of new way of finding chests and that this existing spot in the I9 square has nothing to do with where players who hold the map have to go.

If the new treasure chests, dirt spots, and shovel are related, it’s likely that the Buried Treasure item will highlight a few dirt spots on the map where players can find a treasure, and they could also be able to dig the treasure after using the item. That way, there wouldn’t be just one area on the map to find the treasure, but several of them with more than one Buried Treasure that players can dig.

Considering it’s a special item and most likely a Legendary one, the treasure that players uncover will likely have high-rarity loot in it, or at least one Legendary consumable, one Legendary weapon, and several materials and other resources. It could be something as impactful as a Loot Llama and a Supply Drop in a single item.

But we still have to wait until the Buried Treasure is added to Fortnite to find out exactly how it works. It’s probably coming to the game in tomorrow’s update, which will be the first of season eight.