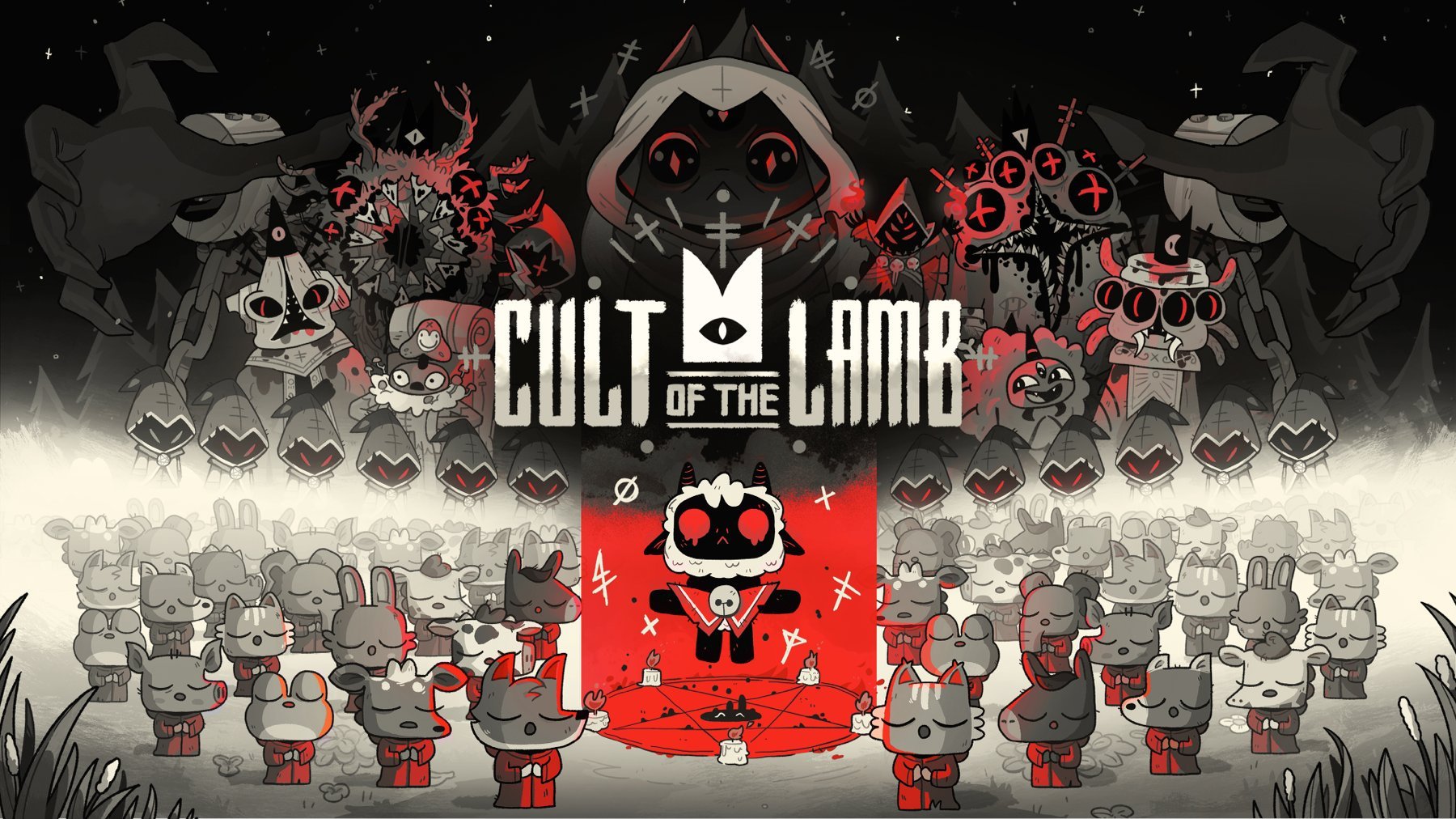 This year has been great for games involving cute, cuddly creatures. Kirby and the Forgotten Land was a hit, Tunic is one of the best indie games of 2022, and Stray rose in many players’ minds for Game of the Year. Cult of the Lamb comes in hot with a sinister twist on the cute and cuddly protagonist game in the best way possible.

Cult of the Lamb is exactly what it sounds like. Players take control of a sacrificial lamb who is saved by The One Who Waits, and to repay your debt, you must start a cult and gather a following in the Lands of the Old Faith. While you cultivate your following, you’ll need to battle in this world of monsters, which is done through randomly generated dungeons, making the experience different each time.

Fans of the horror and roguelike genres are the intended audience for this game, but what might surprise players who aren’t a fan of either of those genres is this title is still for them. This game can appeal to anyone who enjoys survival, building, management, or cute art styles. Due to the procedurally generated dungeons, the ability to name your cult and followers, and the ability to prioritize upgrades, no two playthroughs of this game will be the same. There’s so much to do in the game that players will rarely be bored during their playthrough, especially with the delicate balance players must sustain to build their cult and keep them happy at the same time.

Cult of the Lamb is for everyone

One aspect that sticks out and makes this game different from others is that there just isn’t a whole lot like it. A close comparison is Darkest Dungeon, which has a different art style and isn’t quite as involved as Cult of the Lamb is. I am not a fan of the roguelike or horror genre; in fact, I have both of those genres muted in my Steam list. But I had to try Cult of the Lamb out when I heard how much fun my co-workers were having. To my surprise, I loved it.

Cult of the Lamb is often referred to first as a roguelike game. The dungeons players must navigate through certainly do have a roguelike feel to them and this is one of the best parts of the game, especially since they are different every time. But for gamers who aren’t the biggest fan of the genre, it is still an enjoyable game since the other half is focused on the survival of your cult.

Players will rescue cult members along their journey in the dungeons, and there are some other ways to get them too, like your cult members inviting them or finding them outside of dungeons. You’ll need to be careful how fast you grow your cult, though, because if you aren’t prepared with the necessary equipment and items to support them, you’ll have issues cropping up quickly.

This is where the survival and crafting part of the game comes in. You’ll need to cook food for your cult, build them places to sleep, give them things to do, and ensure your area is clean so they stay healthy. Otherwise, your followers will lose faith in you or die from your lack of care. The more the game goes on, the more difficult the balance becomes between gaining followers and keeping them alive.

Players can name their cult and its members

Be careful, you may start getting attached to your cult members. Players are able to name their cult and its followers, further creating an emotional bond between you and the creatures you rule over.

Not only can you marry one or more of your cult members, you might find there are some cult members who fancy each other, or don’t like each other. Through animations and dialogue, players will get a feel for their personalities and might even be given some tasks to help them form or break relationships.

The interactions players will see even when not actively speaking to cult members adds to the overall feel of the game. It isn’t just that your cult members are there to worship you and nothing else. They are forming their own relationships, living their own lives, and have their own tendencies.

With every cult comes its naysayers—but don’t worry, there are plenty of ways to deal with that. If you have a dissenter in your midst, you can try to take the path of least resistance and simply speak to them and re-educate them, or you can escalate and throw them in jail, sacrifice them, or even murder them if you have the action unlocked. Maybe just murder them out of view from the rest of your followers, though, or your problem may multiply.

It’s a small thought that went into the game that had a huge impact on the players’ experience, but it can also be a heartbreaking mechanic when one of your cult members gets old or dies. The game even has a Twitch integration feature so streamers can name their cult members after their Twitch viewers.

One of the best features of Cult of the Lamb is the random generation of each dungeon. When players go into any of the four dungeons, they’ll have a different experience each time, and there are different paths players can take to get the resources they want. There’s a small map at the top right-hand corner to help dungeon crawlers navigate all of the areas to make sure they don’t miss any, which is helpful when there are several directions players can go in each area of the dungeon.

Each area has different monsters, rewards, and Tarot Cards to make the dungeon experience unique. There are sometimes hidden things players can find in the corners of the dungeon, such as resources or money, so when players head through the game, they are encouraged to destroy just about everything to find things.

The bosses all have different mechanics that could take a couple of tries to master, especially the four bosses at the end of each area. Players will have to defeat The Four, who are responsible for imprisoning The One Who Waits. Leshy, Heket, Kallamar, and Shamura will stand in your way to repaying your debt. When you go into each of these instances, you’ll want to ensure you’ve spent enough time improving your gear and stats to be able to put up a fight against them.

The art, music, and sound design make Cult of the Lamb stand out

Who can resist a cute and cuddly lamb when choosing their next horror adventure? The art style in Cult of the Lamb is probably different from many other games of the same genre. There have, of course, been cute horror games before, but there’s just something about the adorable little lamb running toward the screen making the cutest little evil face you ever did see.

The followers are also cute and you can unlock different forms as you go through the dungeons and progress through the game. You can fully customize each follower to look how you want them to and even color coordinate them if that’s your style of gameplay.

While the art stands out above the rest, the sound and music compliment the visuals. Combat feels so good partly because of the sound effects used when you swing a weapon. The voices of the characters are unique for each of them and can be fun to listen to, especially the sillier-sounding ones.

Characters don’t speak in any specific language audibly; you’ll need to read what they’re saying on the screen. But each character has a unique voice that is a mix between Animal Crossing’s style and the unique but gibberish voices of Ori and the Will of the Wisps. Each character has a different sound and some of them are so ridiculous it’s fun to sit there and listen to them, while others have a calming effect when you hear them.

Is Cult of the Lamb the Game of the Year?

That question will always be answered differently depending on who you ask, but the game is so good that it wouldn’t be out of place to discuss this title when the topic comes up. It’s widely appealing to many players, has great gameplay, and is visually very fun to look at. Any player can find part of the game they enjoy, enough so they can look past all of the parts of the game they don’t like to enjoy the parts they do.

The only complaint many gamers are likely to have is how long the game takes to beat. If players are eager enough, they could speed through the game in one day during their first playthrough. There are enough side quests and tasks to keep the player busy, but even then, players are unlikely to spend more than a few weeks on the game with regular play.

Overall, I can see this game appealing to any gamer, regardless of whether they like the horror aspect of it. Although I’m not a huge fan of horror themes in a game, Cult of the Lamb was just tame enough for me to overlook it for the great gameplay, fun mechanics like naming cult members, and the incredibly satisfying combat.