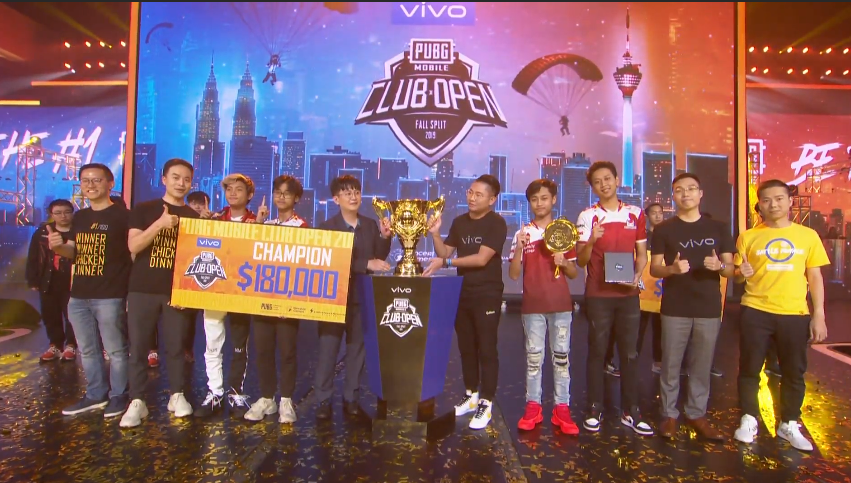 Bigetron Esports have been crowned as the PUBG Mobile Club Open (PMCO) 2019 fall split winners today. The team put up a dominant performance across the three days of competition to amass an impressive 303 points, over a hundred points ahead of the second-placed squad.

The Southeast Asian team had to make it through the preliminary round of the PMCO World Championship to make it to the global finals—and didn’t look back after this. The squad got five chicken dinners in the 16 games of the finals, the most by any team.

The team composed of Made Bagas “Zuxxy” Pramudita, Made Bagus “Luxxy” Prabaswara, Muhammad “Ryzen” Albi, and Nizar “MiCROBOY” Lugatio will get $180,000 with this victory. They will receive an additional $25,000 as well for their five chicken dinners.

While Bigetron sealed their fate as the winners even before the last few games of the finals, the fight for the runners-up and third-placed position went on till the last match. Illuminate The Murder, MEGA Esports, and the defending champions, Top Esports, were all sitting 24 points apart ahead of the final game at Erangel.

Illuminate The Murder fell early in the final match, however. Top Esports and Mega both made it to the last few circles of the game but Top Esports’ Jinhao “Years” Jiang played spoiler to Mega’s plans of a second-place finish as he eliminated the entire squad. Top Esports later went on to get the chicken dinner which cemented them at second-place. Mega Esports finished third, just one point ahead of fourth-placed team, Illuminate The Murder.