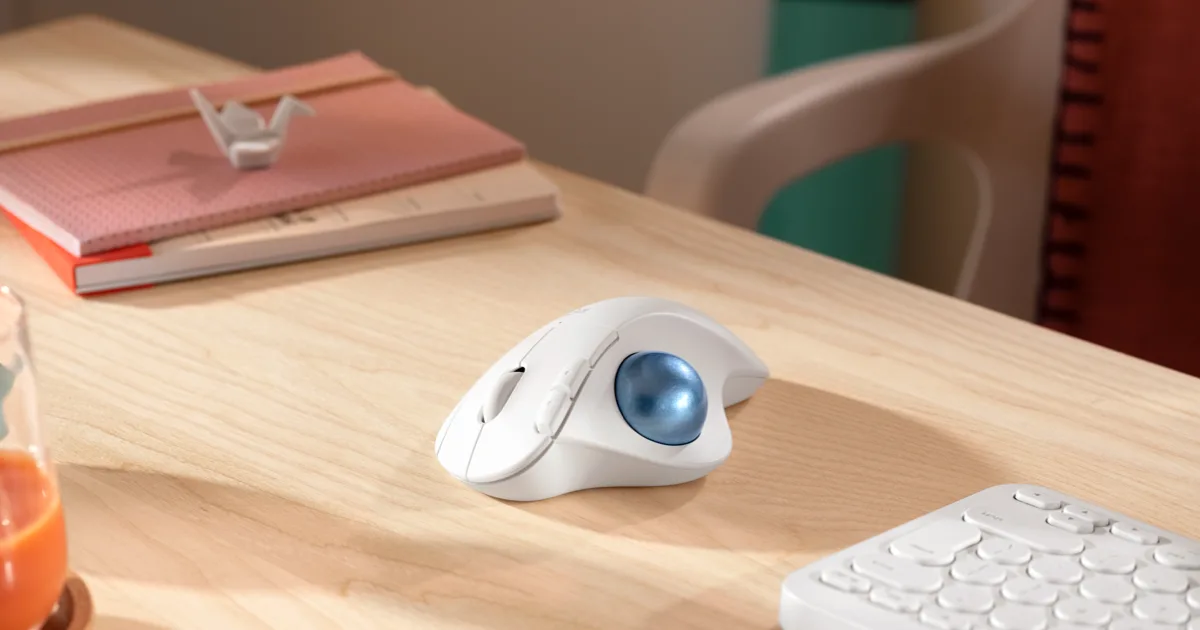 The standard computer mouse hasn’t changed much since it made its way to consumers in 1968. Because of this lack of advancement, those who are unhappy with the standard mouse design are forced to search for alternatives. The trackball mouse is a popular substitute for a traditional mouse, and it’s making a splash in the gaming scene.

Trackball mice have been a favorite of music producers for years, but now gamers are finding the accuracy and convenience of a trackball mouse ideal for gaming as well.

Why use a trackball mouse?

More importantly, a trackball mouse can relieve the strain many users experience with a traditional mouse. Most trackball mice are designed with ergonomics in mind, making them a great choice to fight against carpal tunnel.

For gamers, a trackball mouse can be particularly convenient. This is because FPS games traditionally require low sensitivity, meaning more desk space would need to be set aside for mouse movement.

The Logitech MX Ergo boasts the best of everything. It has most of the key features from the other mice on this list without many drawbacks. This Logitech mouse comes with a rechargeable battery with a 120-day lifespan. The MX Ergo is larger than the Elecom wired mouse, and its grip angle is adjustable. Adjusting the MX Ergo’s angle makes it more like a vertical mouse, increasing its ergonomics.

Most importantly, the MX Ergo sports a wide DPI range from 512 to 2,048. A wider DPI range means more customization options. It also has horizontal scrolling like the Elecom Left-handed mouse.

Logitech’s MX Ergo is special because it connects with up to three computers at once while using Bluetooth, allowing for easier multitasking. The Bluetooth features of the MX Ergo make it a solid choice for productivity outside of gaming. The only feature missing from this mouse is a horizontal scroll wheel. However, the horizontal scroll wheel is rarely used in gaming, so it’s not much of an issue.

The Logitech Ergo M575 connects to the computer in one of two ways: USB receiver or Bluetooth. The USB receiver works up to 32 feet away and is powered by a single AA battery.

Like the MX Ergo, Logitech’s Ergo M575 is specifically designed with ergonomics in mind. It’s targeted toward users who spend a lot of time using their mouse and find traditional mice uncomfortable. The Logitech Ergo M575 also has the traditional back and forward buttons for navigating the web and desktop programs.

The wireless features of the Ergo M575, combined with the minimum amount of desk space required, make this an excellent mouse for players who game on the go.

Elecom’s Wired Thumb-Operated Trackball Mouse is smaller than the other mice on this list. It does not have an adjustable angle of use like the MX Ergo, though. This means the mouse will always be flat and can’t be tilted on its side to enhance its ergonomics further.

This Elecom mouse also comes with a DPI switch that lets users change their sensitivity on the fly. Changing a mouse’s sensitivity with a press of a button comes in handy in any FPS, specifically when sniping. It also has five buttons positioned on the mouse, making it a solid choice for MMO gamers.

However, Elecom Wired Thumb-Operated Trackball Mouse’s smaller size could be a problem for some users. Those with larger hands will have difficulty using this mouse comfortably.

The Elecom Left-handed mouse can change its DPI with a press of a button. All of the mice in the EX-G series have optimal tracking technology for the precise movements needed in gaming.

Unlike the M575, this mouse toggles between low energy and high energy mode, giving the Elecom Left-handed a longer battery life than the other wireless mice on this list.

The Elecom Finger-Operated Trackball Mouse is controlled by more than just a user’s thumb. A finger-controlled trackball mouse differs from a regular trackball mouse by having the ball mounted on the top and usually features a larger trackball. Having the trackball on top might feel foreign for gaming due to its lack of right and left-click buttons.

Like the Elecom Thumb-Operated Trackball Mouse, this mouse’s accuracy is further enhanced by a red ball tracking system. The mouse’s optical sensor paired with the red ball makes for a more accurate tracking experience than conventional trackball mice. Elecom’s finger-operated trackball is larger than a thumb-operated trackball, allowing users to move their trackball without their cursor moving great distances.

The top-mounted trackball does have some downsides, though. Users won’t be able to adjust their DPI on the side of their mouse like the side-mounted trackballs on this list. It will also take some time to get used to the unique design of a finger-oriented trackball mouse.