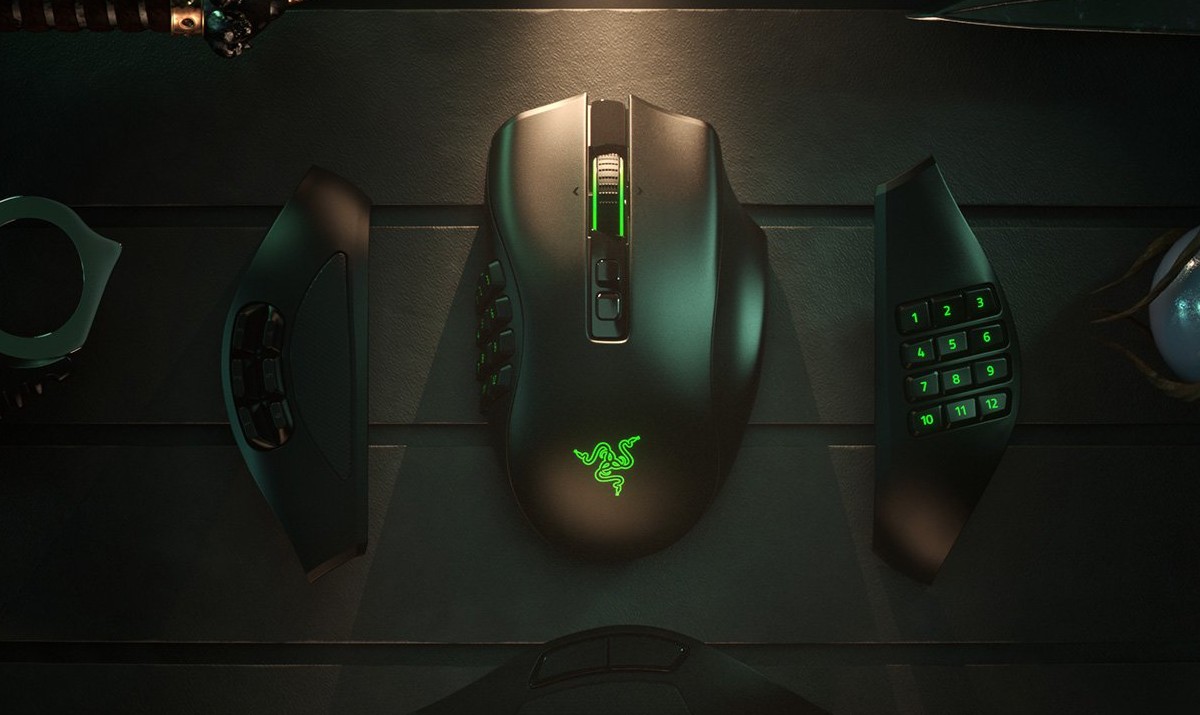 Razer is a Singaporean-American company known for its gaming mice, headsets, and keyboards. Recently, Razer has branched out into making smart glasses and webcams.

The products in the Razer portfolio have a distinctive look to stand out from other brands. They are generally black with green accents and feature the Razer snake triskelion logo.  Many of the products use a similar design theme making them instantly recognizable.

When it comes to mice, Razer has a reputation for innovation. Whether it’s the three-in-one Naga Pro or the super-fast Viper 8KHz, the company continuously pushes the performance boundaries. Razer even has ambidextrous and left-handed versions of some of its mice, making them accessible to everyone.

Something that differentiates Razer mice from many competitors is the use of in-house sensors and switches. Many of Razer’s mice feature high-performance optical switches and optical sensors that you won’t find on other brands. Some of the company’s mice also feature a wireless technology they call Hyperspeed. The Hyperspeed technology allows the mouse to adapt to the fastest wireless frequency available to maintain a stable connection.

These are the best Razer mice currently available.

The Razer Viper 8KHz takes things to the next level with its incredible polling rate. Most gaming mice top out at around 1000 Hz, but the Razer 8KHz is the first mouse to hit 8,000 Hz. The high polling rate means the Viper 8KHz has precise tracking abilities because it reports to the PC 8,000 times a second. It also has a click latency of just 0.125 ms. If you want the full benefits of the 8,000 Hz polling rate, you’ll need a monitor with at least a 144 Hz refresh rate and a keen eye.

Apart from the polling rate, the Viper 8KHz has other impressive features. The Viper 8KHz uses Razer’s Focus+ optical sensor capable of 20,000 Dots Per Inch (DPI) sensitivity and speeds up to 650 Inches Per Second (IPS).  Razer’s second-generation optical switches are also part of the package. These switches are known for their responsiveness and have an expected lifespan of around 70 million clicks.

Left-handed users will appreciate the design of the Viper 8KHz. It has a true ambidextrous shape and two buttons on either side, making it comfortable in either hand. Apart from the side buttons, there’s also a scroll wheel and a DPI adjustment button at the mouse’s bottom. The Viper 8KHz is relatively light at only 71 grams, and the medium size should suit most users. The rubberized panels on the sides are a nice touch to help you get a secure grip.

Razer’s Viper 8KHz is an excellent choice if you’re looking for an ambidextrous mouse with outstanding performance. It’s also quite affordable for such a high-spec mouse, sitting at the same price as the regular Viper.

The Razer Naga Pro has a modular design and includes three magnetic side panels with different functions. One panel features 12 buttons in a grid layout that are ideal for games like League of Legends.  Another panel has six buttons configured in three buttons per row. All six buttons have a ridged shape, making it easy to find the right button. The last panel resembles a conventional mouse with just two buttons in a horizontal layout. The standard buttons include the left and right-click buttons, a scroll wheel, and two DPI adjustment buttons.

Some of the features are similar to the Viper 8KHz. The Naga Pro uses the same Razer optical switches, and it also uses the same Focus+ optical sensor with a 20,000 DPI sensitivity and 650 IPS. These performance features combined with the removable side-panels make the Naga Pro one of the most versatile mice out there.

The Naga Pro has excellent functionality, but it’s quite pricey. If you don’t need the extra buttons, it may be worth getting the Viper 8KHz instead.

The Razer Basilisk Ultimate uses a more traditional format. It’s designed for right-handed use with 11 programmable buttons. One of the features you don’t see on many mice is the removable paddle button on the left side. There’s also a button at the bottom of the mouse that allows you to switch between the five onboard profiles without needing software. The scroll wheel’s feel can be programmed for smooth or tactile operation, and it has tilt functionality. The tilt ability lets you use the scroll wheel for additional functions like in-game abilities or navigating web pages.

Check out the latest Gaming Mice on Razer.com

Another area where the Basilisk Ultimate stands out is the RGB lighting. The Viper 8KHz and Naga Pro have minimal RGB lighting, but the Basilisk Ultimate goes all-out with 14 individual lighting zones. The zones include the scroll-wheel, logo, and the two LED strips running down each side. All the lighting is configured with the Synapse app, and it can even sync with other supported Razer products like headsets or keyboards.

Razer’s Basilisk Ultimate shares many features with the previously mentioned mice. Similar features include the optical switches and the 20,000 DPI sensor. Like the Naga Pro, it has wireless capability and can be charged wirelessly using a dock or directly using a braided Micro-USB. Where it differs from the Naga Pro is the lack of Bluetooth capability.

Unfortunately, there are a couple of drawbacks to the Razer Basilisk Ultimate. At 107 grams, it might be a bit heavy for some users. It’s also costly, especially when you factor in the separate wireless charging dock. Otherwise, it’s a solid choice with practical features.

The Viper Mini is one of the smallest mice in the Razer range. It’s geared towards gamers wanting a lightweight mouse and measures just 4.66 by 2.11 by 1.51 inches. It’s also very light at only 61 grams compared to the 71 grams weight of the Viper 8KHz.

To keep the weight down, Razer had to remove some of the features found on the full-size Viper 8KHz. The two extra buttons on the right side are gone, and so is the textured finish. Instead of the 20,000 DPI sensor found on the other mice in this review, the Viper Mini uses an 8,500 DPI. The DPI might be lower, but it’s still more than enough for most gamers.

Some features on the Mini carry over from the Viper 8KHz. The Mini uses the same Razer optical switches, and it also has configurable RGB lighting. The Mini’s overall appearance is symmetrical like the rest of the Viper range but is scaled down to a more compact size.

One of the main reasons to get the Viper Mini is the price. It costs a fraction of the other mice on this list and is an affordable entry point into the Razer brand. That said, it won’t fit everyone’s hands and is only appealing to gamers wanting a small and lightweight mouse.

The V2 is the latest version of Razer’s DeathAdder. The original DeathAdder came out in 2006 and has evolved over the years. One of the reasons for its immense popularity is its ergonomic shape that fits most users. That said, the Deathadder V2 is shaped for right-handers with a curved shape and buttons on the left side only.

One of the reasons for the DeathAdder’s longevity is the design. All the buttons are easy to reach and have a conventional layout familiar to most users. One of the V2’s improvements over its predecessors is the placement of the DPI buttons. They sit just behind the scroll wheel and are spaced out, so it’s difficult to press the wrong one by mistake.

The Razer DeathAdder V2 offers solid price-to-performance value. It has the same sensor, optical switches, and profile change button as Basilisk Ultimate but comes in at a much lower price.