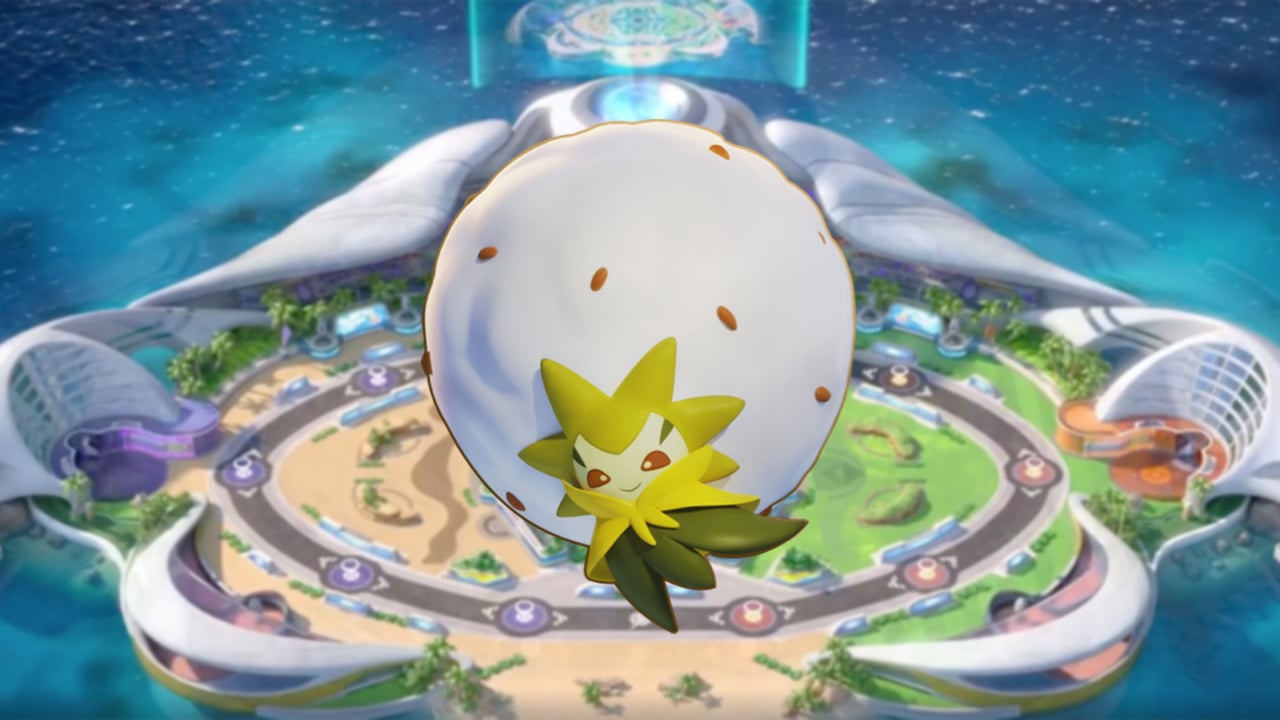 Certain Pokémon seem built to play very focused roles in Pokémon UNITE. And, as the only dedicated healer in the game at launch, Eldegoss is a viable pick for pretty much any battle.

Eldegoss isn’t overly bulky, but it won’t be an easy target for any opposing Pokémon in a one-on-one matchup. It has options to deal decent damage, heal itself with increased movement speed, and retreat from a losing fight.

Eldegoss is one of the choices TiMi Studio gives players as a starter after clearing the tutorial. Most players may not pick it due to Eldegoss being a newer Pokémon, and slotting up against favorites like Pikachu and Charizard doesn’t help its odds.

If you enjoy playing support and healing your teammates, however, the Grass-type is an amazing option. And even if you don’t pick it, you can still purchase its Unite License from the shop for 6,000 Aeos coins, or 345 Aeos gems, since Eldegoss counts as a novice-level Supporter.

Here is the best build you can default to for Eldegoss if you plan to hold down the backline and support your teammates as they likely get in over their heads during combat.

Eldegoss will often deal passive damage with Pollen Puff, especially when it comes to bigger waves of wild Pokémon or teamfights. The Shell Bell ensures you will be able to heal a base 45 HP when landing Special Attacks, plus an additional percentage of that stat. That amount can ramp up once you get Cotton Guard and become harder to take down overall.

Alternatively, Leftovers works just as well in this spot if you don’t feel comfortable being in the thick of combat or are going for a more passive build.

This might be one of the only builds that utilize the Exp. Share to its full potential right now, since you are likely going to be focused on staying back and healing and won’t be getting as much XP. You will most likely be the lowest level on your team, so this will give you a constant flow of XP as long as you’re on top of your level scaling and aren’t wasting the boost.

If you don’t feel like you are behind on levels that often, taking the Rocky Helmet or Focus Band to boost your defenses or provide a bit of residual damage is a good backup option.

Since you are mainly playing hard support as Eldegoss, the Buddy Barrier gives you and the nearby teammate a temporary shield with the lowest HP. This is optimal for pushing lanes: not only can you potentially get yourself and your laning partner out of a sticky situation, but you could also use it offensively and push for a dunk to take a point, even when under pressure.

Just like with the other items, Eldegoss is flexible and can use many Held Items effectively. Aeos Cookies is a good substitute here if you think you are better at scoring goals than timing your Unite move.

Most players just stick with the standard Potion to make sure you can live a few extra hits or survive in combat long enough to use your bigger healing moves that are on cooldown. It works well in almost every situation, especially if you have teammates that can keep you safe.

If you can’t (or don’t want to) rely on your teammates to keep you from getting pinned down, the Eject Button lets you blink away to safety or even push forward and potentially save a teammate with some heals. The extra utility makes Eject Button a solid choice.

Even though Eldegoss is a Supporter, there’s no reason to start with Synthesis over Leafage. Going on the offensive early on may help the teammate running in the lane with you defeat the wild Pokémon more quickly, which will net you some XP and get you to the healing move more quickly anyway.

Right as you evolve from Gossifleur into Eldegoss, Leafage can become Pollen Puff or Leaf Tornado. Both have their uses, but Pollen Puff does damage to opponents and heals your teammates within a pretty wide area. It is especially good for teamfights and clearing groups of wild Pokémon.

Getting a defense boost is one thing, but doing so while also healing your teammates and increasing their defense is too good to pass up. Once you get this move, you will likely become the focal point of enemy gankers and the first one to get focused down in a teamfight, so the extra survivability helps considerably.

Eldegoss’ Unite Move gives it a ton of utility. Activating Cotton Cloud Crash makes the Pokémon untargetable, so you can easily use it as an escape option if the enemy pins you after a failed gank or push. If you click the move again, Eldegoss will come crashing down, displacing enemies, dealing some damage, and healing your allies in the fairly large area of effect.