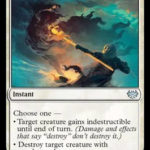 The first three days of Innistrad: Crimson Vow previews highlighted the set’s strong tribal themes. Zombies, Humans, and Spirits are receiving the lion’s share of support in the set with Werewolves and even Frogs getting some love.

Previews for Crimson Vow were light on power on Oct. 30. Many of the 10 cards revealed were solid Limited Commons and Uncommons without much a future in Constructed formats.

There were a handful of cards with clear potential in Standard, though, and they can make a splash when Crimson Vow releases digitally on Nov. 11, with a tabletop launch on Nov. 19.

This is a powered-down version of Mazemind Tome. This colorless Artifact is a solid glue card for decks that need consistent card draw, but don’t have access to it naturally in its part of the color pie.

This is tricky card to find a home for. Aggro decks would rather play a two-mana Creature early. By the time Investigator’s Journal could take advantage of the card draw, the opponent should already be dead.

Investigator’s Journal could find a home in tap-out control decks that want some incidental card draw available. This could also be strong in a potential Clue deck in Standard.

Finally, White is getting a cool card that isn’t a three-drop. This four-mana Creature has a few strong qualities. A Flash 3/4 Creature is a decent threat in combat, able to surprise block when necessary.

With the influx of graveyard cards from the two Innistrad sets, the ability to exile a card from a graveyard is powerful. Even if that’s all the card did, it’d be a decent playable out of the sideboard.

The great part about Cemetery Protector is its token-generating ability. This can turn land drops into tokens if you decide to exile a land. You can also exile a Creature from your graveyard and have any Creature you cast enter with a 1/1 body alongside it.

There aren’t many four-mana options in Mono-White Humans so Cemetery Protector should fill that slot if decks want to extend their mana curve a little bit.

Valorous Stance will find its way into Standard decks. This two-mana protection spell doubles as removal for an opponent’s large threat. This could be useful in Mavinda Magecraft build that uses Mavinda, Student’s Advocate, Leonin Lightscribe, and Clever Lumimancer with spells to create massive Creatures.

In White decks that are focused on protecting a single Creature, Valorous Stance will be useful and should rarely be a dead card in hand.