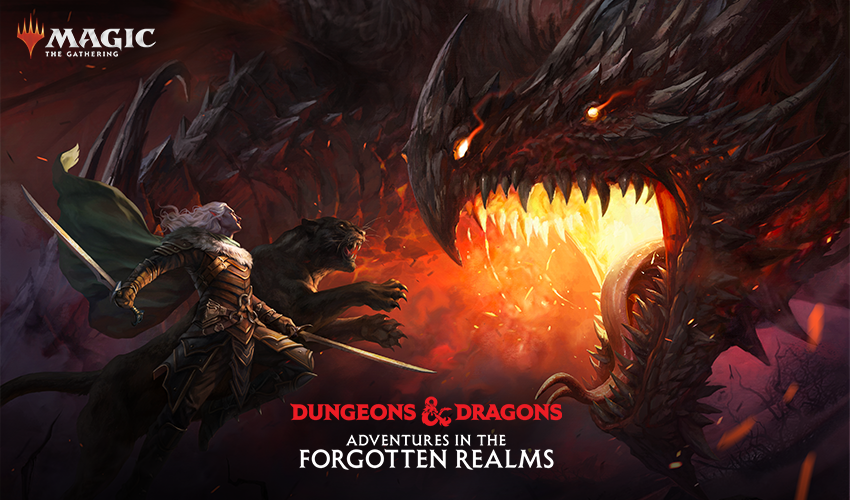 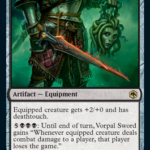 After several years of Magic: The Gathering crossing over into Dungeons & Dragons, the world’s biggest tabletop role-playing game will join forces with Magic for Dungeons & Dragons: Adventures in the Forgotten Realms, the first crossover set in Magic’s history.

The two properties are both in the Wizards of the Coast family, making the cross over a natural transition. Adventures in the Forgotten Realms is a main expansion that brings D&D mechanics and flavor to the card gam,e which started as a way for adventurers to pass time in between D&D sessions.

During today’s Weekly MTG stream on Twitch, Wizards showed off a handful of preview cards for the upcoming set, including Legendary Creature Tiamat. The official spoiler season for Adventures in the Forgotten Realms starts on June 29.

This magical item came to D&D inspired by the vorpal blade from Lewis Carroll’s poem Jabberwocky. In D&D, Vorpal Sword can instantly kill a creature with at least one head on a perfect 20 roll. This instant kill property is translated into this card well. Vorpal Sword is a cheap equipment to cast and equip.

At its core, Vorpal Sword will make a Creature a devastating threat in combat. +2/+0 and Deathtouch are two strong abilities. This will force unfavorable blocks and could combo well with First Strike equipment like Maul of the Skyclaves.

The activated ability is literally game-winning. When a creature equipped with Vorpal Sword deals combat damage to a player they lose the game immediately. The threat of activation with this equipment is real, even if it takes eight mana to use. Evasive abilities like Trample, Menace, or Flying could lead to surprising victories.

A Portable Hole is a cloth that, when opened, creates an extradimensional hole that is 10 feet deep and can be used to hold, or trap, creatures and objects. Portable Hole is a one-mana Artifact that acts in a similar way to its D&D counterpart. Portable Hole can exile a nonland permanent with a mana value of two or less until it leaves the battlefield.

Portable Hole can be used to shut down key Creatures like Luminarch Aspirant or Fervent Champion in aggressive strategies. The card being able to hit any nonland permanent opens the door to take out an opponent’s key Artifact or Enchantment. Some early targets this hits is Improbable Alliance and Mazemind Tome.

Power Word Kill is a 9th level spell that causes a Creature within range to instantly die if they have 100 or fewer Hit Points. There are a lot more limitations on the Magic card of the same name. Power Word Kill is a cheap, but conditional removal spell. There aren’t a ton of Angels, Demons, Devils, or Dragons running around Standard. However, there are enough to make Power World Kill an awkward fit into main decks.

This is compounded with the knowledge that Adventures in the Forgotten Realms will have a Dragon tribal theme.

Power Word Kill could show up in some sideboards. It is a good removal spell without some of the limitations of Heartless Act and Eliminate. This can hit Creatures with counters on them and high Mana Value threats.

Innkeepers are a staple in almost every D&D campaign. They give quests, provide a place for adventurers to rest, and are generally delightful people. Prosperous Innkeeper is a strong utility Creature that should see plenty of play in Standard and Historic. The 1/1 Creature enters the battlefield with a treasure that helps you ramp.

The real value of the card comes with the second ability. Gaining life when other Creatures enter the battlefield is enough to recover against an early aggro onslaught or get out of Embercleave range. Prosperous Innkeeper will be strong in Historic Collected Company decks. In Standard, the Halfling Citizen could be a great two-drop in Winota, Joiner of Forces decks.

Adventures in the Forgotten Realms releases digitally on July 8 with a full tabletop release on July 23.