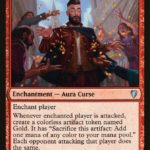 Commander preconstructed decks have been a place where Wizards of the Coast can reprint Magic the Gathering staples in the format that are creeping up in price.

The main set of Commander Legends: Battle for Baldur’s Gate focuses more on introducing new cards over including high-value reprints. However, the set’s four preconstructed decks are loaded with reprints of Commander staples and key spells in specific archetypes.

The name’s of each precon deck are:

Each precon includes 10 new cards with the rest being reprints. While the decklists have a number of solid reprints like Sol Ring or the two-color talismans, there are eight cards that stand out above the rest.

Battle for Baldur’s Gate is set for a global release on June 10. The fully draftable Commander-focused set is set for a prerelease weekend on June 3.

Here are the top reprints from the Battle for Baldur’s Gate precons.

This Red staple was sitting around $20 and the reprint in the Exit from Exile precon should lower the price. Jeska’s Will is an excellent piece for spellslinger decks looking to lengthen a big turn. Being able to Red mana equal to the number of cards in an opponent’s hand and impulse drawing three cards is plenty of gas to keep things going.

This staple White reanimation spell is returning in the Party Time precon. Sitting at $10, this card can reanimate many of the best cards with mana value three or less. Notably, Sevinne’s Reclamation hits any permanent type.

The flashback ability lets you copy the spell when it’s cast. This card can represent returning three cards from your graveyard to the battlefield.

Skullclamp is an auto-include in any kind of token deck. Because Skullclamp is needed in almost every token list contributed to its $10 value. A reprint in the Party Time precon is a welcome addition for Commander players. In decks running 1/1 tokens, Skullclamp essentially says “pay one mana, draw two cards.”

It’s an important draw engine in decks and colors that don’t have access to the card efficient card draw in Blue. Skullclamp is also great in Aristocrats decks as a way to both fire off death triggers and draw cards.

Mutavault isn’t just a useful card in Standard but a key card in some Modern and Legacy decks. This multiformat utility land is showing up in Party Time. Sitting at $10, Mutavault is a worthwhile reprint.

It fits perfectly into the deck’s theme of Party. Since Mutavault can be all Creature types, it’s an effective way to get that last Party member to trigger some of the deck’s payoffs.

Decks that run plenty of impulse draw effects generally run Laelia, the Blade Reforged. It’s a threatening Creature that grows over time and impulse draws a card whenever it attacks. As both a Commander and in the 99, Laelia is a strong card and that’s why it sits at a $6 value. The reprint should help the price go down for this Creature printed in Commander 2021.

At a $15 value, this is a strong reprint in Draconic Dissent.

Goad is a major mechanic in Commander Legends: Battle for Baldur’s Gate. Curse of Opulence could get better because of players being forced to attack from Goad triggers.

Black decks have the ability to generate massive amounts of mana at once. Black Market is a staple Enchantment that makes Black mana at the beginning of the precombat main phase. This is a great card to enable common Black finishers like Torment of Hailfire or Exsanguinate.

The staple card sits at $5 and is reprinted in the Mind Flayarrs precon.

Commander players love Leyline of Anticipation. Being able to cast spells at Instant speed and the potential to start the game with this Enchantment on the battlefield is a mouthwatering proposition for many players.

When Leyline of Anticipation enters the battlefield it shifts the dynamic of the game. This is the reason the card has a $7 value and is being reprinted in the Mind Flayarrs precon.