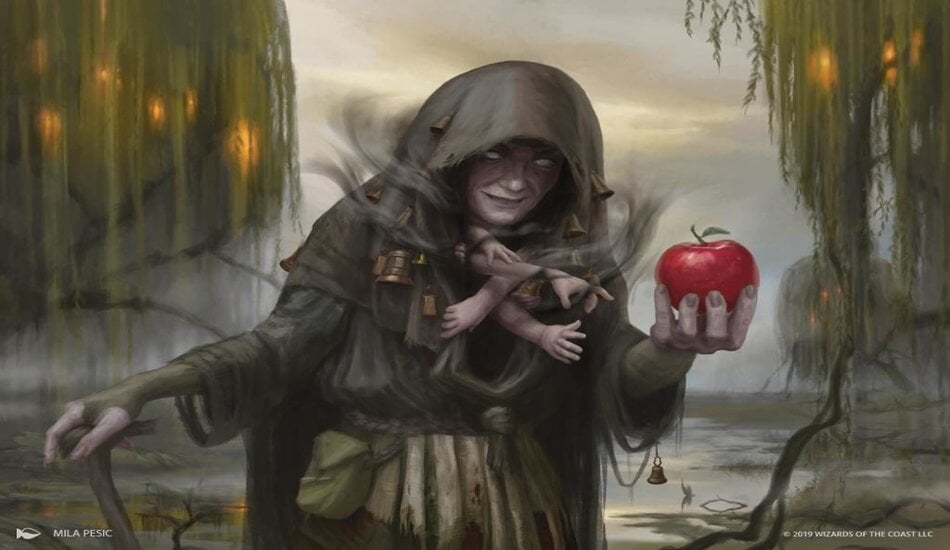 Sliding nicely into the Throne of Eldraine Knight tribal theme, Foulmire Knight is a solid one-drop Magic: The Gathering showcase card players want to see in a new set.

The hype surrounding the upcoming release of Throne of Eldraine (ELD) is real, as Mark Rosewater and the design team seem to have hit a home run with the new mechanic Adventure. Released as an ELD spoiler earlier today, Foulmire Knight/Profane Insight stands out as a reason why Adventure and showcase cards have a future in MTG.

Coming in under the radar during ELD spoilers, Foulmire Knight is a single black mana creature with deathtouch. On the Adventure side of the showcase card, it’s Profane Insight—a three-mana spell that cantrips (draws a card) at the cost of one life point.

Much like Order of Midnight, Foulmire Knight is a versatile card whether at the beginning, middle, or end of a match. As a one-drop, having deathtouch for one mana is the icing on the cake (or gingerbread cookie). This is especially true in the Limited Draft format.

Profane Insight costs slightly more (three mana) but draws a card, creating tempo when needed. The only downfall to Profane Insight is that it also costs a life point, making it less feasible in the grand scheme of deck construction. In Limited, however, the one-drop showcase card is still worth drafting.

Magic’s Throne of Eldraine set with Foulmire Knight and Profane Insight releases on Oct. 4 via tabletop and Sept. 26 via MTG Arena and MTGO. Pre-release for the MTG set will take place Sept. 27 to Sept. 29.