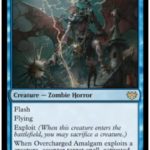 Crimson Vow is the final set of the year that releases on Magic Arena and Magic Online on Nov. 11 followed by a full tabletop release on Nov. 19.

From the return of beloved characters to experimental new mechanics, here are the best spoilers from day one of Crimson Vow previews.

Wizards of the Coast started the spoiler season off with a powerful reprint that will make a day-one impact on Standard. Thalia is a staple two-drop in Humans decks in every eternal format. Its ability to slow down noncreature spells will give Mono-White Aggro a great answer to the best cards in Standard at the moment.

Thalia’s ability will tax Alrund’s Epiphany, Galvanic Iteration, Expressive Iteration, Blizzard Brawl, and Esika’s Chariot. Making these Standard powerhouses cost one extra mana greatly impacts their effectiveness. Even delaying the opponent by one turn is enough for Mono-White Aggro to run them over.

Six-mana plays should probably put you in a position to win the game. Sigarda’s Summons does that. This Enchantment turns every Creature you control with a +1/+1 counter on it into a base 4/4 Flying Angel. This is a huge boost and it’s important to remember that the counters remain on the creature.

When Sigarda’s Summons comes down, you’re gaining an army of 5/5 or 6/6 Flying threats. You will either kill the opponent on that turn’s combat step or present a dangerous two-turn clock.

By building a Commander deck around cards like Luminarch Aspirant and Savior of Ollenbock, it won’t be difficult to give each of your Creatures a +1/+1 counter to set up the turn six play.

The three-drop slot in Mono-White Aggro is crowded. Savior of Ollenbock gives these decks another playable option to experiment with when deck building. This 1/2 with Training gets bigger with each attack and can exile an opposing blocker before the declare blockers step.

Overcharged Amalgam is sweet. At its worst, this card is a four-mana counterspell. It can Exploit itself to use the counter ability.

With some build-around cost, Overcharged Amalgam is an excellent card that ties the B/U Decay archetype together in Standard. This can come in, Exploit a Decay token, and counter a spell, activated ability, or triggered ability.

Generally, you’ll want to counter a spell, but there are some niche occasions where countering an ability will be the best move. It never hurts to have options.