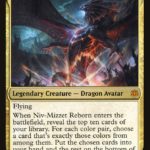 The color identity rule is what differentiates Commander decks from other formats. In 60-card formats like Modern, there’s no limit on the colors you can play. A deck can be mainly Blue and White and run one off-color card to attack edge cases.

That’s not the case in Commander. Decks can only run cards that are within the legendary Creature’s color identity. This doesn’t only include the mana symbols in the mana value, but any symbols in the card’s text.

There are 33 five-color Commanders in the format. They have access to the largest card pool. Unfettered access to any card legal in Commander does lead to some homogenization among five-color decks. But, the best of these options support a more interesting play experience than jamming the best 99 cards into a pile.

Here are the best five-color legendary Creatures in Commander.

Najeela has the most linear game plan out of the bunch—it’s a game-winning combo piece on a stick. Sitting down at any table with Najeela you’ll most likely become public enemy number one and for good reason. This three-mana Creature wins the game through infinite combat steps.

The combo is done in several different ways. Cryptolith Rite turns every Creature into mana dorks. Use the tokens Najeela creates to pay for her activated ability and get additional combat steps.

A strong Najeela deck will run dozens of redundant combos that can win the game out of nowhere. It’s a powerful cEDH deck that can play well into lower power tables with a dedicated Warrior or Ally list.

With Golos, Tireless Pilgrim banned in Commander that leaves Kenrith as the best five-color ‘good stuff’ card. Kenrith has five activated abilities that make him a self-contained engine. He can draw cards, give Creatures haste, grow Creatures, gain life, and reanimate.

Kenrith doesn’t lean into any particular strategy so players can use their imagination when crafting their builds. From group hug to +1/+1 counters, Kenrith is capable of it all. You can learn into parts of his color identity or go full-on Mythic Rare tribal.

Dragon tribal is an exciting Creature archetype. Dragons are expensive and have flashy effects. For players interested in showing off and becoming the center of the table, The Ur-Dragon is perfect.

There are two main Commanders for Dragon decks. Tiamat is the best budget option but doesn’t provide much outside of a big body and tutoring. The Ur-Dragon offers cost reduction and cheats Creatures onto the battlefield.

The Eminence ability makes Dragons cost one mana less. The attack trigger is another effective way of getting more than one Dragon onto the battlefield in a turn. The Ur-Dragon is hard to cast, but all you need to do is cast it once and win the game shortly after.

Morophon was printed in Modern Horizons to solve the problem of niche tribal strategies not having a synergistic option as Commander. This colorless Creature with a five-color identity was built to support any tribe from Elephant to Kithkin.

The +1/+1 anthem effect is nice, but the key piece of Morophon’s kit is the cost reduction. It helps deal with the color costs of Creatures. The ability smooths out any potential mana issues for three, four, or five-color lists.

Things get better for multi-color Creatures whose mana value consists of mostly colored mana. Morophon can turn these Creatures from four mana to only cost one.

It’s a straightforward game plan. Get your five colors online then cast The First Sliver. The constant cascade triggers will take it from there.

Many five-color Commanders can end up as generic decks with Green ramp leading into commonly-played Mythic Rares. Niv-Mizzet Reborn forces you into some creative deckbuilding. Niv-Mizzet Reborn wants to primarily play two-color spells.

In War of the Spark, Niv-Mizzet became the living guildpact. To represent this, when he enters the battlefield you can get any two-color spell from the top 10 cards for each guild color pair. You want this ability to find as many spells as possible.

Many of the slots found in most decks need to be occupied by two-color options. This leads to running cards that are powerful, but not typically run in other decks. Here are some cards that fit into the Niv-Mizzet theme.