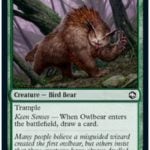 Utilizing every Dungeon & Dragons: Adventures in the Forgotten Realms mechanic in conjunction with big creatures, the color Green will likely have a major impact on the Limited meta.

Green sticks to its roots in AFR with a number of big creatures with a reasonable casting cost and unique combat tricks. The MTG color also utilizes flavor word mechanic Pact Tactics, d20 roll, Venture, and Ward. Scheduled to release digitally on July 8 and globally on July 23, the AFR set will introduce an owl that’s also a bear, a worm that is not a wurm, and a bard that likes to venture into a dungeon.

Here are the best AFR Green Uncommon and Common cards in Limited.

A five-drop with 4/4 stats at Common rarity is a solid middle pick in Draft. Owlbear has an increased value, utilizing the MTG keyword Trample and an enter-the-battlefield (ETB) effect that draws a card. Owlbear slots right into Treasure matters and ramp builds, providing solid pressure and defense four turns into a match.

Purple Worm is the Green powerhouse creature at Uncommon rarity. The worm is a seven-drop whose casting cost is reduced by two if a creature died that turn. Once out on the battlefield, Purple Worm is an 8/7 with Ward Two protection.

BG Sacrifice builds can use Purple Worm as a finisher, along with ramp/Treasure matters decks. A lack of evasion is the only downside to Purple Worm.

Blue hate in AFR comes in the form of an Instant called Hunter’s Mark. It’s a four-drop that only costs one Green mana to cast if it targets a Blue permanent you don’t control. As an added bonus, the Instant can’t be countered.

The actual spell on Hunter’s Mark pumps a creature +1/+1 until the end of the turn. The target creature with the counter then deals damage equal to its power at a target creature or planeswalker that you don’t control. At four mana it’s a middle-of-the-road card, but against Blue decks, Hunter’s Mark is a top-tier Instant.

Hill Giant Herdgorger is another big Green creature in the six-drop spot. The giant is a 7/6 that has a “gain three life” ETB effect. Hill Giant Herdgorger’s mana cost is spot-on with the giant’s stats, providing solid defense, offense, and life points during the late-game stages of a match.

Big creatures with Flying are hard to deal with in Draft, which is why Green Dragon will still have an impact on the AFR Limited meta. As a six-drop 4/4 Flyer, Green Dragon is a backup win condition.

The Uncommon dragon also has an ETB effect that effectively grants every creature you control Deathtouch until the end of the turn. Holding off attackers for Green Dragon to fly in for lethal is a solid win condition. Its ETB effect is also applied to any target pinged for damage.

Lurking Roper is a top-tier three drop chump blocker who improves offensively with Lifelink support. The horror buys time to set up board state and can attack on turn three in conjunction with life gain.

Aura’s aren’t typically top picks, activating a Sorcery speed. Find the Path is different. The Aura enchants a land, producing an additional Green mana every time it taps. It also activates Venture upon entering the battlefield.

Find the Path’s three-drop cost is slightly high but is made up for through the Venture activation in builds that want to utilize dungeons.

You Meet in a Tavern

Straying from the norm like Find the Path, You Meet in a Tavern is another Sorcery speed spell worth main decking. The Green spell is a four-drop, providing multiple options. Option one fetches up to five creatures from the top five cards of your library and puts them in hand. In Limited, a 40-card deck format, You Meet in a Tavern will likely succeed in a deck containing around 18 creatures.

You Meet in a Tavern’s second option pumps every creature you control +2/+2 until the end of the turn. The Sorcery spell is a good backup win condition in RG and WG and can save a match with its first option should you mana flood or run out of gas.

Honorable mentions: Choose Your Weapon and You Happen On a Glade 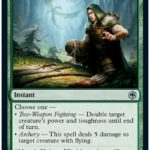 Choose Your Weapon is another multichoice spell, but at Instant speed. Players can choose to either double a creature’s power and defense until the end of a turn or deal five damage to a target creature with Flying.

Having a creature with Reach is better than a three-drop instant removal spell, but doubling power and toughness on a big Green stompy creature is a solid combat trick. The damage option is more of a “sideboard” option.

You Happen On a Glade is slightly more versatile than Choose Your Weapon in that it fetches land or can return a target-permanent from the graveyard to hand. Both AFR Instant Green three-drop spells are good and shouldn’t be overlooked during later picks.