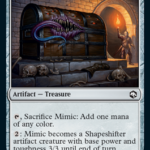 Artifacts aren’t a focus in Dungeons & Dragons: Adventures in the Forgotten Realms outside of a few key spells that may be played in Limited builds.

The colorless spells support some of the major themes in the set. For a set that doesn’t use colorless Artifacts very much, Venture is the mechanic that takes advantage of these cards. There are two Artifacts that act as repeatable Venture triggers.

Here are the three best Common and Uncommon colorless spells in Adventures in the Forgotten Realms.

The Dot Esports exclusive preview card is a good three-mana rock that’s a repeatable source of Venture. It’s not a flashy spell but is able to help any deck gain value from the set’s three dungeons. This will probably be more valuable in Sealed rather than a Draft environment.

There’s a lot of value here for a one-mana Artifact. The first tap ability is generally irrelevant. The worth of this card comes from its second and third activated abilities. Locking down a Creature is a great effect. Even a more expensive, weaker Icy Manipulator is still worth some consideration as a 23rd or 24th card.

Being able to Venture for four mana works well as a filler in any deck. Even without a dedicated Venture theme, Fifty Feet of Rope will help you finish a dungeon.

This is an unusual choice, but Mimic looks like it could steal multiple games. For a set that doesn’t care about Artifacts, a card that becomes a 3/3 Creature could get in some unexpected damage. It can be sacrificed for a mana, but the value of the card seems to come from the ability to surprise an opponent in combat.