Tectonic Giant shakes up elemental archetype in Theros: Beyond Death 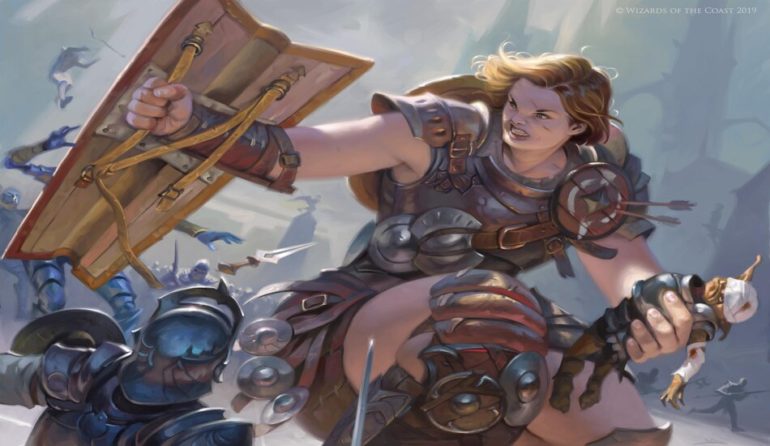 The first elemental creature dropped today in the Theros: Beyond Death spoilers, and it’s loaded with damage value in Red.

Elemental archetypes got some traction in Core Set 2020 with the release of Risen Reef. And the decks could thrive in Theros: Beyond Death (THB) once again with Tectonic Giant. Packed with value and a CMC of four, two Red, the giant has bolt damage and card draw advantage.

Tectonic Giant has an attack power of three, but can also deal three burn damage when it attacks. And it deals three damage when it’s targeted by an opponent’s spell. But when bounced by Teferi, Time Raveler, it doesn’t trigger.

But it’s most powerful when utilized for its other attack ability, card draw advantage upon attacking. Similar to Light up the Stage without a mana cost ability, Tectonic Rift can rapidly increase the tempo of a match. And in an elemental deck with Risen Reef, the board state has the potential to get out of control quickly.

There are other possible combinations in Standard Constructed too using Torbran, Thane of Red Fell for extra damage dealt. And for some extra spiciness, a combo attack with Ilharg, the Raze-Boar. But don’t count out THB Limited Draft play either, as the value attached to Tectonic Giant could easily swing advantage during a close match.

Test out the possibilities of Tectonic Giant with the release of Theros: Beyond Death on Jan. 16 via digital platforms and officially on Jan. 24.